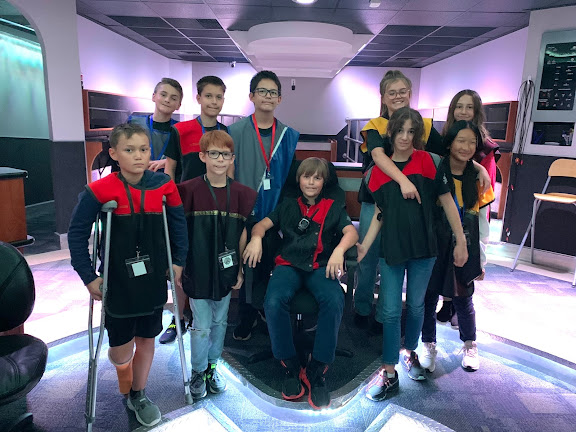 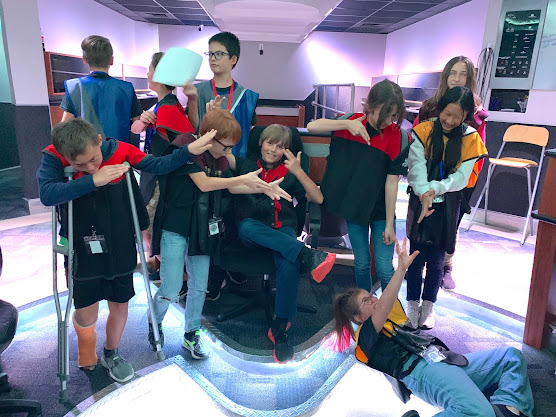 The 6th Grade Tiger Squadron's "Let have some fun" photo

It has been a busy week at Renaissance Academy's The Space Place.  Every afternoon The Space Place staff and volunteers greet a new Young Astronaut or Voyager Club squadron for their first meeting of the school year.  There are over 200 students in the after school club this year. They are divided into squadrons of 7 to 10 members.  Each grade level has a Monday Cobra, Tuesday Dragon, Wednesday Lion, Thursday Scorpion, and Friday Tiger squadron.

Take a moment to meet the squadrons that launched last week.  Some did better at others at getting the Starship Voyager launched from Outpost 14.  One team accidentally fired a missile at the Outpost causing serious damage to both Outpost 14 and their team score for the day.  Ouch! 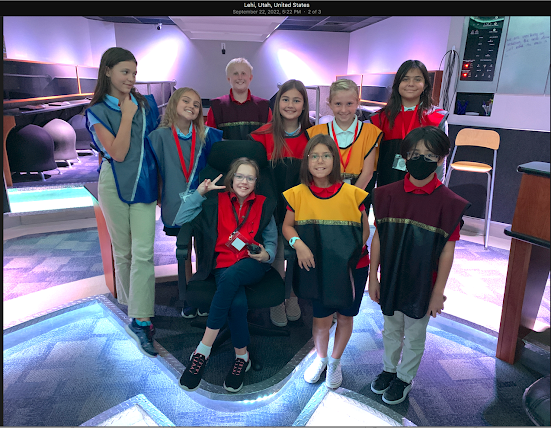 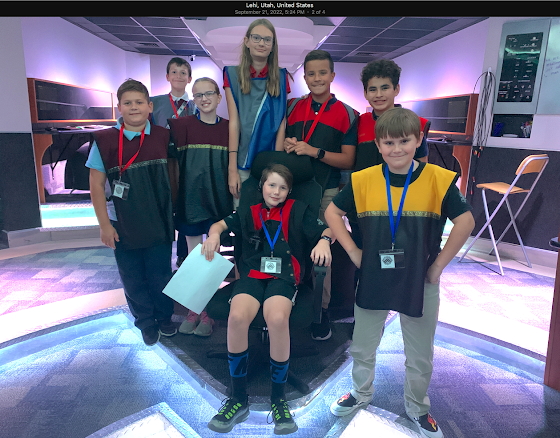 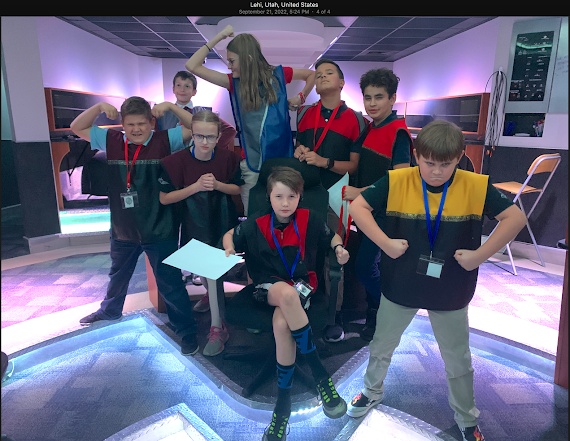 The 6th Grade Lion Squadron wanted a photo showing how tough they are
to intimidate the other teams.  Is it working? 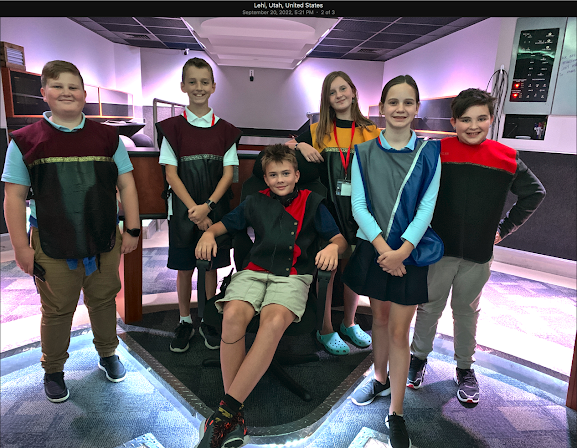 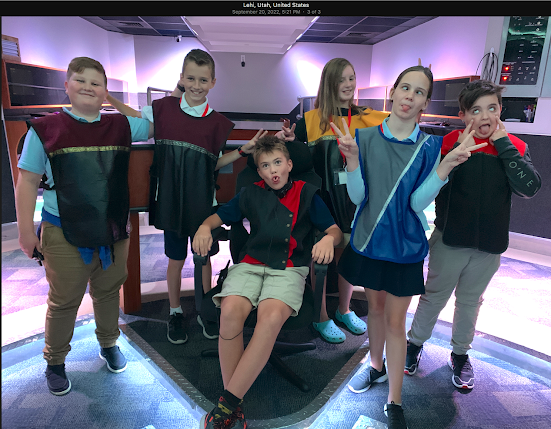 The 6th Grade Dragon Squadron decided to transition into a Piddlewee
pose to honor the great House Piddlewee of Uck in the Farpoint Universe. 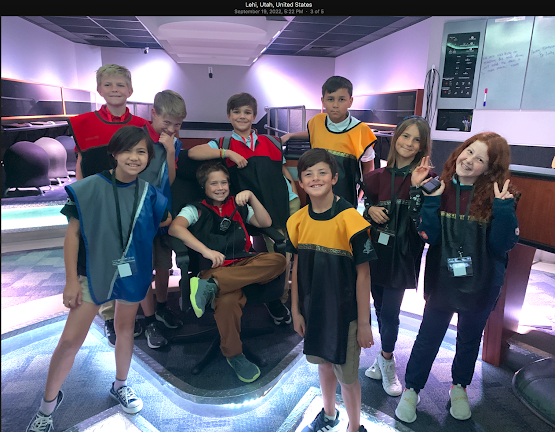 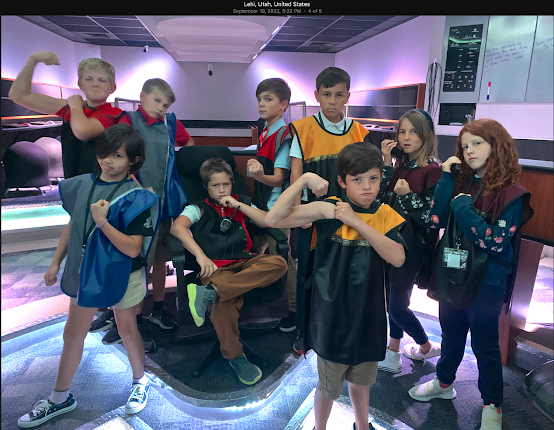 The 5th Grade Cobra Squadron's tough guy photo.  Their thinking is that once the other 5th grade squads see this photo they'll know right from the beginning which
5th grade squadron will take the Best Team of the Year Award.
News and Update from Utah Valley's Space EdVenture Centers
American Heritage School's Creativity Lab / Space Center

The Space Center at American Heritage School has the Galileo II, purchased from The Christa McAuliffe Space Center, nearly finished and ready for a test mission.  Alex DeBirk, the Center's Director, wrote:

Phase 2 of #ahscreativitylab includes a second simulator: the Old Bird, the Galileo from Yesterday's Christa McAuliffe Space Center. She's finally back to a single (mostly) piece after 2 long years in storage. And she's back on her own legs and rolling freely and easily. The students have been instrumental in putting her together. Excited to show how things progress this summer. 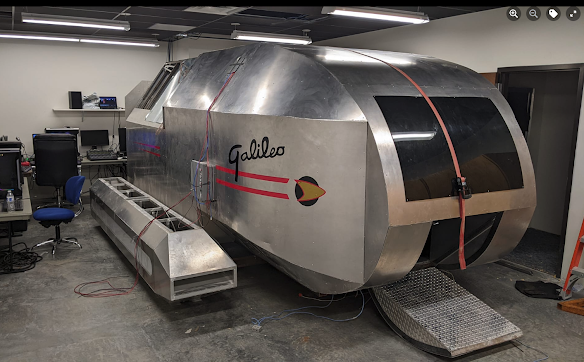 Engagements at the CMSC

James Porter wrote: Congratulations to our wonderful friends who decided to include us in the proposal process. Figured it was safe to share now that we got the official invite. We've had two proposals at the Space Center over the last couple months! Wishing both wonderful couples all the best. Guess we better dust off our fancy uniforms and see if we can still squeeze into them for the events. 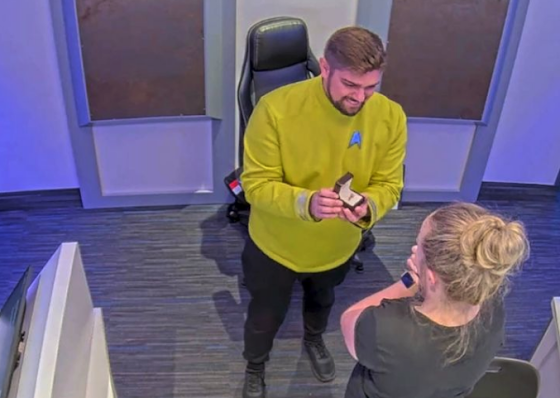 Night Out with the Stars at the CMSC

On September 3rd the Christa McAuliffe Space Center hosted a star party on Central Elementary School's playground in Pleasant Grove. The public was invited to come with their own telescopes or they could see the sights with the CMSC's telescope. 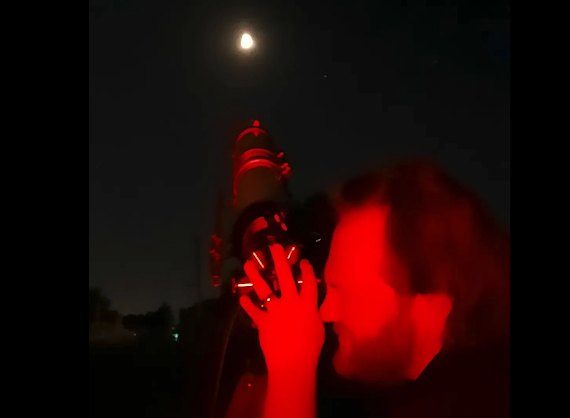 The Imaginarium Theater
The Best Videos from Around the World Edited for a Gentler Audience
Posted by Space Camp Utah at 11:23 AM No comments:

Hello to a New Class of Voyager Cadets and Young Astronauts at Renaissance Academy. Want to Hear Happy Birthday Sung in the Languages of the Galactic Diaspora? The Imaginarium Theater.

Monday was the launch of the 2022-2023 Voyager and Young Astronaut Clubs at The Space Place located at Renaissance Academy, a public charter school in Lehi, Utah.
Today's post introduces you to the squadrons who met this week. 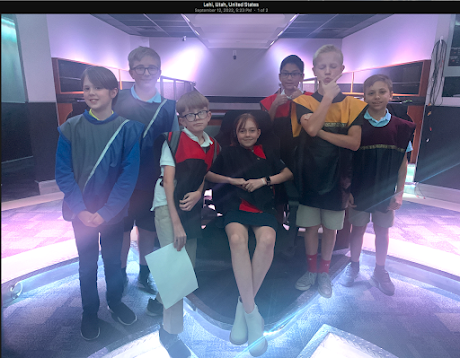 The 6th Grade Cobra Squadron.  2022-2023
Over 200 Renaissance Academy third through ninth grade students joined the after school program.  That is 25% of the school's 800 students.  The club's enrollment fee of $125.00 covers 8 months of meetings, missions in the Voyager Starship Simulator, and a club t-shirt.  Club members are referred to as cadets.  Cadets in grades 3 to 5 are in the Young Astronauts.  Cadets in grades 6 - 9 are in the Voyagers. 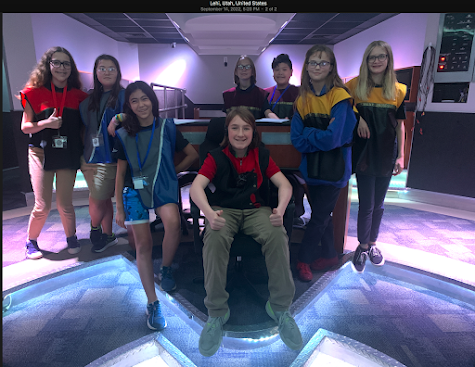 The Middle School Dragon Squadron
The cadets are placed in squadrons of 7 - 10 students.  The squadrons meets once a month on average. This year's curriculum includes astronomy, space history, current events in space, and of course the humanities included in the starship long duration mission (LDM). Each grade level has a different LDM.  The missions last 8 months. 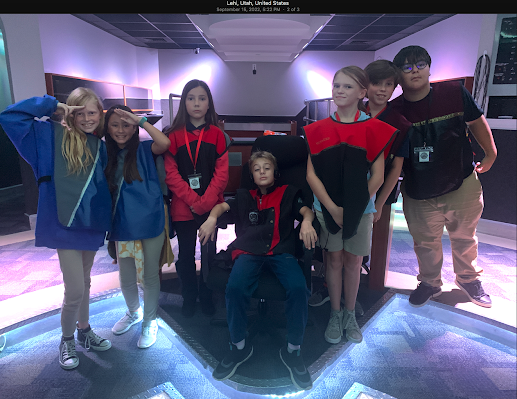 The Sixth Grade Scorpion Squadron
I direct the classroom portion of the meetings.  Bracken Funk is the simulations director.  Our great group of Renaissance Academy student volunteers help Bracken in the Voyager. 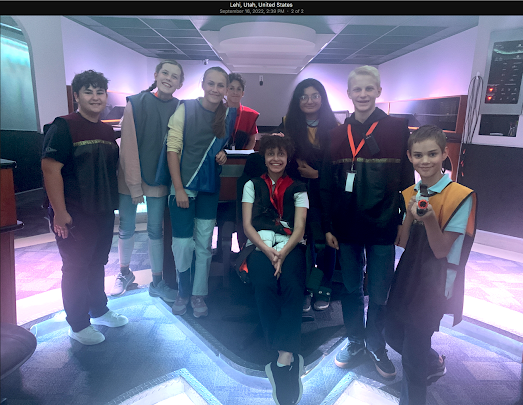 The Middle School Tiger Squadron
This week's launch scores are on the low side.  Only two squads succeeded in completing all launch tasks within the allocated time to receive full points.  The cadets are getting their space legs under them. They always improve over the year as they learn to work together as a team and communicate effectively.
Want to Hear Happy Birthday Sung in Alien Tongue? 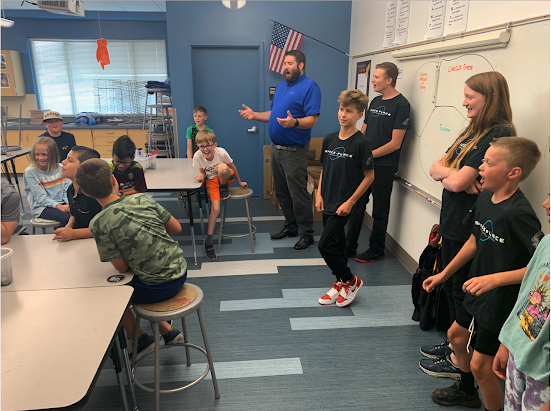 Mr. Funk Leads The Space Place's Staff and Volunteers in
Singing Happy Birthday in the languages of the Galactic Diaspora last Saturday
You're in for a real treat if you book your birthday party at The Space Place at Renaissance Academy. Mr. Funk started a tradition a few years ago where the birthday boy or girl is serenaded by the staff and volunteers.  They sing the usual "Happy Birthday to You" in the languages of the Galactic Diaspora.  The Galactic Diaspora is an element of the Farpoint Universe used at The Space Place, The Space Center at American Heritage School, and the Discovery Space Center at Telos Academy.  To the untrained ear, it all sounds like a bunch of gobbledegook, but quite hilarious for the party.
The Space Place offers a fantastic Google 5 Star birthday party experience.  Contact Mr. Funk for more information.
TheSpacePlace.org
The Imaginarium Theater
The Week's Best Videos From Around the World Edited for a Gentler Audience
Posted by Space Camp Utah at 9:07 AM No comments:

The Galileo II is Back and is Being Reassembled at American Heritage School's Starship Shipyards. The Galileos Over Time... The Imaginarium Theater.

I thought you might like to see these photos of the process of getting the Galileo together. Turns out when we put it together we thought all the pieces loaded from the back not from the front! So some of the pictures are us trying to put it together from the back, all of which we had to undo and redo properly from the front. It was quite a bit of tetrising to figure out how to get all of the pieces to the far side of the room so they could load front to back on the frame. But all is together now! 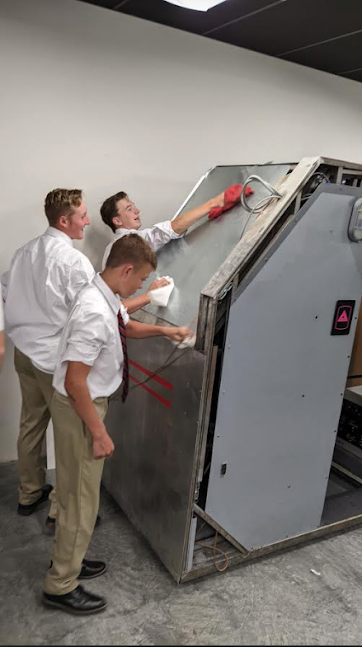 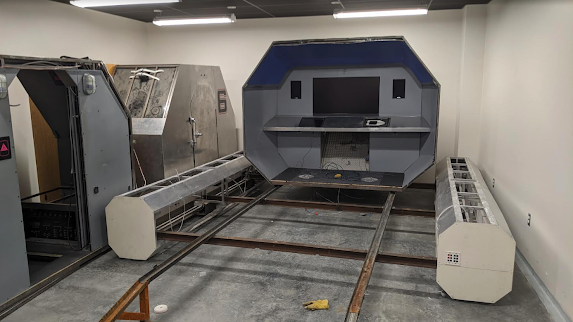 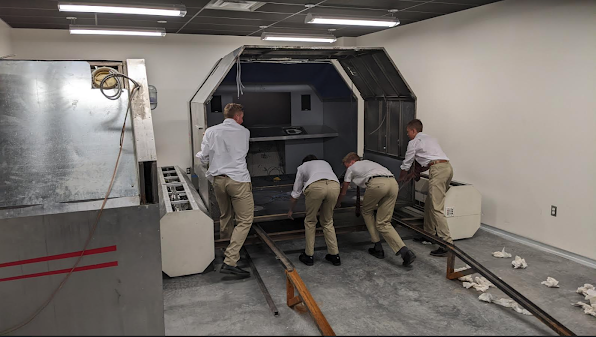 Getting it turned around 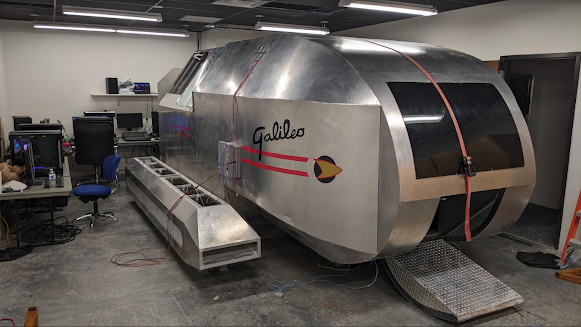 And there it, Nearly Assembled
The Galileo will fly again once the electronics are installed. It sits in a room next to the Starship Discovery at American Heritage School in American Fork, Utah.  Welcome back Galileo II.
The Three Galileo Starships Over the Years 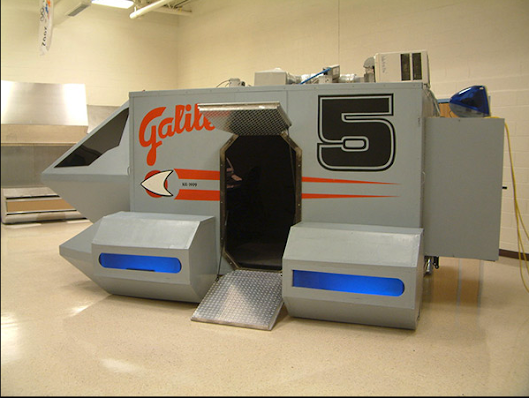 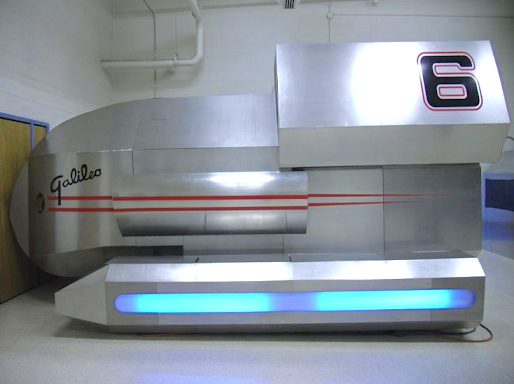 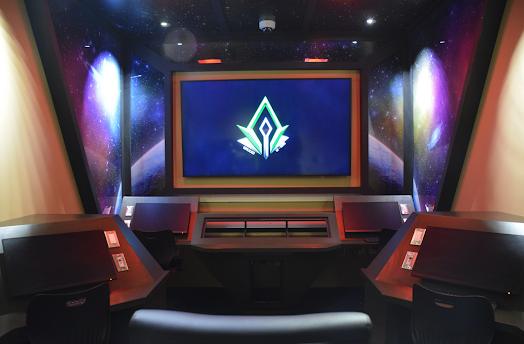 The New Galileo at the Christa McAuliffe Space Center
2021 - Present
Imaginarium Theater
The Best Videos From Around the World Edited for a Gentler Audience
Posted by Space Camp Utah at 3:59 PM No comments: