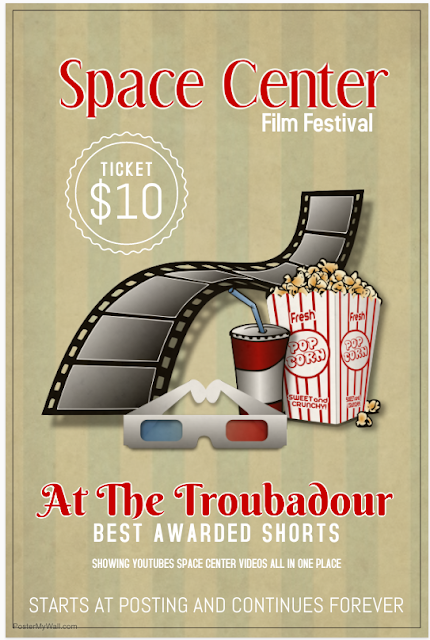 A hush fell over the standing room only crowd at the new downtown Troubadour Theater. The lights dimmed as two bright spots found their mark on Mr. Williamson.  Dressed in his rented tux, Mr. Williamson walked across the stage, stopping briefly to touch the red velvet curtains hiding the silver screen behind.  He nodded in approval. The downtown Troubadour was first class all the way.  No corner cut in the construction or its apparel. 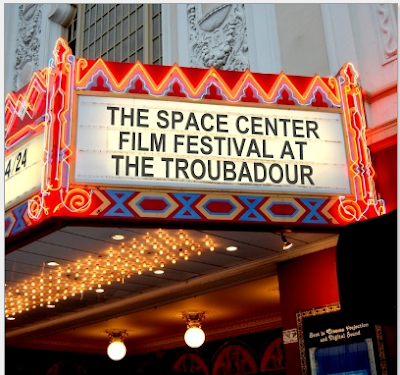 Finding the X marked at center stage, Mr. Williamson stopped and adjusted the oversized 1930's radio microphone level to his mouth.  He cleared his throat while taking a moment to wipe his forehead with his clean white handkerchief.
"Welcome to The Troubadour!" he bellowed. The audience responded with thunderous applause. The overly enthusiastic rose to their feet.  The former Space Center director waited for the audience to fully show their appreciation. He continued as the clapping abated. "Tonight we have the best Space Center videos gleaned from the YouTube depository for your enjoyment.  They span several years and cover many topics from advertisements for missions to videos made specifically for mission tactical screens. 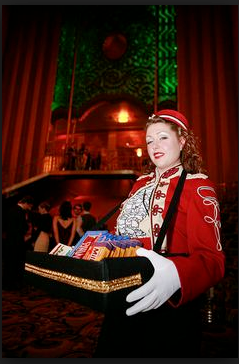 Sit back, relax, purchase some sweets, popcorn, or a cool soft drink from the lovely usherettes moving up and down the aisles. The Troubadour is here to serve you. Consider it your home away from home.  Now let's dim the house lights and drift away on the magic carpet embroidered with good times passed."

Lights bleed red, flickering with each torpedo impact. Music pounds, ushering adrenaline-fueled choices towards their hapless outcome. Will the starship Voyager and its youthful crew survive? Moments like these come often to the elementary school students hosted by Victor Williamson. As the man behind the scenes at the Christa McAuliffe Space Education Center, Victor has built five spaceship simulators to make learning memorable and push the frontier of education. Victor's work and vision as a public educator are a welcome presence in a country eager for changes in the way our kids are taught.


November 2000
A celebration video of the Space Center in its tenth year. It was recorded from a video cassette tape found in the Christa McAuliffe Space Education Center.


Dec 13, 2009
Megan and the staff performing the famous Summer Disco Pizza Dance one last time. Megan enters the MTC on Wednesday.  She and Taylor asked if they could dance it one last time for our overnight camp on December 12.  This was done just before the campers were asked to cast their votes.  The campers really got into it at the.  Watch it to the end.

Sep 3, 2007
This is a Distress Call from the USS Kepler for a mission called: Bug Hunt. It's a mission simulation at the Christa McAuliffe Space Education Center in Pleasant Grove Utah.

Aug 14, 2009
While showing off the new Galileo at the Utah County Fair a huge rain storm of biblical proportions hit us. Screams of children heard everywhere, we scrambled for the ship and shut the door! (Kyle and Stacy)

Aug 13, 2009
Kyle Herring at the County Fair in Spanish Fork, sleeping in our new Galileo simulator.

Sept. 2010
A tour of the Space Center given to UEN Network


Feb 5, 2012
Video segment taken from a particularly intense part of the Greenpeace Mission aboard the USS Voyager. For my birthday party, 11 of us drove down to the The Christa McAuliffe Space Education Center in Pleasant Grove, UT. It was designed for youngsters but we loved it!

May 26, 2016
Darmok Trials are a unique camp offered only at the Christa McAuliffe Space Education Center.

The Tal' Shair has just found some new information on one of our new weapons. What does this mean for the federation? Come this summer for 'The Razor Plan' and find out.

February 2012
Slide Show of Good Times at the Space Center

February 2013
The staff are working to get the ship's ready for our grand reopening.
A tour of the closed USS Voyager starting at the 4:03 minute mark  :(

November 2015
Anna Edmundson recreated (and embellished a bit) the Christa McAuliffe Space Education Center in Minecraft. She wanted to make it seem like a futuristic spaceport with real ships. She also wanted to include the new Odyssey as well as the old so she just put it right on top, since the remodel took out the Voyager and the Odyssey.

The Impact of an InfinD Lab on a School in the Davis District.

A Fifth Grade Visits the Space Center for a Field Trip. A Student Made Slide Show
Spring 2013

A Tribute Honoring Mrs. Lorraine Houston for 25 Years Service to the Space Center
May 24,2018


A Video Introducing the Space Center's New Logo
May 24,2018

Chloe Johnson takes us down to the Christa McAuliffe Space Education Center to see why this program has been a school favorite for nearly 30 years!


A Short History of the Christa McAuliffe Space Education Center


The Magellan Staff Introduce You to the Simulators at the Christa McAuliffe Space Center
August 27, 2013