The Starship Simulator Program in Venezuela to be Highlighted in Educational Journal. Renaissance Space Academy and its Awesome Summer Space Camps in Pictures. Imaginarium Theater.

Experiential Education Starship Simulators to be Highlighted in October's Edition of The International Educator.

Todd Lichtenwalter is one of the few, the proud, the chosen in the educational community. He's the teacher everyone wants because of his enthusiasm and limitless imagination.  His students at the Colegio Internacional de Carabobo in Valencia, Venezuela have the IKS Artemis Charger Dream Flight Adventures simulator thanks to him; and what a ship it is - the only international Voyager inspired simulator flying the Space EdVentures' flag.

The IKS Artemis Charger is in the school's Education Immersion Center, I'm sure Todd's home away from home if he is like any of the rest of us who operate these brick and mortar starship simulators.
Recently Todd sent an email saying a paper he wrote titled To Infinity and Beyond: An Infinity Learning Space in Valencia, Venezuela was accepted to be published in October's online edition of The International Educator.  The entire article will be available at tieonline.com in October.  In the article, Todd was kind to put in this paragraph giving a shout out to the movement's history.


Over the next several posts I'll highlight sections of Todd's article (realizing our busy readers may not have the time or bandwidth to sit down and read the entire article, after all it is the start of another school year).  You'll find it insightful in how he envisions a fully functioning simulator based immersion program.
Learn more about Todd by visiting his website:  toddlichtenwalter.com.  You may reach Todd directly at mrl@mrlscience.com.

Renaissance Space Academy and its Great Summer Space Camps. All Good Things Must Come to an End (Until Next Summer of Course)

With the end of summer vacation comes the end of Renaissance Space Academy's summer space camps.  Mr. Funk and staff did a fantastic job offering one of Utah's best kid's camps. And that's not just us bragging - you should read the reviews!
The missions were intense and thought provoking. Mr. Robinson and Mr. Vidinha's classes were engaging and inspiring, and the Academy's volunteers superb in all areas.  It was the dream team imagineering two outstanding simulators - the Voyager and the Nighthawk.
The Space Academy is in full school year mode.  Visit the website for information on the Academy's two space clubs: The Young Astronauts for grades 4-5 and the Voyagers for grades 6-8. Expect to see a few after school computer coding classes using the GoogleCS curriculum.  And of course everyone is welcome to come to the Academy for private missions in either the Voyager or Nighthawk simulators.  Let me be more specific about the private missions.  You need to be between the ages of 9 and 109 to participate (yes we can accomodate grandma's wheelchair).
Visit SpaceCampUtah.org for more information or contact me at Director@SpaceCampUtah.org or Bracken Funk at Bracken@SpaceCampUtah.org for more information.


Where did the summer go?  I started my 37th year in education last Tuesday;  30 years at Central Elementary School and the Space Center and now starting my 7th year at Renaissance Academy.
I will have met my goal at the end of this school year.  I taught 6th grade full time at Central from 1983-1990. I opened the Space Center in 1990 while I was teaching 6th.  From 1990-2013 I administered the Space Center AND taught at least one period of math (before the field trips arrived). The first three years of the Space Center I taught that one period of math at the start of the day and a 6th grade history class at the end of the day. Talk about burning the candle from both ends!
I retired from the Alpine School District in 2013. One of my goals for retirement was to go back to full time teaching.  I wanted to teach 6th grade for another 7 years at least so I'd have 7 at the start and 7 at the end.  This will be the 7th.  Check that off the bucket list.  What happens next?  Let me get that bucket list out.  Hmmmmmm.
Imaginarium Theater
The Best Videoettes From Around the World Edited for a Gentler Audience

Posted by Space Camp Utah at 4:11 PM No comments: 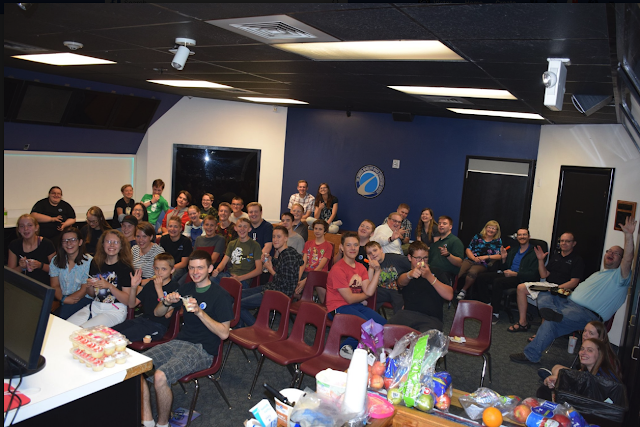 The Christa McAuliffe Space Center held its last summer Honor's Night in the current building last Thursday. Next year's summer's end Honor's Night will be in the new Space Center and Central School.  Unfortunately I was unable to attend so must rely on what little I can scour from the CMSC Facebook site. 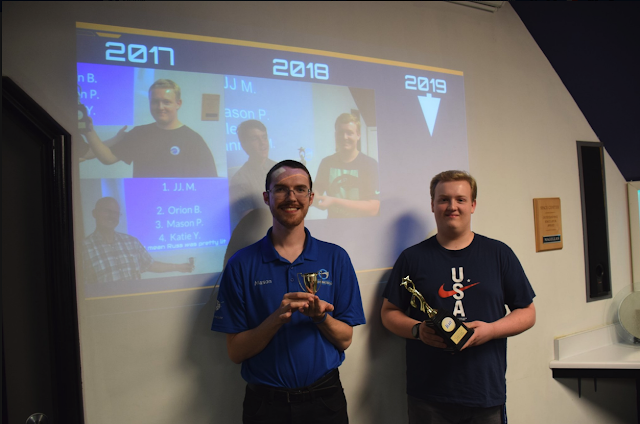 This is Mason and JJ M.  If my memory is correct I'm guessing that JJ M won overall Lord of the Votes for the summer season.  The little trophy Mason holds was given to the person with the fewest votes, at least that is what we used it for back in the day.  Or it could mean that Mason took second place. 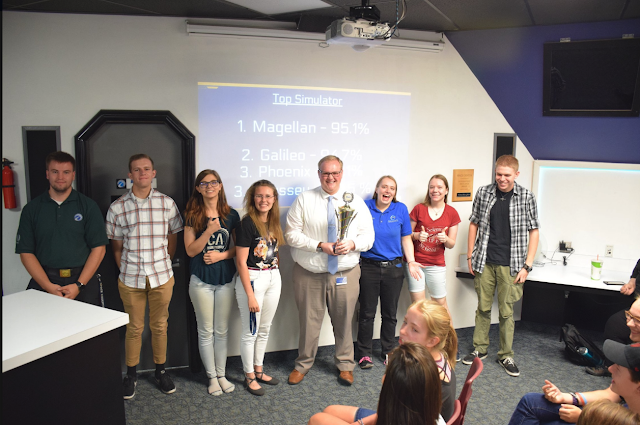 Congratulations to the Magellan staff for taking top simulator for 2019 summer camp season with an impressive 95.1% overall satisfaction score.  What made this even more special was the fact that this was Conner Larsen's last summer at the CMSC.  Conner is leaving Utah for North Carolina and school.  Conner was blessed to have the staff he did. All of them are gifted in the art of imagineering and all hard workers. 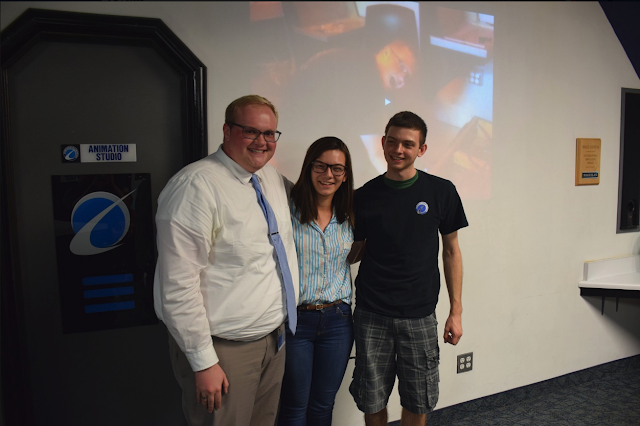 And sadly, the Christa McAuliffe Space Center says farewell to three of their best.  Conner Larsen, Lindsey Hatch, and Orion Bowers.  All three are retiring from active space service. Conner to school in North Carolina, Lindsey and Orion will be leaving for LDS missions.  Their shoes will be tough to fill.  They've been with us since they were younglings and have grown strong with the Force. 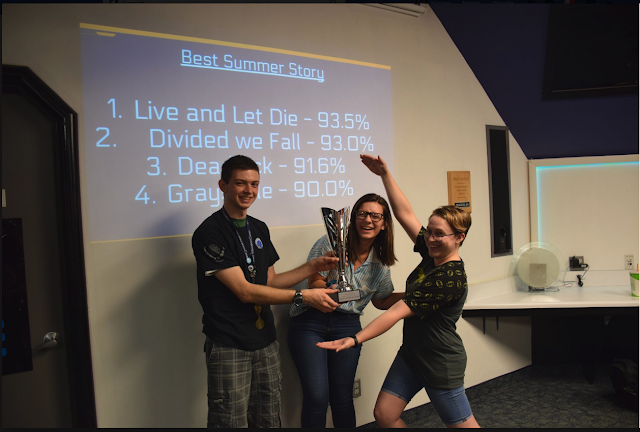 And of course the best summer story, by just 1/2 a percent, was Live and Let Die!  The Magellan was beat out by the Galileo! 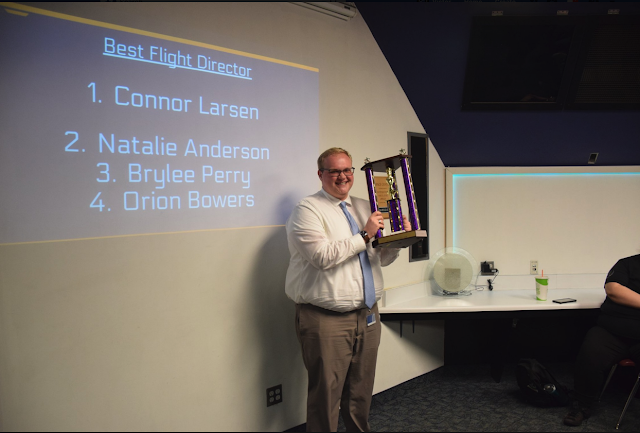 Again Conner comes through at the end to teach everyone that old dogs can learn new tricks.  Conner Larsen takes the "Best Flight Director" trophy for the summer! 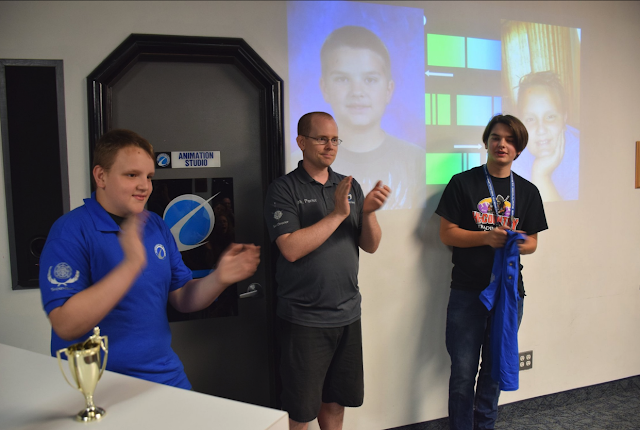 Mr. Porter was pleased to award Magellan Supervisor Blues to two young men.  Tyler is on the right.  I'll get the name of the other young man and post it. 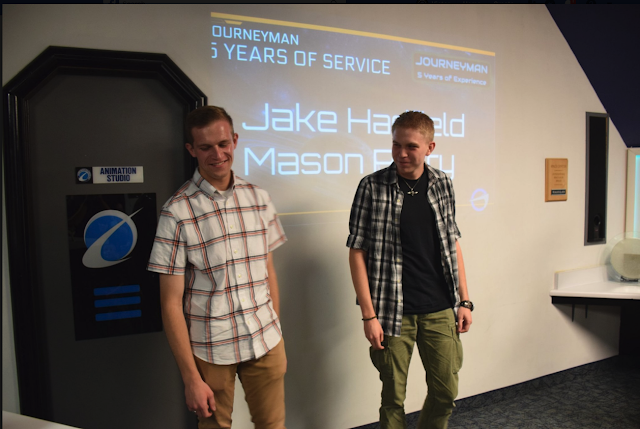 And finally Jake Hadfield and Mason Perry were both inducted into the Journeyman Guild for serving over 5 years at the CMSC.

Posted by Space Camp Utah at 1:40 PM No comments:

A Flight Director Begins and Another Sees an End, All on One Saturday. Space Center and Central Elementary Construction Update. Simulator Scores for the CMSC's Last Extended Camp. James Porter on the Radio. Imaginarium Theater

A Flight Director Begins and Another Sees an End, All on One Saturday

Shall we start with a celebration before we get to the news of the soon to be sadly departed?  The Space EdVentures community celebrates Mason Perry, a new flight director at the Christa McAuliffe Space Center.

Mason's time at the CMSC started when he was junior high school. He was one of my Farpoint Cadets for our Long Duration Mission Program. You see him in the photo on the left with his squadron on a cold Saturday morning.  He volunteered at the CMSC around the same time learning the ropes as he progressed. 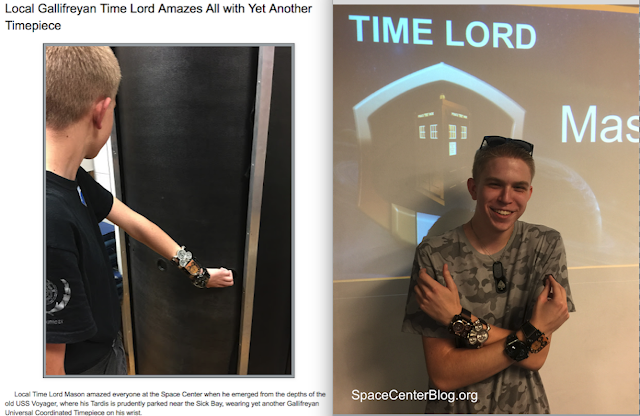 In August 2018 Mason graduated to "Time Lord" status and was awarded his Supervisor Blues.


Mason chose the Phoenix as his simulator of choice for flight director training. Jordan Smith was his Set Director and trainer.
Just a few weeks ago Mason passed his last Phoenix training mission and was awarded his Flight Director Blues. 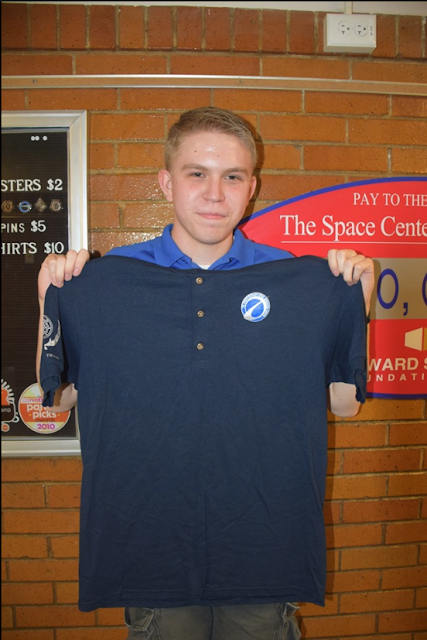 Yesterday Mason took that last step and ran his first solo paid Phoenix private mission. I stopped by the CMSC to celebrate his accomplishment and found him briefing his crew in the Kiva. 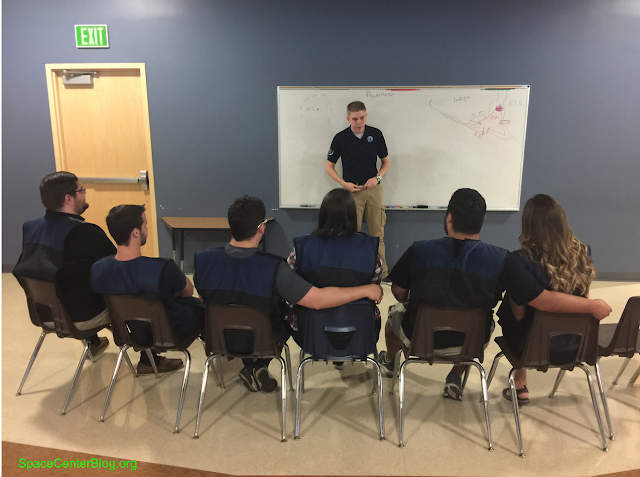 It would be an adult crew!  No worries, Mason handled it like a young pro.  When it got the actual mission, Mason started sweating a bit.  He didn't have a second chair.  Yes, the Phoenix can be flown with one staff, but with an adult crew you really need a good second chair.

I was tempted to offer my services as his second chair but knew I'd make matters worse.  Yes, the Phoenix was the creation of Kyle Herring and myself but that doesn't mean I would have the slightest clue how to operate it today.  "The Magellan has a full staff," I said to Mason. "Let me go see if I can't wrangle someone to come in to give you a hand."
Shifting staff from ship to ship was something I had to do on a regular basis during my time at the CMSC helm. I was confident someone would be willing to help.
Tyler was the man of the hour!  Connor asked if he'd be ok to switch. He didn't hesitate even though he wanted to work the Magellan 5 hour.  He saw the need and took care of it. 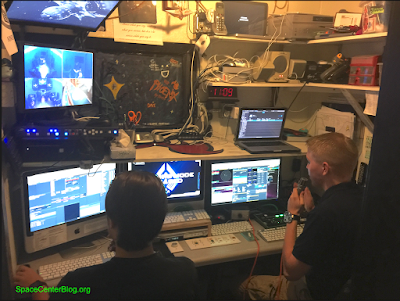 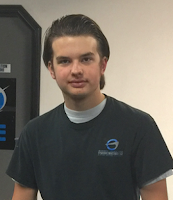 Tyler, all around great guy.

Mason had his staff and was ready to deliver a quality mission. Congratulations Mason on your first successful private mission as a new flight director.

Now as I stated at the start of this post, Saturday was also the day for an end.  Saturday was Connor Larsen's last private missions as a CMSC staff member.  I won't go into details about his leaving because he still has the Center's Leadership Camp to run this week so look for a Connor celebration in next week's Troubadour.  Today then, we celebrate Connor's last Saturday at the Christa McAuliffe Space Center.

A couple times a week I drive by my old stomping grounds to track the construction of the new Central Elementary School and Christa McAuliffe Space Center. Take a look and see the progress. They say construction is ahead of schedule for an April 2020 grand opening! 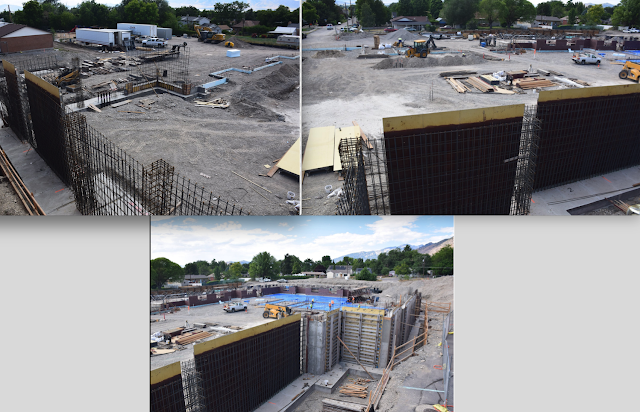 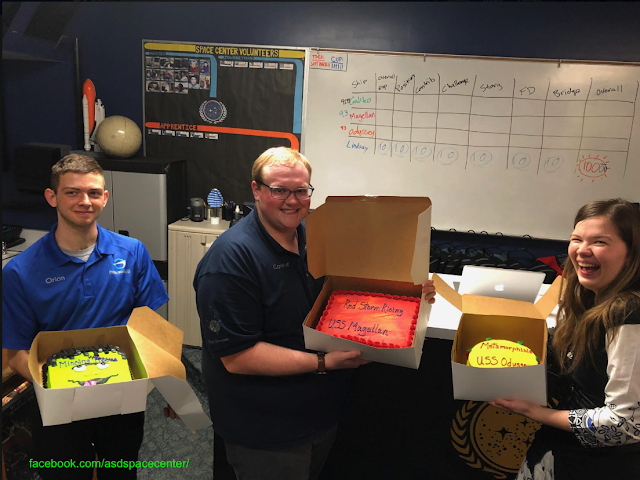 Last week our staff celebrated the last Extended Camp of the summer with some specialty cakes representing the three summer stories. You can see by the camper survey scores that these are some of the favorite camps to attend.
The hectic events of these camps, especially this last one, are far too many to list. To give you an idea of the dedication and talents involved in telling a 10.5 hour mission it involves: 5 staff, 16 volunteer actors and scene specialists, dozens and dozens of cookies, soda, endless costume changes, a few meltdowns followed by encouragement from friends, and of course a bit of Space Center Magic. 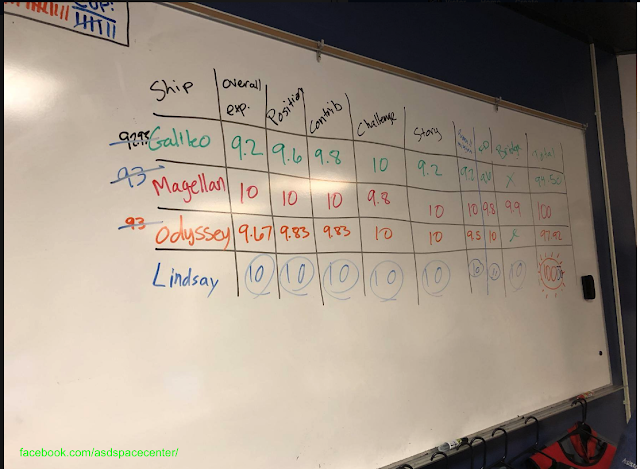 Space Center Director James Porter had a chance to speak with BYU Radio host Rachel Wadham about the Space Center experience and how the planetarium will be such an important educational tool as the CMSC creates wonderment with Utah's students.


Looking up at the sky on a clear night can be a magnificent experience. There are millions of unknown stars and planets that are just waiting to be explored. Many children are excited to make those discoveries, but may not have access to resources that help them learn deeply about space. Today we have James Porter from the Christa McAuliffe space center in the studio, whose on a mission to change that.

You can listen to the interview using the link.  Link to the radio interview.

Posted by Space Camp Utah at 1:26 PM No comments: