Enjoy This Week's Imaginarium Theater, Only on The Troubadour!

Posted by Space Camp Utah at 4:01 PM No comments:

The cycle of life continues at the Christa McAuliffe Space Center. Old blood retires to move on to other opportunities and new blood walks through the glass doors seeking new opportunities.  I've been fortunate to see this revolving door of good folks in and good folks out for the last 31 years at both the CMSC and The Space Place at Renaissance Academy.
The Troubadour Blog has done a good job documenting the cycle in and out by both celebrating the new arrivals and their promotions and seeing our retirees out with wishes of long life and prosperity.
Today we celebrate advances made by a few of the CMSC's up and coming stars. 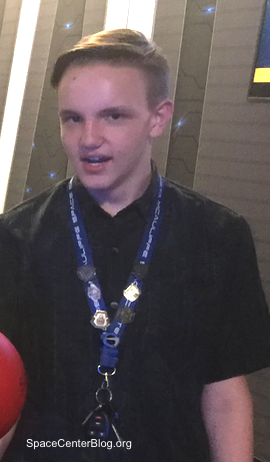 Meet Wes Kinsey.  Wes is 16 years old and a student at Timp. High School.  He received his Magellan Flight Director wings on October 9.  While Connor Larsen acts as Magellan Set Director from his organ seat on the east coast, Wes and his friend Tyler Gotcher (read about Tyler's promotion to flight director) do the day to day flying. 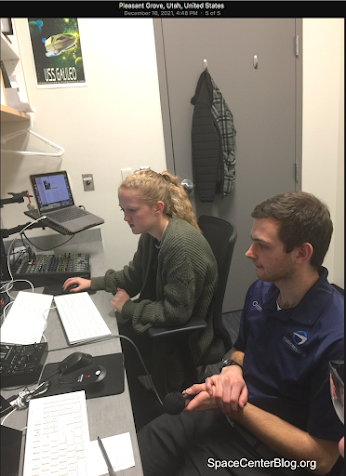 Meet Hannah.  Hannah is 17 and a student at Westlake High School.  Brylee Perry (Galileo Set Director) selected Hannah to began training as a Galileo Flight Director.  The Galileo currently has two flight directors; Brylee and Orion.  I found Hannah training with Orion Bowers last Saturday.  She directed a private mission with Orion beside her to ensure the crew had a great time. 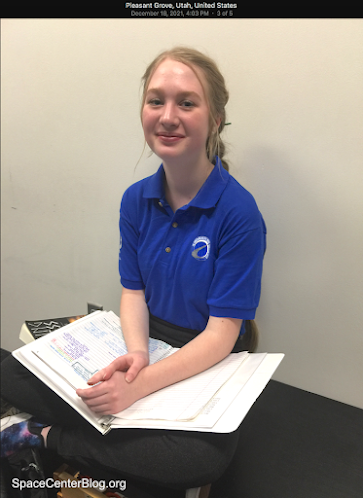 Meet Cecily.  Cecily is 16 years old and a student at UCAS in Orem.  Cecily was promoted to Blue Shirt status and hired as a Magellan Supervisor.  Her first day as a paid Magellan supervisor was yesterday.  Cecily started volunteering at the Space Center on December 17, 2017.  Tabitha Ricks, Odyssey Set Director, has her eyes on Cecily as well.  Cecily has been approved to start training as an Odyssey Flight Director. 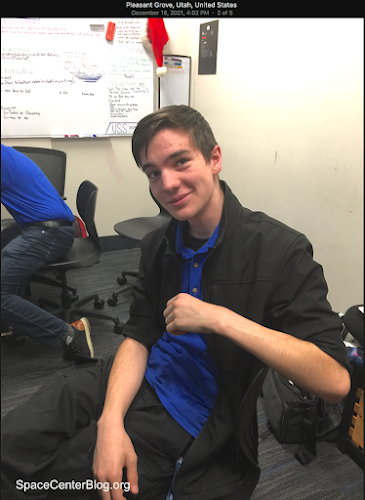 Meet Hayden.  Hayden is 17 year old and a Magellan Supervisor.  Jordan Smith recently nabbed Hayden to start training as a Phoenix Flight Director.  He will train under both Jordan and Mason Perry.  Hayden is also a gifted tactical card maker.
The Cassini Has a New Fire Suppression Panel and A New Flight Director Trainee. 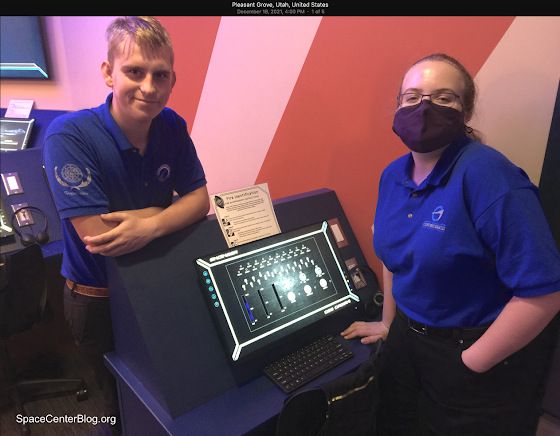 The Christa McAuliffe Space Center's talented teenagers are at it again in the Imagineering Lab.  Above you see Hyrum and Ellie, two of the Cassini's supervisors, giving me a demonstration of Hyrum's newest Thorium control panel - Fire Suppression.  The virtual panel is integrated into the ship's engineering station.   Hyrum did a fantastic job programming the panel.  It will add a whole new sense of purpose to the station.
Hyrum is also training to become a new Cassini Flight Director.  He sure knows his stuff, I can testify to that. He sure saved my bacon when I flew a recent Cassini private mission.  I know my stories, but I can be all thumbs sometimes when it comes to the mechanics of running the Cassini's flight station.
That is the magic of the Space Center.  The staff and volunteers see a need and go to work to make it so.  Great people  - and so say we all.
Imaginarium Theater
The Best Videos From Around the World Edited for a Gentler Audience
Posted by Space Camp Utah at 1:57 PM No comments:

Introducing the New Logo and Updated Simulator Photos of the Jumpship Discovery at American Heritage School. Meet More of My Young Astronauts and Voyagers at Renaissance Academy. Winter is Here. The Imaginarium Theater

The New Logo is Released for the Farpoint Jumpship Discovery at American Heritage School in American Fork. 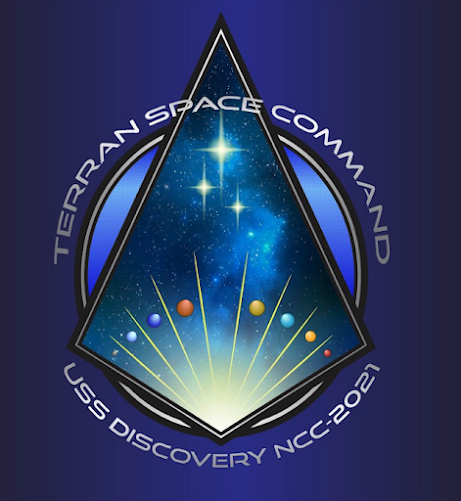 Alex Debirk and team are busily installing the furniture, lights, and other fixtures into the school's new Jumpship Discovery.  When in launches in January, the Discovery will join the other Farpoint fleet of jumpships: Voyager and Titan located at The Space Place at Renaissance Academy, the Hyperion at Telos Academy, and the Galileo also at American Heritage. 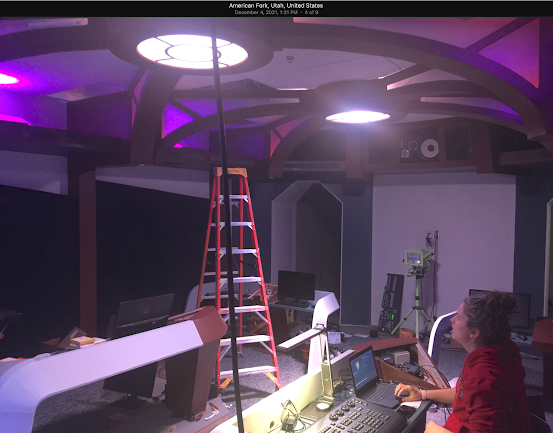 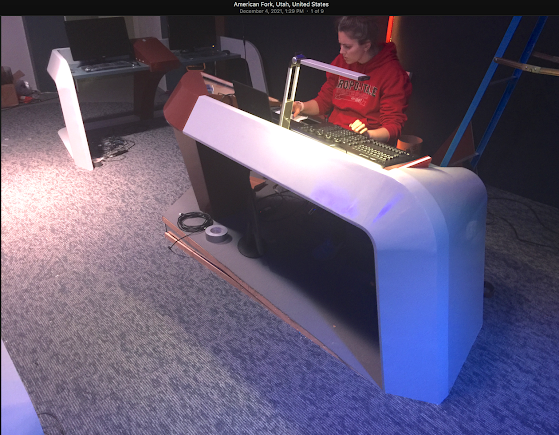 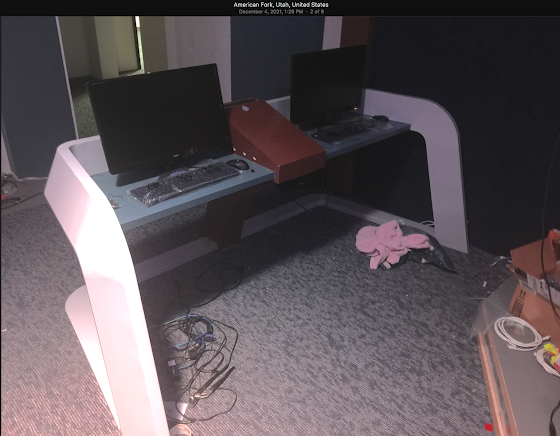 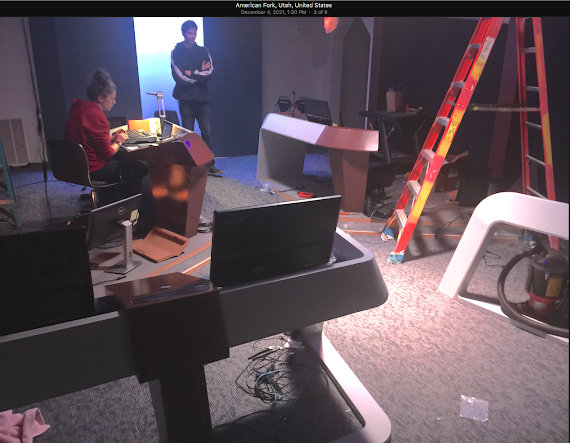 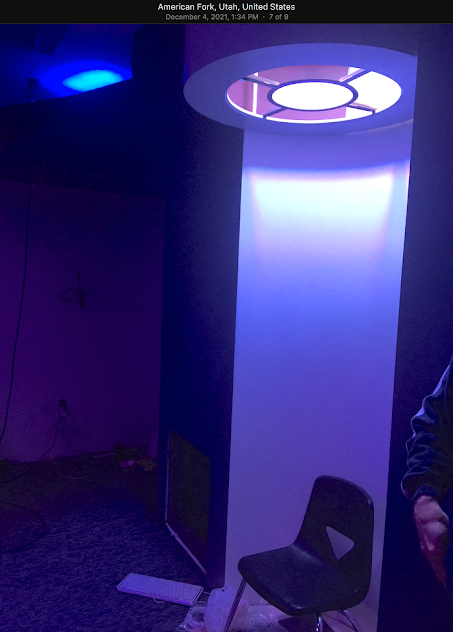 The new Uniforms for the American Heritage Space Center are Ready for Launch Day. 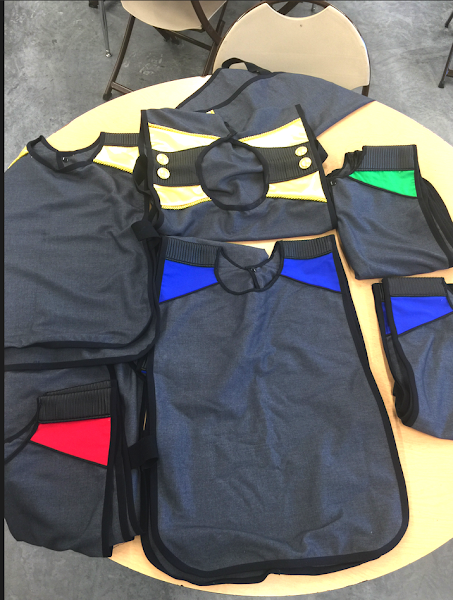 I'd like you to meet a few more of our Young Astronaut and Voyager Club Squadrons at Renaissance Academy's The Space Place.  These are a few of the squadrons that met this week.

We're in our second and third round of meetings. In their 3rd round meeting, cadets spend one hour voyaging the depths of  space on their 8 month mission, afterwards Major Vidinah (RA's middle school science teacher) from Starfleet Command puts them through 30 minutes of team building exercises.  Astronomy and Space Science lessons from Admiral Williamson (yours truly) finishes their 2 hour meeting. 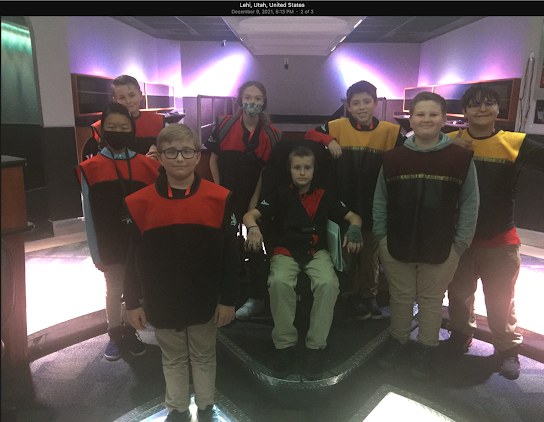 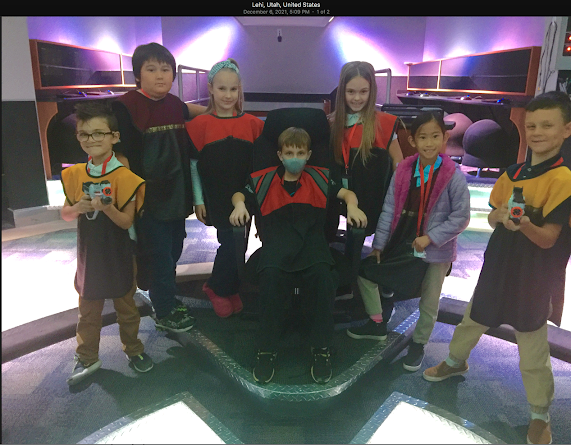 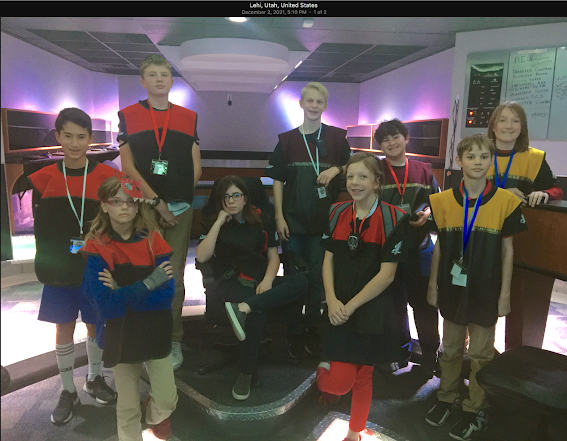 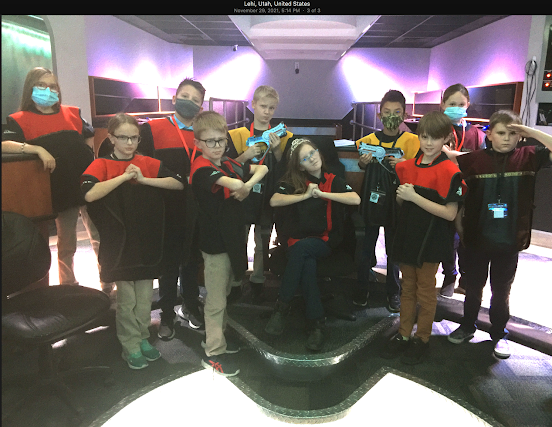 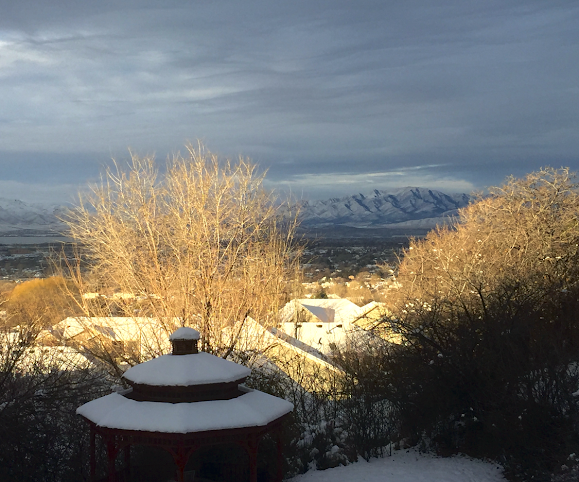 Winter is here in northern Utah.  This is Utah Valley as seen from The Fortress of Solitude (my home in Pleasant Grove) just as the sun peeked over Mt. Timpanogos Sunday morning.
Imaginarium Theater
The Best Videos From Around the World Edited for a Gentler Audience
Posted by Space Camp Utah at 1:30 PM No comments:

Starbase Williamson, the New Name for the Flight Deck at the Christa McAuliffe Space Center. I Like the Name - It Seems So Familiar to Me :) The Imaginarium Theater.

It's all happening at Starbase Williamson.  Six of the greatest ships in the fleet launch from there:  The Magellan, Cassini, Phoenix, Odyssey, Falcon, and Galileo.  The food in the Staff Room is worthy of extending your stay between postings and launchings.  The restrooms are the cleanest in the quadrant. The Promenade is unique in design complete with liquid oozing tiles and multicolored lightning effects - all installed to add to the visual delight of our Starfleet officers as they traverse from docking port to docking port.  And virtually anyone who is anyone currently walks or has walked the decks. 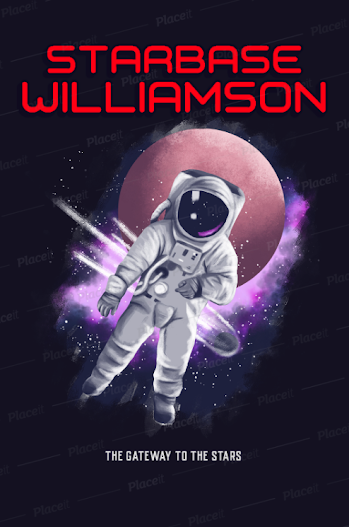 On a more personal note, I'm pleased and honored to have my name on the part of the Christa McAuliffe Space Center where the magic of imagination comes alive every day for scores of students, teachers, and our patrons who visit us for private parties.  The wonderful logo making the W in Williamson, along with the entire sign itself, was designed by one of the Space Center's own - Mason Perry.  It took several iterations and back and forth emails between Mason, myself, and James Porter before we settled on the sign you see. 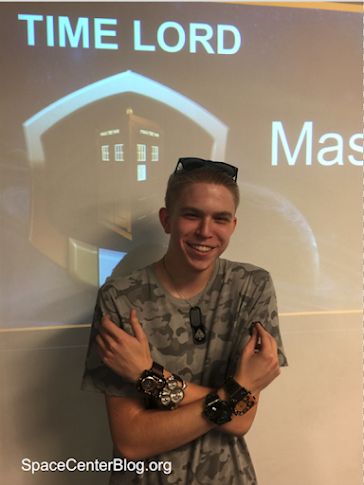 The sign has a few "Easter Eggs" only a long time Space Center volunteer and or staff member may know.  You'll notice an "MD" a "DW" an "A.B.S." and a "LH" making parts of the Stabase's locations.  Think for a minute and perhaps the meaning behind the lettering will strike a cord.
If you haven't been to the new Christa McAuliffe Space Center it is time you did.  Come see a star show in the wonderful, state of the art planetarium.  Then descend down the stairs into Starbase Williamson to see the new starship simulators.  If you really want to relive your childhood and teen years, book a private mission.  I'm partial to the Cassini because that's the ship I fly on Saturdays. Jon Parker is the Cassini Set Director. He is bringing back many of the Starship Voyager's old missions from the old Space Center.  The past and the future blend together perfectly at the new Space Center.
Ad Astra!
Victor
Imaginarium Theater
The Best Videos From Around the World Edited for a Gentler Audience.
Posted by Space Camp Utah at 2:12 PM No comments: