The Farpoint Jumpship Discovery Launches at American Heritage School in American Fork. What a Great Addition to the School's Curriculum. See the First Students to Fly and the Ship's Cool New Equipment 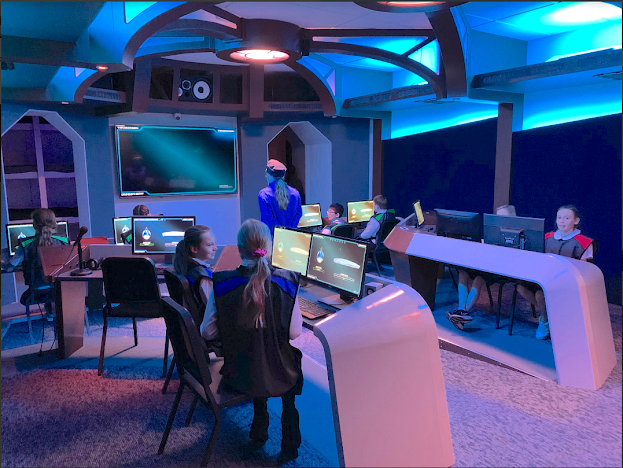 The Farpoint Jumpship Discovery launched and completed its space trials during the first week of January.  The Discovery is the American Heritage Space Center's flagship at their American Fork campus.  Alex DeBirk, a long time volunteer and staff member of the Christa McAuliffe Space Center and the Starship Voyager at Renaissance Academy, is the director.  He has been working late into the night and weekends for the past few months in preparation for the launch.  And while the Discovery isn't completely finish (no simulator ever is no matter how long it has been open) it was certified space worthy.  The following are photos of the jumpship's first crews. 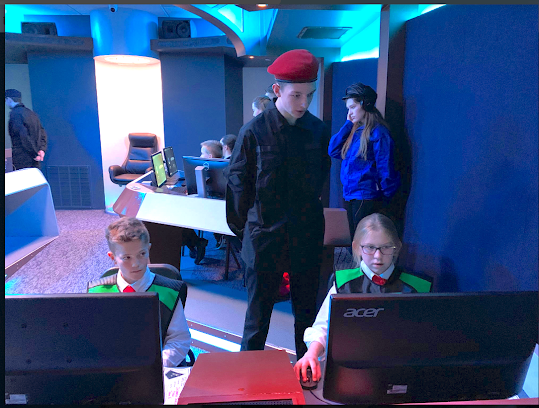 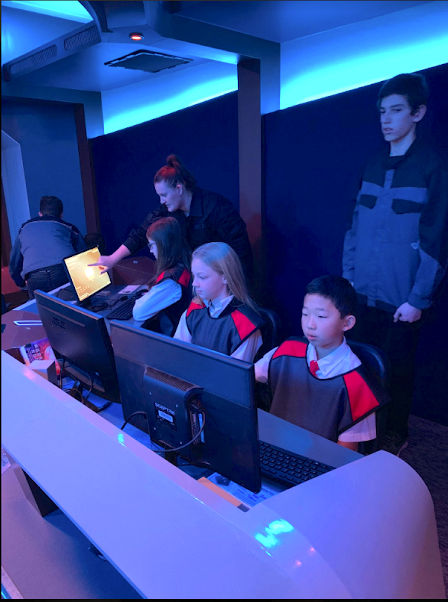 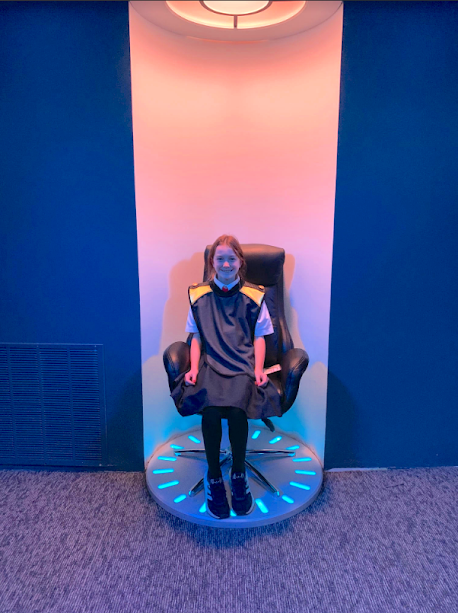 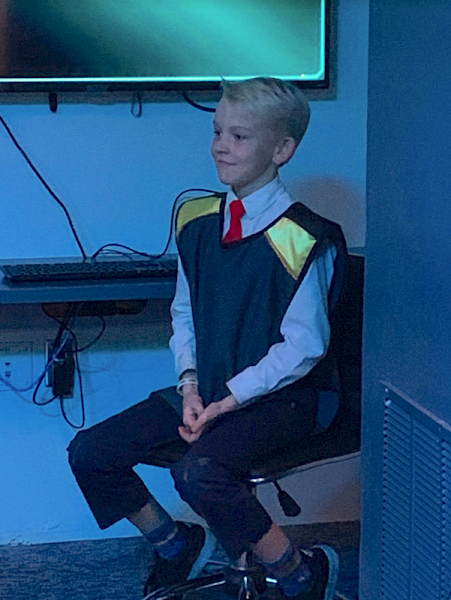 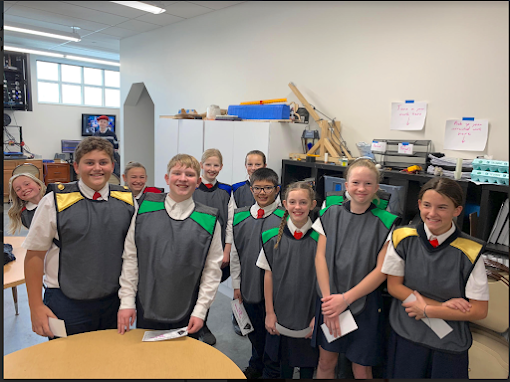 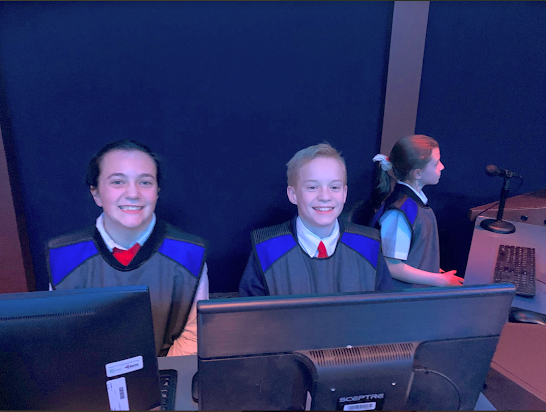 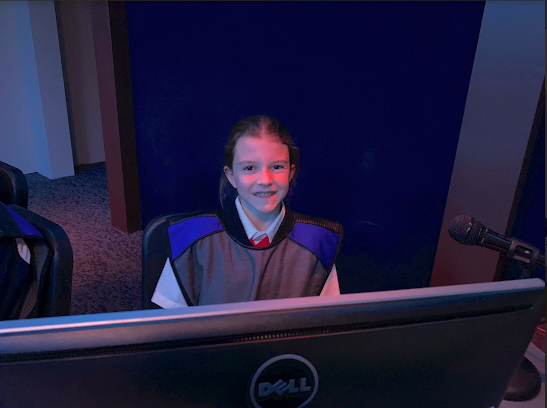 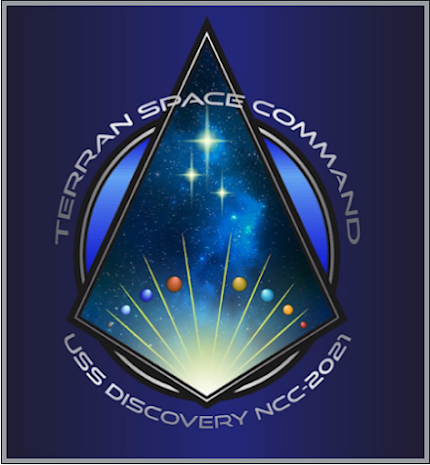 The Discovery's Warp Core
The Discovery has a small sick bay just off to the left of the Bridge.  Attached to the sick bay is a small warp core access room called "Bridge Engineering".  The jaw dropping prop in the room is the warp core engineered by Alex DeBirk.  The warp core has diffused led lights capable of doing patterns. The software to create the pulsing pattern was written by one of the school's parents. 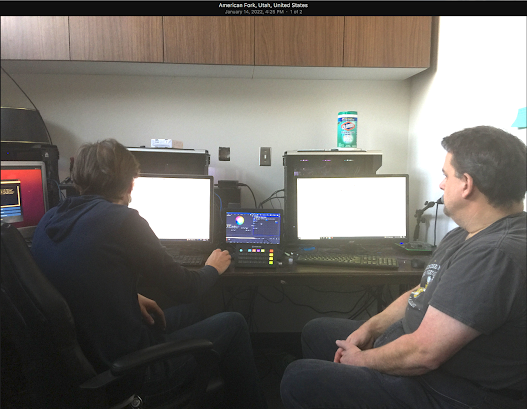 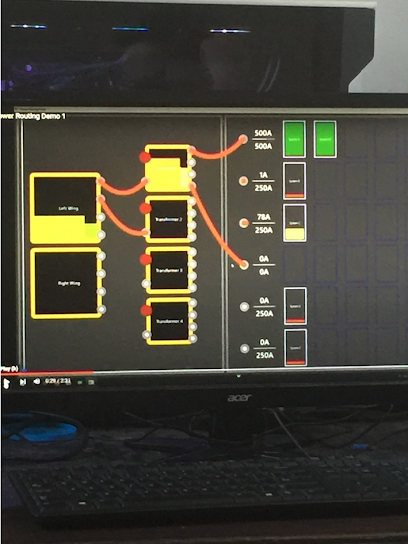 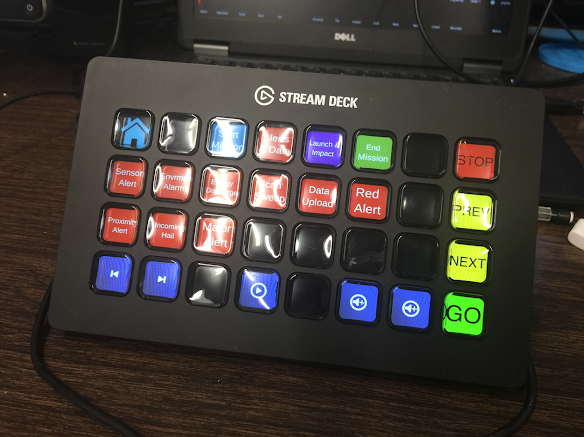 The Everything Box in the Discovery's Control Room. It does everything from
control the lights to play sound effects to run video plus more. It is amazing and each button is a monitor so you can change the name of the button using software. 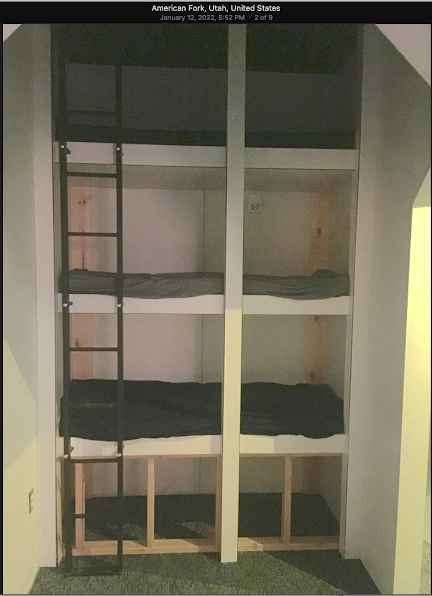 The Discovery has a small sick bay off to the left of the bridge.  The sick bay took an idea from the original Starship Voyager at the CMSC and has a three level bunk bed.  The area under the bottom bunk is a crawl space with a secret access hatch to the hallway separating the Discovery from the Galileo.  The sick bay is lined in FRP panelling - a tribute to the original Phoenix. 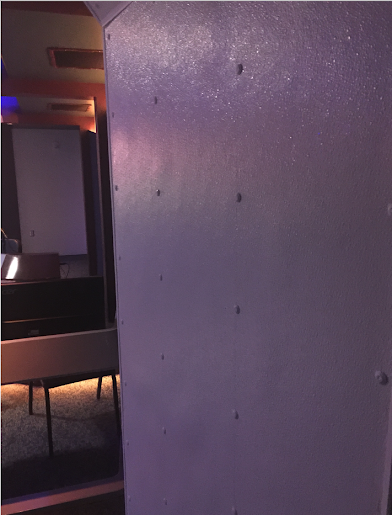 The FRP panelling
I stopped by to offer Alex some help organizing the school's Young Astronaut Club last Friday.  All American Heritage School students from grade 5 to 12 will take an inhouse field trip during the school year. They spend half the school day in science and engineering classes correlated to the mission and the other half of the day in the simulator.  Alex and I worked through multiple break out sessions to strengthen the curriculum of the mission and to properly tie the mission's theme to the classroom presentation.
Alex has done a tremendous job creating the space center at American Heritage.  It will bring engaging missions and lessons to the school's students for decades to come.  His work will also benefit the other Farpoint space centers (Telos University and The Space Place at Renaissance Academy). I look forward to conducting joint missions and possible competitions between the Young Astronauts at Renaissance Academy and American Heritage.
Mr. Williamson
Posted by Space Camp Utah at 1:58 PM No comments:

It was an eventful night last Thursday at the Christa McAuliffe Space Center's Honors Night.  Several honors were bestowed by Mr. James Porter, along with a few of the Center's set directors.  Those honors will be highlighted over then next few weeks on The Troubadour. Today we want to make a big announcement heard first at Honor's Night.

The Starship Phoenix has a New Set Director 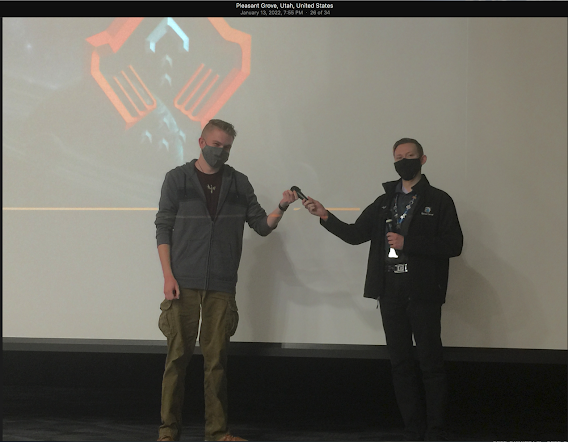 Mason Perry Receiving the Phoenix Microphone from Jordan Smith
Jordan Smith recently graduated with a degree in computer programming and is actively seeking  professional employment.  Anticipating the move might come before the next Honor's Night, Jordan decided to pass the microphone before his official retirement.  Mr. Porter invited all staff to apply for the position of Phoenix Set Director.  Applicants were interviewed and a final decision was made.
Attention, prepare for an important announcement. Hear Ye, Hear Ye.  Friends, Romans, Countrymen, lend me your ears.  Dominus Jameses Maximus Porterillius decrees that Mason Perry be appointed Set Director of the Starship Phoenix; so let it be written, so let it be done (forgive me blending my histories, it was done for effect).
In a ceremony stretching back to the earliest days of the Space Center, Jordan Smith - the current Set Director handed the ship's flight director microphone, spittal and all, to the new Set Director.  Mason accepted the microphone signalling his acceptance of the calling and his willingness to steer the ship along the course set by the Jordan's hard work and firm hand on the rudder.
Mason is an outstanding gentleman, scholar, and good judge of science fiction simulator stories.  Jordan trained him well and is pleased with the appointment.
Mason's first decree was a changing of the Phoenix logo.  For the past several weeks Mason was in design mode, sketching the logo then making a color change here and a tuck there. He just happened to have his new logo on hand to show everyone at Honor's Night. 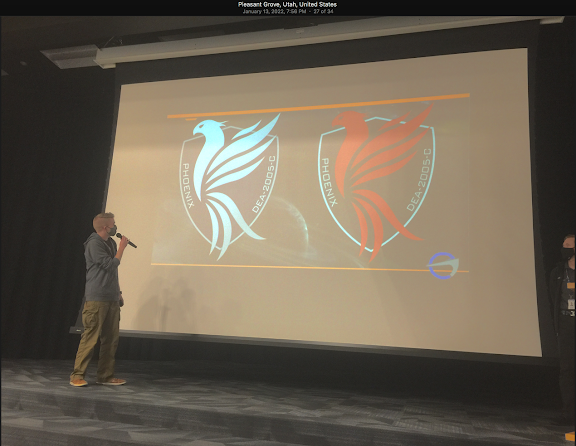 Being a current Space Center Cassini Flight Director, I have early access to bits of news.  One afternoon I asked Mason to put the logos up on the ship's two front monitors to see how it dressed the room.  What do you think? 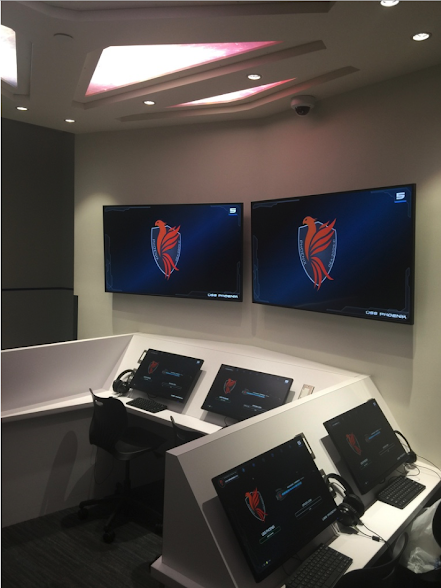 I like the logo.  The seven feathers represent the seven stations on the ship.  Mason has done well, but then he always has.
This makes Mason the Phoenix's Sixth Set Director.
1.  Megan Warner
2.  Alex Anderson
3.  Dave Daymont
4.  Miranda Rendell
5.  Jordan Smith
6.  Mason Perry
Congratulations Mason Perry on your appointment to Phoenix Set Director and a heartfelt Thank You! to Jordan Smith for doing a bang up job transitioning the Phoenix from the old Space Center to the new.  Your mark Jordan will be on the ship as long as she flies.
More on the Space Center's Honor's Night next week.
Imaginarium Theater
The Best Videos From Around the World Edited for a Gentler Audience
Posted by Space Camp Utah at 4:02 PM No comments:

Katie Brings Her Emotional Support Tree. The Christa McAuliffe Space Center Yearly Attendance Report. What To Do With a Bored Field Trip Cadet - Wow the Socks Off Them. Imaginarium Theater. 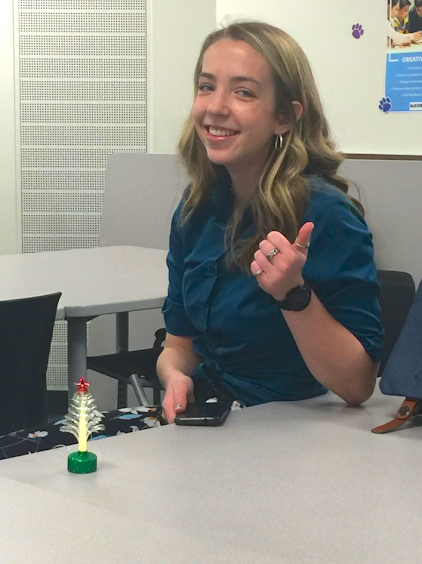 Katie
If you hang around the good people at the Christa McAuliffe Space Center in Pleasant Grove you soon come to realize they are a broad mix of some of the brightest, creative, and dedicated people you'll ever meet.  Now take those aforementioned qualities, and add it a touch of beautifully weird, and you'll know why the Space Center is the best place to work and play in Utah.
Pictured above is Katie.  Katie is an Odyssey flight director and Cassini supervisor.  I've had the honor and privilege of working with Katy on many occasion.  It wasn't until the Cassini's summer flight planning meeting a couple weeks ago that I got to see the 'other' side of Katy.  She came in, sat down, and took out a small Christmas tree.  It sat there through the meeting for all to enjoy.  It wasn't until afterwards that I put two and two together and realized that the tree was Katy's support tree.  Some have emotional support animals. Katy has an emotional support tree.  It gets her through the tough times - like an extended summer flight planning meeting with me in attendance.  I'm the one actively seeking out every mission plot hole and boring the room with trivial details on why a make belief ship shouldn't be in a make belief country doing scientifically impossible things.  I need to do what Star Trek does, put a technobabble bandage on the wound and call it healed.
Victor
The Space Center's 2021 Yearly Attendance Numbers. 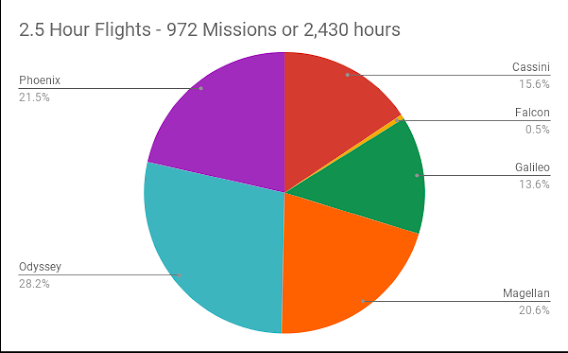 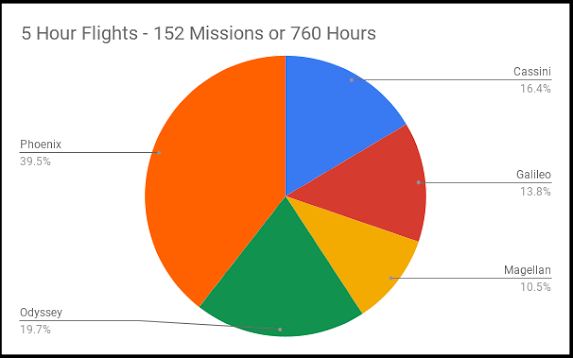 The Christa McAuliffe Space Center is Looking for a Field Trip Educator. Nothing Beats the Space Service. Also, This Week's Imaginarium Theater 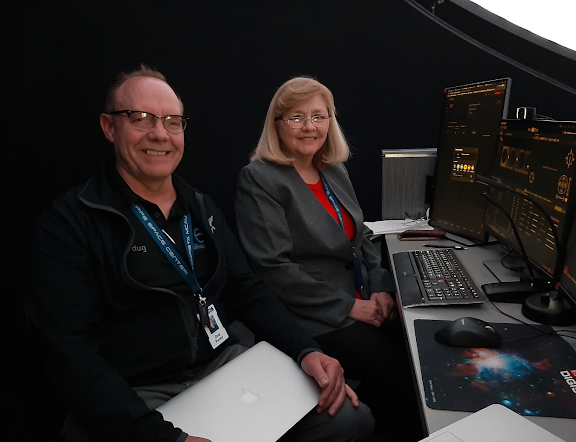 The Christa McAuliffe Space Center is looking for someone to help with the school day field trip program. You'll learn how to operate the planetarium AND you'll be privileged to work with three of the finest educators I know, James Porter, Doug Pusey and Lorraine Houston. I'd be applying today if it wasn't for 83 sixth graders at Renaissance Academy who need me, not to mention all the fun I'd miss at The Space Place with our Young Astronauts and Voyager Club cadets. If you're interested, read this short description from Mr. Porter, CMSC Director.

The Christa McAuliffe Space Center is looking for a dynamic and engaging individual who can help running field trip lessons and planetarium. Maybe you are space enthusiast parent who is looking for a job that lets you drop off your kids, go to work with us, and still be home before they get off school. That's this job!     If you are interested in the position the details of how to apply are included in this link. Please consider it.

Posted by Space Camp Utah at 12:34 PM No comments: