Mr. Williamson and the USS Vomitoria plus More Classic Pictures from the CMSEC's Voyager Era. Merry Christmas From the Space Center's Staff Home; A Happy Place for Those Who Gave Their All in the Line of Duty. Theater Imaginarium.

Hello Troops,
We start this Sunday post with a few of the recently discovered photos of the CMSEC taken during the Space Center's Voyager Era (1990-2012).  These photos were taken during one of our Friday night overnight camps a long time ago. I've been posted a few of these here and there, so let's get right down to business, shall we?

Wow, would you look at the example I'm setting for my staff in the photo above. That's me in rubber gloves cleaning up a healthy deposit of vomit in the USS Phoenix.  I never asked my staff to do something I wasn't willing to do, including the cleaning up of misplaced bodily fluids.  The absence of a smile shows I wasn't too happy about it but such things couldn't be helped.

It would be nice to remember who was flying the Phoenix that overnight camp.  Could it have been  Casey Voeks.  Casey always did like a good scare.  On the other hand, it was most likely Megan. There is proof.

My proof is the photo above. This was taken on the same roll of film as the others, proof that it was Megan flying the Phoenix that camp.  She looks guilty, wouldn't you agree?  Perhaps there's a shade of enjoyment in that face as she watches me suck up chunks with the shopvac.  Let's move on shall we? 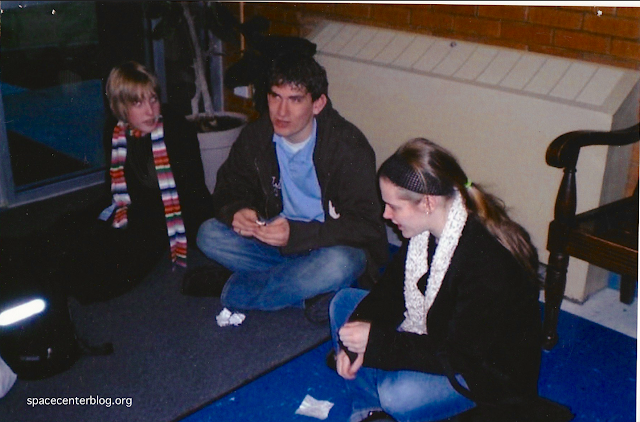 Sitting in the school's entrance are Hanne Paine, Bridger Maxwell, and Christine Stone.  The staff always found things to occupy their time while the Director was hard at work cleaning up vomit. From their attire, we can safely say that winter was upon us.

"We don't get vomit in the Magellan," Metta is saying in the photo above as she luxuriates in the Magellan's Discovery Room while I self righteously clean the vomit from the Phoenix's steel plating.
"I warned Megan not to run with the slime devil, but no one listens to me."  Metta's staff agreed. They had to, she was the one wearing Supervisor Blues.

BJ, the true professional he was, continued to flight direct the Odyssey while the vomit drama unfolded across the Briefing Room's entrance on his sister's ship Phoenix. What a cramped little control room; hardly room to stand.  The original Odyssey was a ship of nightmares.  You never knew what was going to break next.  But even with a bleak maintenance record, the Odyssey flew some of the best missions.  It was a favorite of many.

Knowing that Metta would be consumed by guilt at the thought of Mr. Williamson having to clean up gallons of puget regurgitated puke, the Magellan staff hid out in the simulator's control room hoping not to be found and sent to deal with the issue themselves. Warren looks sick just at the thought of it.
Nicole, always efficient in her manner, was consulting the task clipboard to see who was on Happy Bucket duty that evening just in case the call came for a bucket brigade.

Merry Christmas From the Space Center's Staff Home; A Happy Place for Those Who Gave Their All in the Line of Duty.

Yes, friends, it is a Happy Christmas to you all from our fallen friends living out the remainder of their confused days at the Christa McAuliffe Space Education Center's Staff Home.  I stopped by to visit six of the CMSEC's legends of the Voyager Era; once proud, strong, intelligent, and talented flight directors and staff; now exhausted, at times delirious, with strong leanings towards schizophrenia, shells of their former selves.

I knew it was dangerous to let teens run simulations. I was warned that creating multiple personalities, as required for simulation work, could be harmful to those whose minds were still developing, but I succumbed to their pleas and hired them.  Now, look at the price paid.  Thankfully I was proactive in my planning and set aside funds to build the Staff Home where our dear fallen comrades receive in-house care 24 hours a day for as long as it takes to restore them to the point where they can be moved to the Transition Home. And then, perhaps in ten or twenty years, they can be moved back into the general population.

Please think of them this holiday season, and if you're in the Lehi area, stop by during visiting hours and share a drop of hot cocoa and an After Eight Mint with them. They are so appreciative of little kindnesses.

Imaginarium Theater
The Best Gifs of the Week Edited for a Gentler Audience. Perfect for those Holiday Gatherings.