Bill Schuler is Building a Real Eye Catcher for the Space Center. I Think I'm Ready to Take the Universe's Helm. From the Archives: Celebrating the Work of the Space Center's Field Trip Educators. Imaginarium Theater. 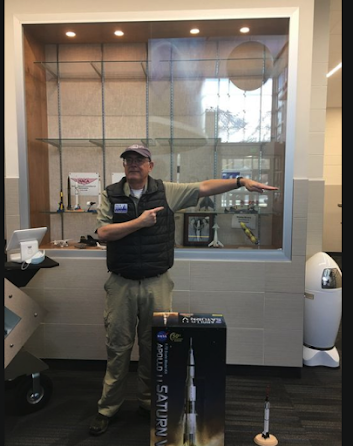 Bill Schuler
Space Center campers, volunteers, and staff remember Bill Schuler from his 20 years at the Center playing two primary characters in many Voyager missions: Mad Dog (leader of the Orion Pirates) and Admiral Schuler. In addition to his characters, Bill was a Space Center educator and video illustrator for many missions.
Bill retired from active Space Center service several years ago but that hasn't stopped him from adding his special touch to the educational mission of the Center. Today Bill builds the rocket models on display in the Space Center's lobby. This week Bill received a Dragon 1/72 scale Saturn V. It is huge at a little over 5 feet tall. In the photo you can see his 1/72 scale Mercury Redstone on the floor. His right hand shows roughly how tall the finished Saturn V will be - major size difference. This will be a real attention getter.
Thank you Bill for your continued service to the Space Center.
I Think I'm Ready to Take the Universe's Helm. 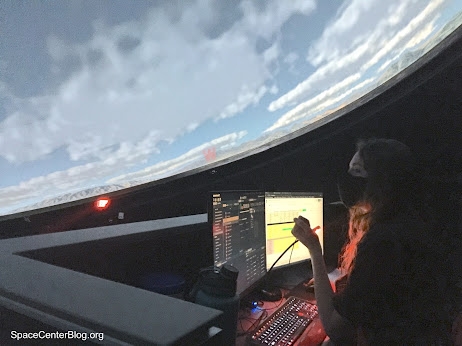 I was Tabitha Ricks' second chair up in the Crow's Nest at the Space Center's Planetarium on Saturday.  What a view of the universe you get from up there!  Being in the trainee's chair meant that I looked but did not touch.  No messing around in experimentation mode with the paying public. Tabitha excelled at the helm, skillfully guiding our audience from Utah Valley to Betelgeuse and the Pleiades and home again with stops at the sun,Jupiter,Saturn,Mars and various points in between.   There were a few glitches which only Tabitha and I knew about. She was too good at hiding such things from the audience. 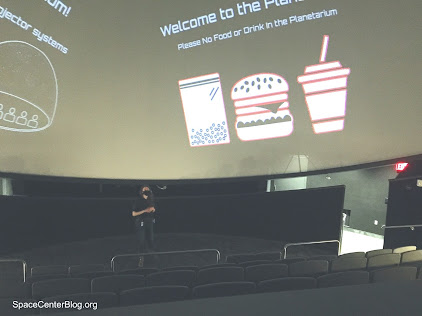 CMSC Planetarium presenters are called Navigators. All planetarium shows start with the Navigator's personal greeting from the floor. Above the Navigator are images showing the do's and don'ts everyone is expected to follow during the adventure.  "Motion sickness bags are located to the side of every chair," Tabitha said before explaining how to properly fit the floatation devices kept under the chairs should we suffer an inflight emergency and need to land in one of Titan's methane seas (I'm kidding about the bags and the devices, but I think I'll add such things to my welcome just to add a bit of Mr. Williamson to the show :)

The lights were dimmed and the show began. 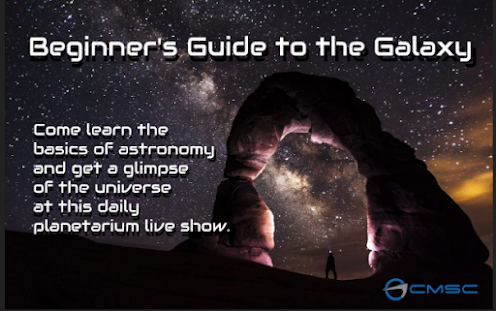 The Beginner's Guide to the Galaxy is perfect for celestial novices who want the basics without all the scientific jargon; a perfect show for parents and children who love space and want to learn more.
Tabitha was good; quite able to do the show as written. What impressed me were those other moments when a member of the audience asked a question and she jumped off script to illustrate her answer. With on hand working the keyboard and the other navigating the mouse, she projected planets and a multitude of other  celestial objects not included in the basic script - all to answer that question.  It will be awhile before I'm that good. 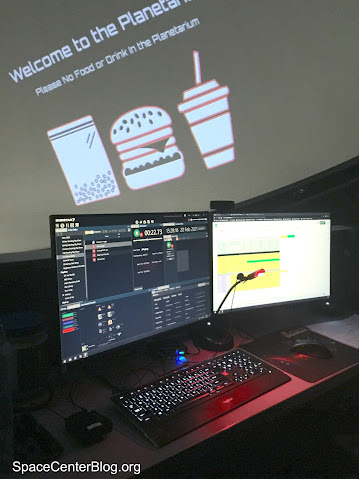 After the show Tabitha slid her chair back, turned to me and said the helm was mine.  There was no hesitation in my reply. With her at my side answering questions, I found my way through the show.  When all was said and done, I felt confident enough to put my name down for the 1:20 P.M. show this upcoming Saturday.  Tabitha will be there to help me when I inevitably mess things up, but with the tutoring I've received so far from Doug, Matt, and Tabitha I feel I am capable of presenting a decent show.  Wish me luck. I'll give you a full  report next post.
Mr. Williamson
From the Archives

The Space Center really has two personalities: 1) The ship flight directors/support crews and the educational staff. While the flight directors and their staffs are busily engaged torturing children in the simulators, there is another group of hard-working folks busily working to keep the "second field trip" group engaged with activities in the Star Lab and Discovery classroom. The educational staff members include Lorraine Houston, (myself) Sheila Powell, Aleta Clegg, and Megan Warner. Out-of-site and out-of-mind during the morning field trips simulations, these ladies handle wound-up, excited (occasionally rude and unruly-yikes!) classes of field trip classes in the Star Lab, Classroom, lunchroom and preparing the students for their flights.
We have a tight schedule to follow…just as in the simulators…"Have those kids ready for transport at 11:45 am sharp!" But prior to this, they must gather the school lunches off the busses and get them into the lunchrooms, brief the students on CMSEC/Central Elem behavior expectations, take the kids on potty breaks, move the kids through the school to the Star Lab and the Discovery Classroom, make sure they have a quick lunch, and get them properly lined up and introduced to the transportation procedures all before 11:45 am Sharp!!! A daily juggling act of time vs. student/class needs!!! Sheila, the newcomer, has been leading the morning classes, while Lorraine assists on the Voyager. Then, Lorraine, takes the morning simulation group into the Star Lab and Classroom. Aleta was the designer of the amazing classroom experience! Aleta and Megan love occasionally taking a break from flight directing the Odyssey and Phoenix to cover the classes as well….which gives Lorraine and Sheila a break.
These "classroom warriors" loosely call themselves the "Redcoats", because there are days (unbeknownst to one another), when they all wear red jackets or sweaters all on the same day. Their jobs in the Star lab (a student called it the "Star Igloo" the other day..hahahhhaha), classroom and moving the kids through the school is tough…just like in the simulators. As the Flight directors struggle with incohesive groups during a mission…the education members struggle as well.
Here's the difference, though, between the simulation groups and the classroom groups: The flight directors can torture the non-cooperative groups with tough alien negotiations and help from "Tex"…the classroom directors must deal upfront with rude comments, noise and disruptions in the Star lab and classroom settings. Handling the classroom experiences can be tough, but SO rewarding at the same time. There are days when the groups are talkative and refuse to listen and behave…Whew, those are tough classes! On those days, the Star lab is shut down early &/or the classroom experience is "simplified" just to get through the time. Too bad, because the class is missing out on some fine inspired learning!
On the other days--when the classes and teachers are well - behaved, engaged and prepared--the morning and afternoon field trip classes are so much fun to teach! The kids are excited and willing to learn! they ask lots of great questions and appreciate what the education staff are presenting to them. Those days are memorable and fun to teach for the educational staff!!!!
Needless to say, then while the flight directors and crews are directing student field trip groups in the morning…so are the "Red-coats" directing students through "the other aspect"…the educational side…through CMSEC at the same time. We are all working together to provide a one-of-a-kind, unique experience for kids….and loving every minute of the experience. No matter what kind of classes come our way!! Both "sides" of CMSEC staff handle the daily challenges the individual school/classes present to us! Separate, maybe at times, but all of us are working together as an amazing group that thrills, inspired and amazes children daily!!!!
Sheila

The best videos from around the world edited for a gentler audience.