The History Kept Alive in the Simulator Control Rooms. The 6th Grade Dragons Earn the Highest Score for Their Long Duration Mission this Year. Imaginarium Theater

Space EdVentures is the term I use to describe the art and science of teaching through the use of simulators and simulations.  There are five Space EdVentures centers in Utah County - Christa McAuliffe Space Center (the mother center) The Space Place (Renaissance Academy, Lehi) Lions Gate (at Lakeview Academy, Saratoga Springs), Telos Discovery Space Center (Telos Academy, Vineyard) and Canyon Grove Academy.

Each Space EdVentures Center has at least one functioning simulator AND each simulator has a Control Room.  Most, if not every, control room is also a historical time capsule for its simulator.  Within those control rooms are little things that speak of the simulator's history.  Little things which record something about the people who spent so much of their lives playing the Great Wizards of Oz behind the curtain.Today, The Troubadour starts a new series focused on the history displayed in Space EdVentures' control rooms.  We start with the Phoenix. 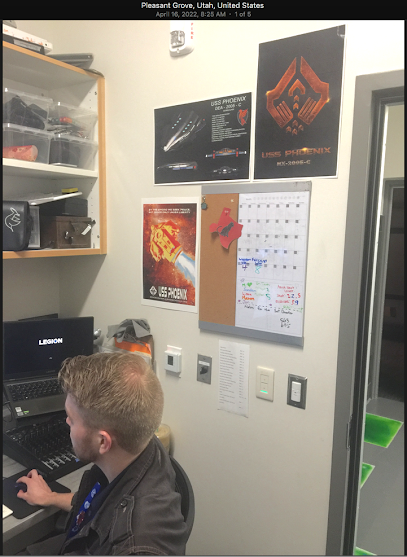 Mason at the Phoenix Controls
Last Saturday, as I prepared the Cassini for a five hour early Saturday mission, Mason invited me into the Phoenix's Control Room to show me the restored Phoenix panel. 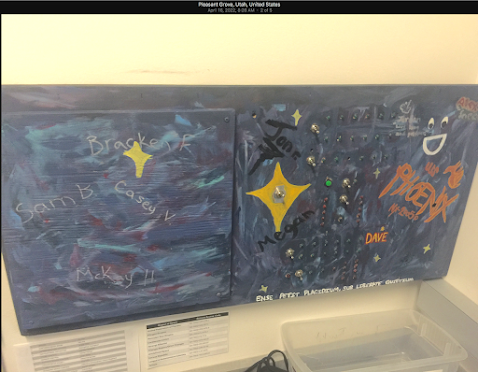 The panel was hung next to the Phoenix's second chair station.  I recognized it on first glance but couldn't place where I had seen it before.  Mason saw my confusion and filled in the details. "That's the panel that hung in the old Phoenix Control room above the second chair station."  It came back to as he spoke. I knew exactly what he was talking about. 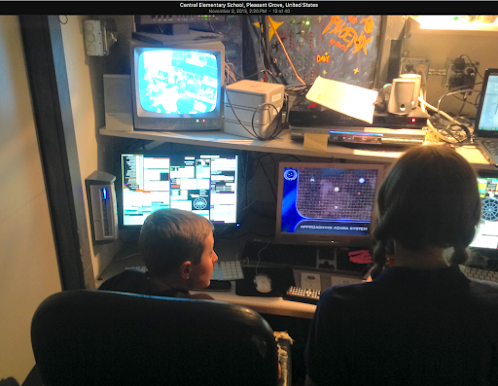 The Panel as Seen in the Old Phoenix's Control Room 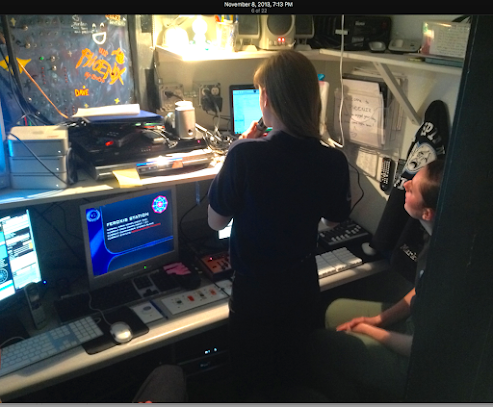 That panel filled the window I had built into the Phoenix simulator. The window was originally to hold an interactive map allowing the crew to track intruders.  That idea didn't work.  In its place I put a backlit panel 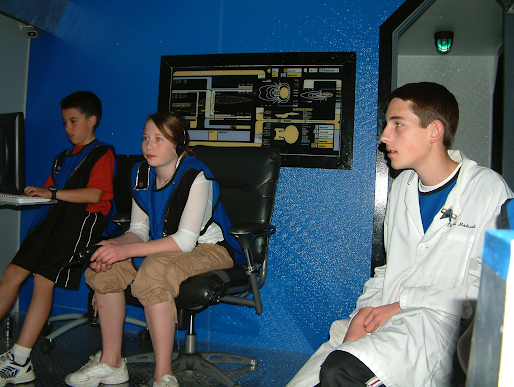 The Phoenix's backlit panel
The panel had one flaw, it was designed for the Voyager.  Look closely and you'll see a galaxy class starship.  Poor Phoenix, it was a simulator in search of an identity.  In my defense, I needed something to occupy that space until something else could be created.
Luckily that something showed up in 2008 thanks to Matt Long, Alex Anderson, and Megan Warner.  A new DS panel was built and installed. 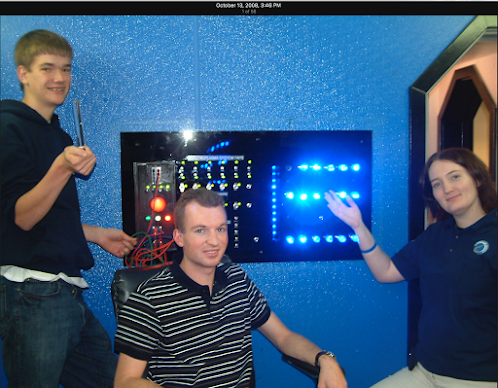 Alex, Matt, and Megan showing off the Phoenix's New DS Panel
The back of the panel looked like this 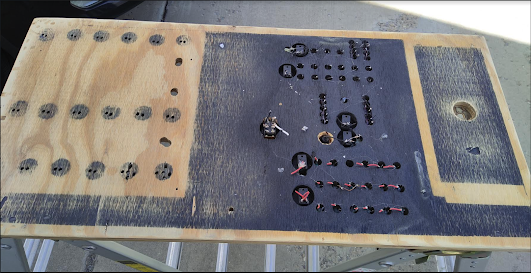 And covering the panel's back - the signature panels and a piece of Phoenix history which will always be a part of the simulator's control room.

The names painted on the back of the panel are people who played a significant role in the Phoenix's history. 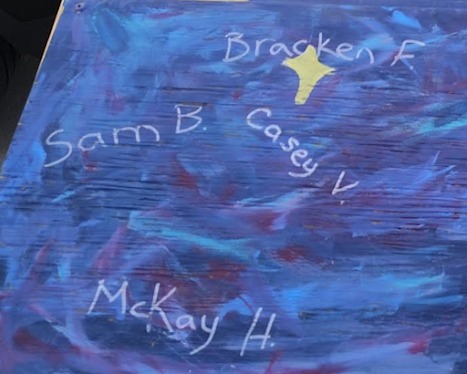 Bracken F.  Bracken Funk is now the director of The Space Place at Renaissance Academy.  He and I work together to staff the school's Young Astronauts and Voyager Clubs. The Starship Voyager is his baby.
Casey V.  Casey Voeks is the co-founder of InfiniD Learning.  InfiniD classroom simulations are used in schools throughout Utah and other states.
McKay H.  McKay Harding is a computer programmer and cyber security specialist for Zion's Bank.  He is a lifelong space center supporter and helps me with computer classes from time to time at Renaissance Academy.
Sam B. I believe that stands for Sam Brady but I could be wrong.  I'll wait for someone who knows to fill me in. 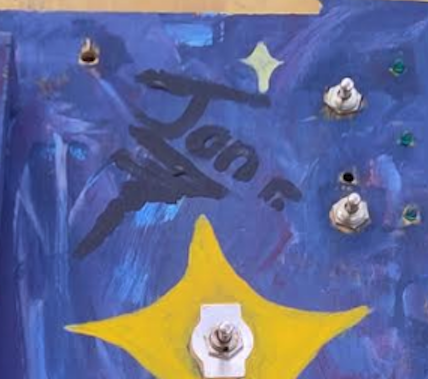 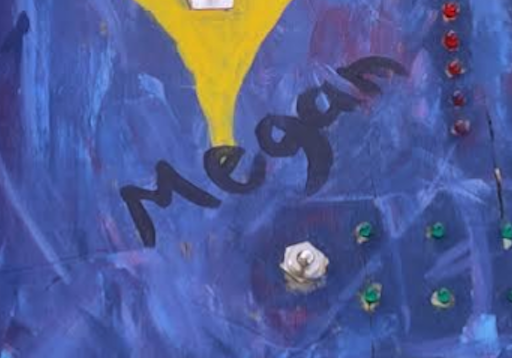 Megan.  Megan Warner was the Space Center's Director from June 2013 to June 2014.  The Phoenix was Megan's pride and joy.  She currently works with Matt Long in the film equipment rental business and is Bracken Funk's right hand person for private missions on the Voyager. 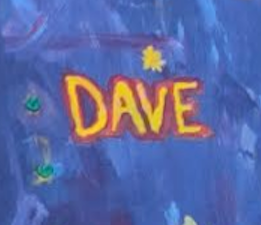 Dave.  Dave Daymont was the Phoenix Set Director for several years.  Dave works for the Alpine School District as a on site IT technician for several elementary schools. 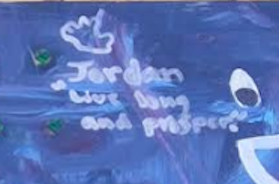 Jordan.  Jordan Foutin.  Jordan flew the Phoenix for a year or two.  Jordan is the CEO of Stormteam Simulations. 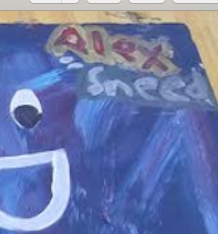 Alex.  Alex Anderson is the creator of Thorium.  Alex and his wife live in Boston where he works as a computer programer. 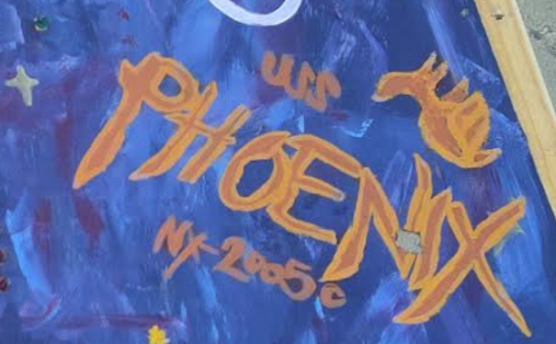 A reminder that the Phoenix opened in 2005.

And finally, the Latin motto. It translates to, "By the Sword We Seek Peace, but Peace Only Under Liberty".
There are a few retired and current Phoenix flight directors whose signatures are missing from the panel:  Jordan Smith, Miranda, Lissa, Scott and Mason - the current set director.  The signatures will be added over time.
There are a couple of other historical items (or will be historical items over the years) in the Phoenix Control Room. 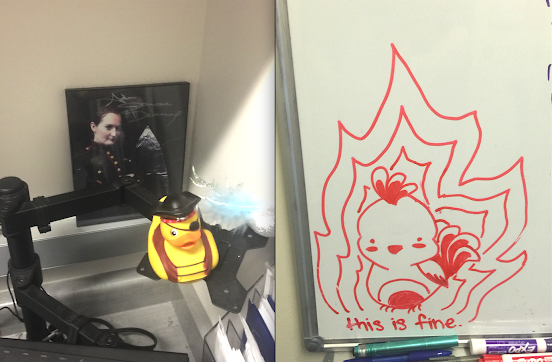 1.  The Picture of Megan Warner.  It has been in the Phoenix since 2013.  The mission Silhouette was flown in the Phoenix during the supers of 2013.  In the story, Miranda's doctor character was a big fan of Megan's Admiral character. At lunch Miranda (in character) would go up to Admiral Megan and ask for her autograph.  This was the prop used in the story.
2.  The pirate duck.  The pirate duck is the mascot to the Phoenix's first 5 hour mission in the new building, "Finding Libertalia".
3.  Katie Young's "This is Fine" chick-phoenix in flames drawing done with expo marker.  This drawing has a longevity problem given the medium used in its creation.  Katie Young drew the phoenix / chick after commenting that the Phoenix whiteboard was boring.  She told Mason that he'd better keep it there in pristine condition until she returns from her LDS mission.
Renaissance Academy's 6th Grade Dragon Squadron Earns an All Time High Score. 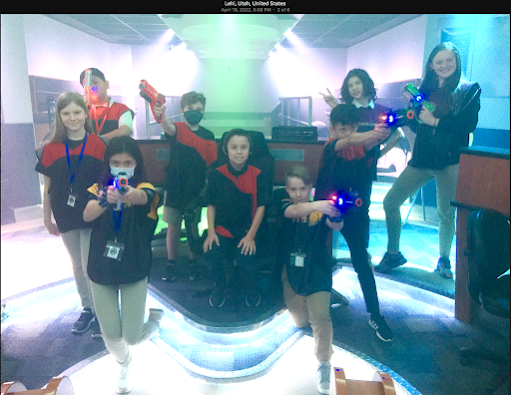 The Sixth Grade Dragon Squadron very happy with their achievement
Renaissance Academy has nearly 180 third through ninth grade students enrolled in the after school Voyager Club and Young Astronauts Club.  The students are divided into grade level squadrons of 8 - 10 members. Each squadron is given a name.  Last Tuesday the Sixth Grade Dragons finished the 8 month  Long Duration Mission "Iron Curtain" with a score of 135 points. That's pretty good considering a perfect score was 100 points.  Their extra points came from completing several secret mission objects not outlined in their mission briefings. 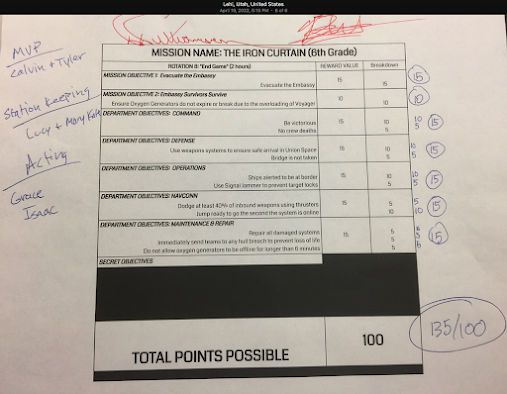 Their final score sheet with our signatures
This squadron is an example of rising from the ashes of defeat to win. Not only have they earned the highest score for a single round of all time (to date), they also earned the school year's lowest score for a single round after failing quite miserably in an earlier round of flights. There is a lesson to be learned here.
May I also congratulation them on being awesome students.  I say that as their proud classroom teacher (math and history).  Congratulations Dragons for a job well done.  You end the 8 month Long Duration Mission on top!
Imaginarium Theater
The Week's Best Videos From Around the World Edited for a Gentler Audience.
Posted by Space Camp Utah at 10:57 AM