The Staff of the Christa McAuliffe Space Center Gather for a Summer Planning Breakfast. My Students Transition to a European Parliamentary Democracy and are About to Learn Some Hard Lessons in Life. Imaginarium Theater 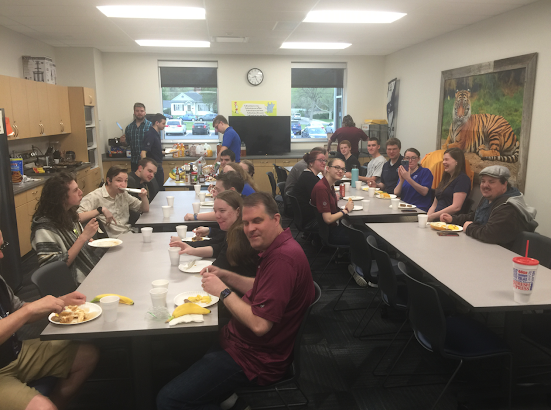 Saturday, May 7th.  The staff of the Christa McAuliffe Space Center gathered for an early, pre-private mission breakfast. The fixens were good; sausages, waffles, fruit, bagels, and scrambled eggs. 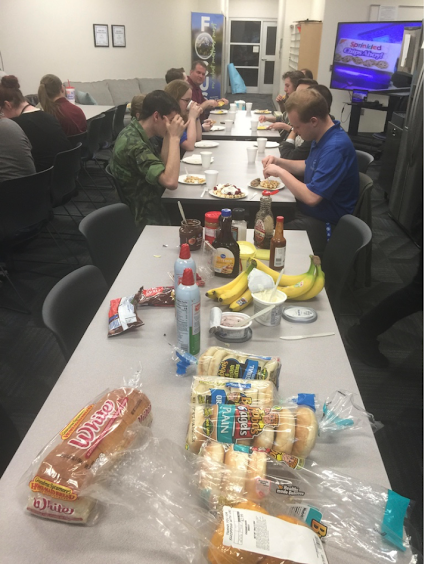 Gone were the old staples of a Space Center breakfast; Gogurts, Tampico, and nearly all you could eat Walmart glazed donuts. The Space Center has come a long way. 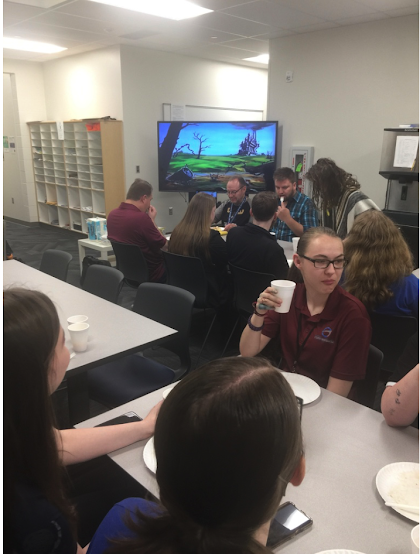 A television was brought in to ensure the younglings had a screen to stare at just in case face to face conversation led to awkward pauses.  Old cartoons from their collective childhoods was on the line up. 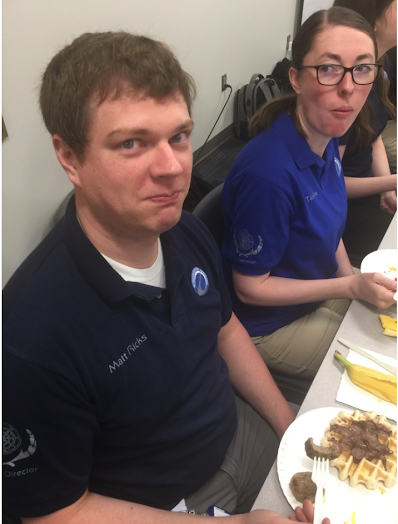 Matt and Tabitha Ricks made it a family outing by bringing their young daughter.  There was a sea of outstretched arms wanting to hold her.  She represented the next generation of Space Center volunteer. 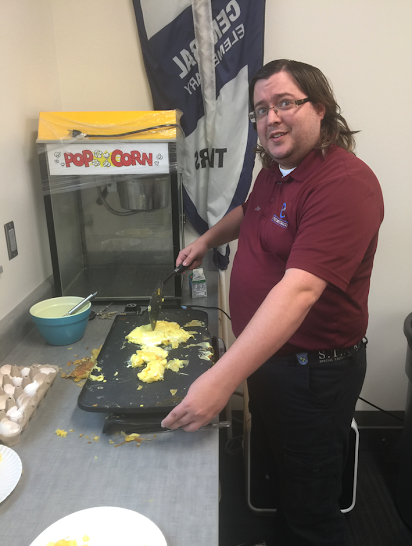 It was good seeing Jon Parker doing something other than flight directing the Cassini.  He has proven once again that he is definitely NOT a one trick pony.  On a side note, the scrambled eggs needed more salt, but I'm not one to complain :)  On another side note, I would have paid good American money (not that phoney Canadian stuff) to see Jon in a hair net as he scrambled the eggs. 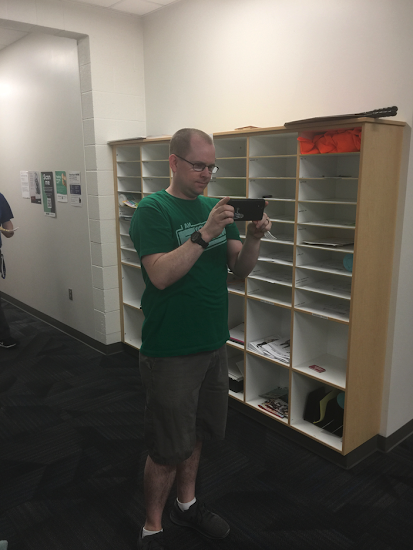 Mr. Porter conducted a staff meeting after breakfast was cleared away.  The Space Center is preparing for a busy summer camp season.  James wore his summer shorts to set the proper atmosphere for the occasion.
The staff and volunteers of the Christa McAuliffe Space Center and The Space Place at Renaissance Academy are offering a nice assortment of summer space camps.  Visit their websites to learn more:  SpaceCenter@alpineschools.org and
SpaceCampUtah.org.
The Art and Science of Experiential Learning.  My Class Transitions to Post World War I Germany

My 6th Grade history classes completed our World War I / Absolute Monarchy simulation and retired our beloved Czar Tyler.  He did a great job getting us through the Russo/Japanese War and getting us into World War I as Russia.  On Monday the students arrived to see the room transformed into post World War I Germany. 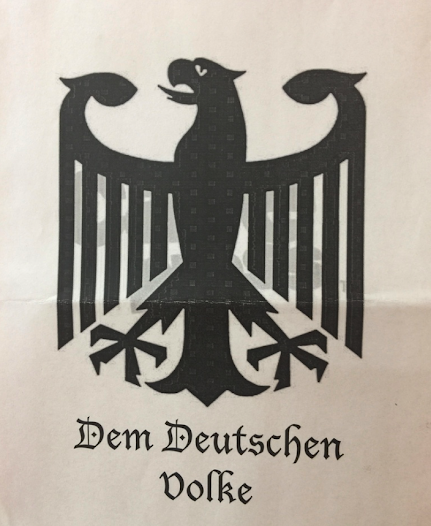 The new doorway sign as you enter my classroom 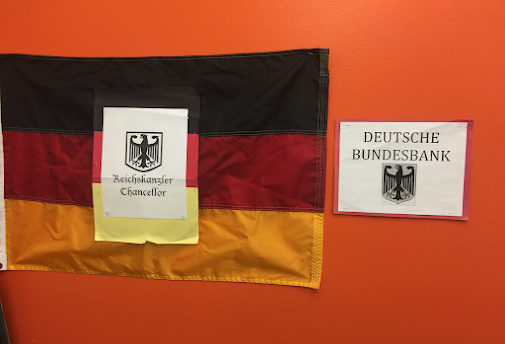 The Flag and Signs Behind the Chancellor's Desk in my classroom

This unit has a couple objectives.  1) Students participate in a European style parliamentary democracy.  2)  Students learn economics through the hyperinflation soon to befall them - the same hyperinflation that decimated the German mark during the Weimar Republic. 3)  Students will understand the how and why of the rise of fascism and nationalism and the reasons for World War 2. 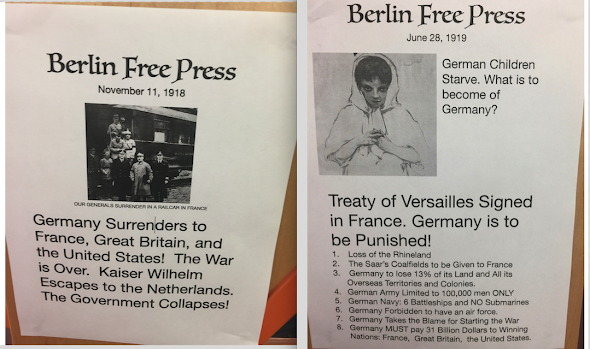 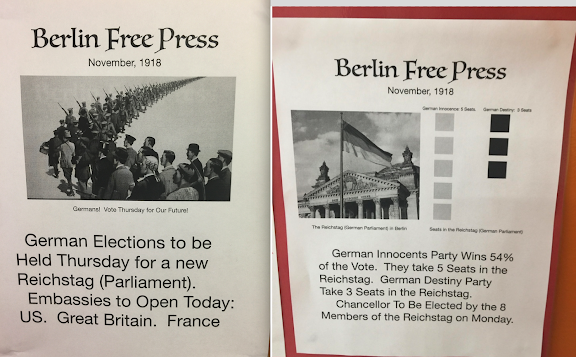 Of course, this simulation runs in the background of our normal history curriculum. We are learning about the Aztec, Incas, and Mayans right now and next week will introduce the Reformation.

A parliamentary democracy needs political parties.  My classes created two parties: The German Innocents and The German Destiny Parties.  Elections for the nation's Reichstag were held on Thursday.  The students spent Monday - Wednesday campaigning.  Preparing yourself, there was a good deal of mudslinging going on in the campaign. Politics can be a dirty business. 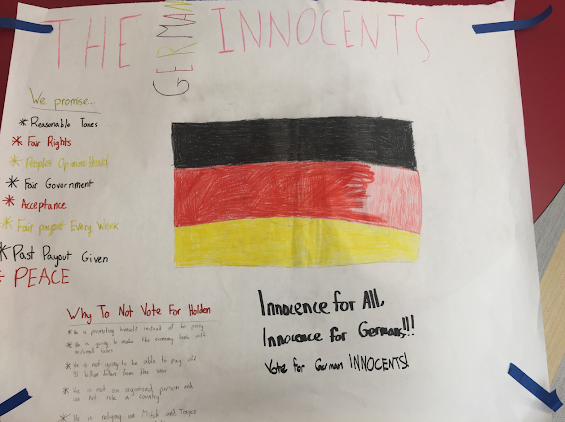 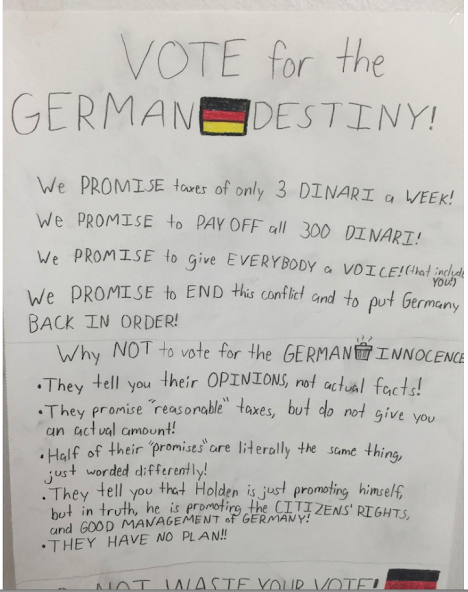 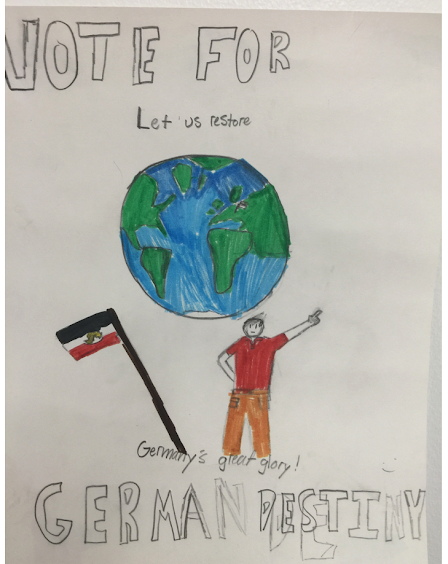 The results of Thursday's elections were given in Friday's newspaper. One member of each party counted the votes and did the percentages (great way to teach math, right). 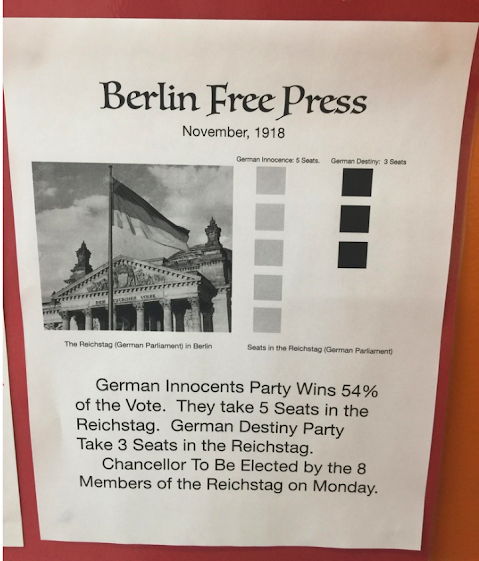 A new government will form on Monday.  This government will be tasked with honoring the terms of the Versailles Treaty. Good Luck in that!  Who says learning history is boring???