The Space Academy's Young Mission Controllers. Register for Summer Space Camp at the Academy. Free STEM Kids Workshops at the CMSC. Honor's Night at the CMSC. Mrs. Houston is Back. Imaginarium Theater. 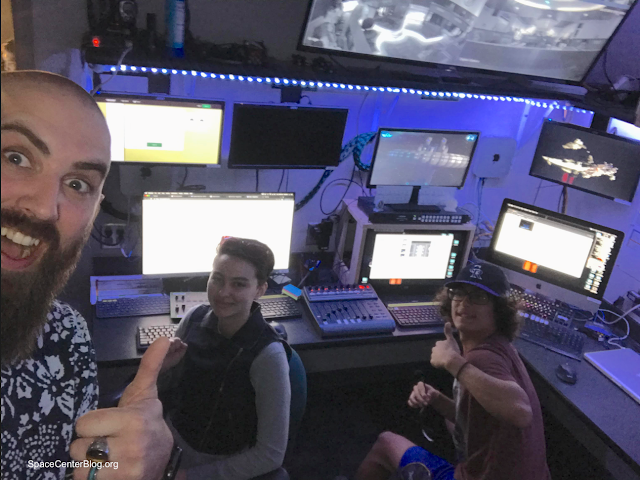 Tabitha and Stephen first joined the Space Academy's Young Astronauts as sixth graders. Now as 8th graders they've worked their way into the Mission Controller's chairs as InfiniD Mission Controllers.  A Mission Controller is similar to a Space EdVentures Flight Director in many respects, but because an InfiniD mission is largely automated, a Mission Controller's job is easier and thus requires less training - a necessity for school's without dedicated brick and mortar simulators.  Because of this level of automation, the Space Academy is able to draw upon the talents of our best 8th graders to our school's InfiniD missions for grades K-8.
The guy with the beard is teacher extraordinaire Camden Robinson, Renaissance Academy middle school history, debate, speech, and space tech teacher. Camden wears another hat at school, he is the our InfiniD supervisor.  Camden trains our young MC's .  Either he or Bracken Funk are on hand for every mission to monitor the MC's to ensure quality control and can, at a moment's notice, jump in if necessary.

The Space Academy offers several space camp dates to choose from. Visit SpaceCampUtah.org to read about the camps and to register.  Spots are filling fast so register today. 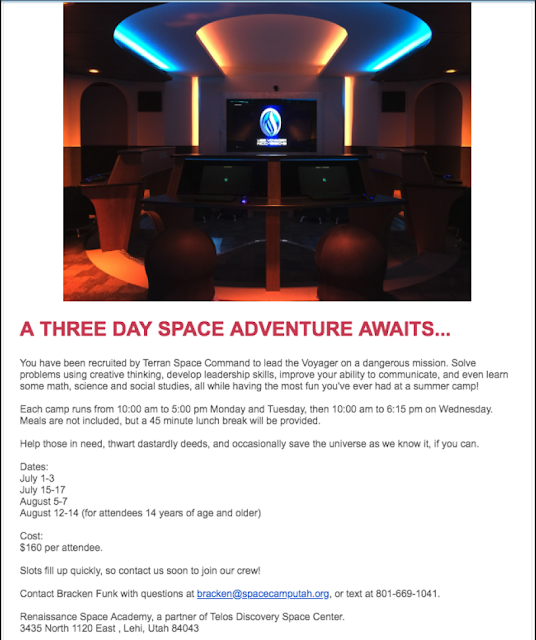 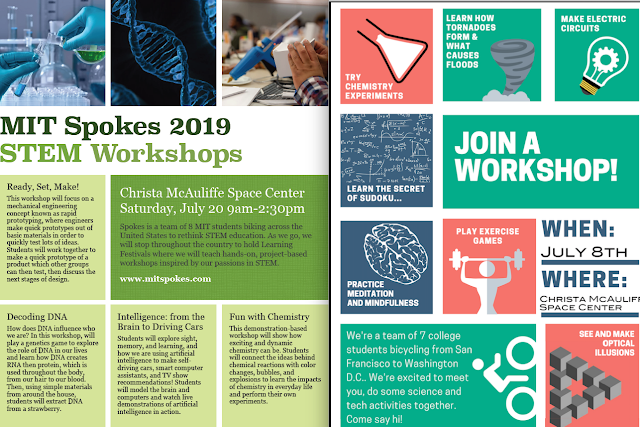 The Christa McAuliffe Space Center is pleased to offer free summer workshops sponsored by MIT and Stanford University students through Spokes. July 8th & 20th for ages 12-16
Register at: spacecenter.alpineschools.org/camps/
The workshops are taught by students from MIT and Stanford. These students bike from one side of the United States of America to the other. During their trek they stop and hold workshops for youth to engage their minds and introduce them to new principals related to their fields of study.  The workshops were a hit last year so be sure to register today.  They will fill fast. 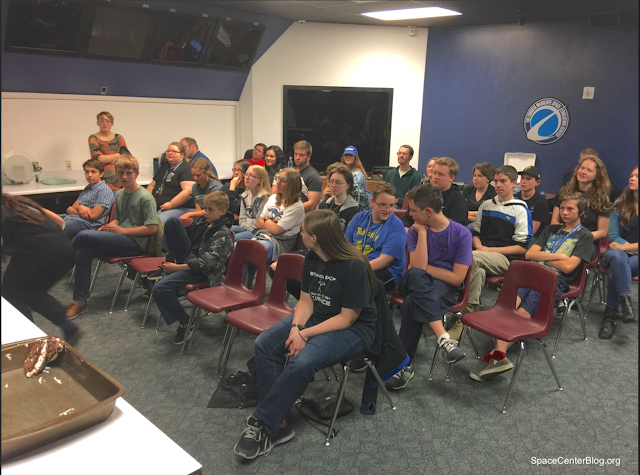 It was a good turnout for last Tuesday's Honor's Night at the Christa McAuliffe Space Center.  And yes, if you're wondering if those are Lorraine Houston's award winning Chocolate Cookie Oreo Surprises pictured in the cake pan on the left, you're right.  See what you miss when you don't attend Honor's Night. 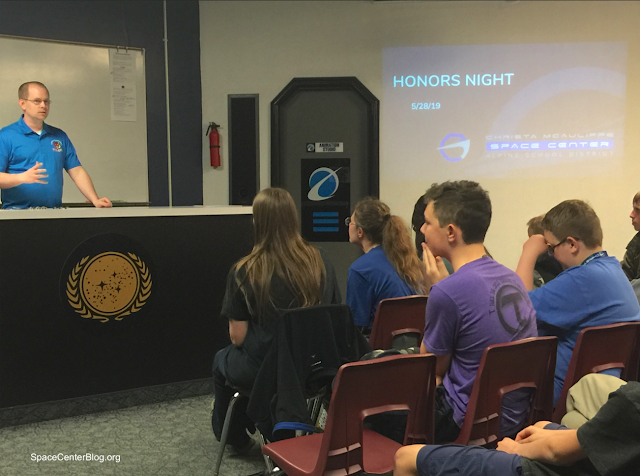 The Christa McAuliffe Space Center celebrated another Honors Night on May 28, 2019. I make it a point to attend every Honors Night for numerous reasons; 1) I started the place. 2) I volunteer as the Saturday Refreshments Coordinator providing somewhat regular weekend refreshments to the Center's hard working staff and volunteers. This includes Assistant Space Center Director Jon Parker's Dr. Pepper - his elixir of choice which keeps him awake and coherent during those Friday nights and Saturdays of back to back missions. 3) Let's not forget the fact that I represent The Troubadour which has covered all Honor's Nights since the blog's inception in 2008.
The following is my report on Honor's Night.  While much of the report is factual, there may be bits here and there added to keep me from getting too bored as I recite the evening's events 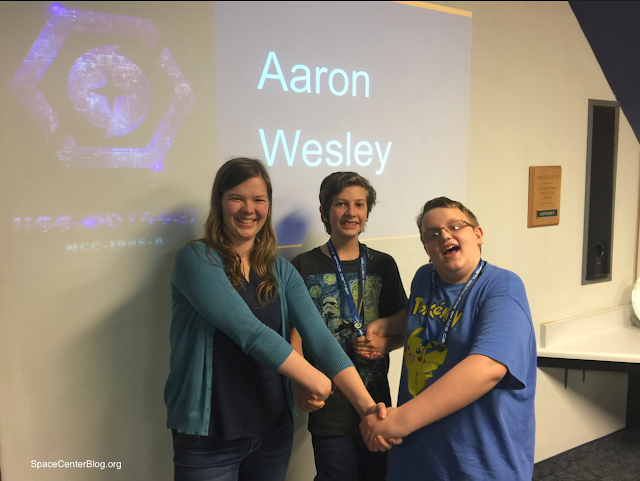 The first honors of the evening went to Aaron and Wesley. They each received their Odyssey Advancement Pin from Odyssey Set Director Natalie Anderson.  Getting a simulator's advancement pin is no easy task as these young men will testify.  The Odyssey requires both a bridge (doctor's) pass and a second chair pass.  Congratulations to Aaron and Wesley on their achievement and may they continue to rise through the ranks until they eventually take Natalie's place (their secret ambition but they'll never admit to it). 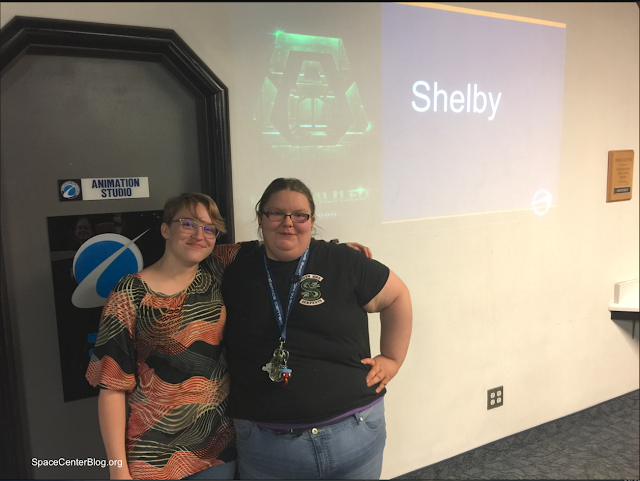 Brylee Perry had the privilege to present a Galileo Advancement Pin to volunteer extraordinaire Shelby. Shelby is making quite a name for herself at the Space Center. I'm happy to take partial credit for her success. I worked with Shelby in her sixth grade class at Shelley Elementary School in American Fork during the Space Center's refit several years ago and encouraged her to get involved at the center. 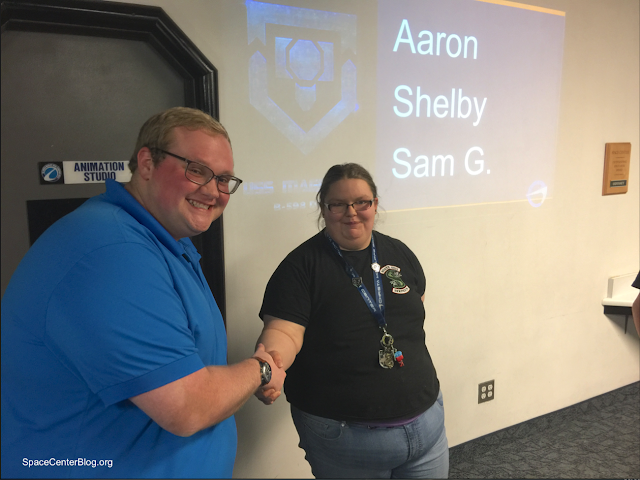 Having one advancement pin isn't good enough for Shelby.  She was called up to the front of the room by Connor Larsen to receiver her second pin of the evening - a Magellan Simulator Advancement Pin.  Shelby is one of those people always looking for a challenge.  She tackled the Magellan and won.  Connor had to surrender one of his closely held pins. Be sure to know his smile is forced. 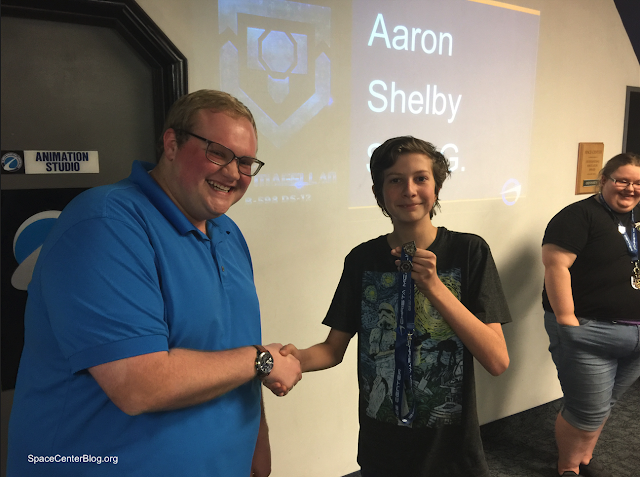 As if giving up one Magellan pin wasn't hard enough, Connor about lost his supper at having to award a second Magellan Advancement Pin to Aaron.  Shelby took great delight at watching the presentation from the sideline.  They do love to torment Connor. 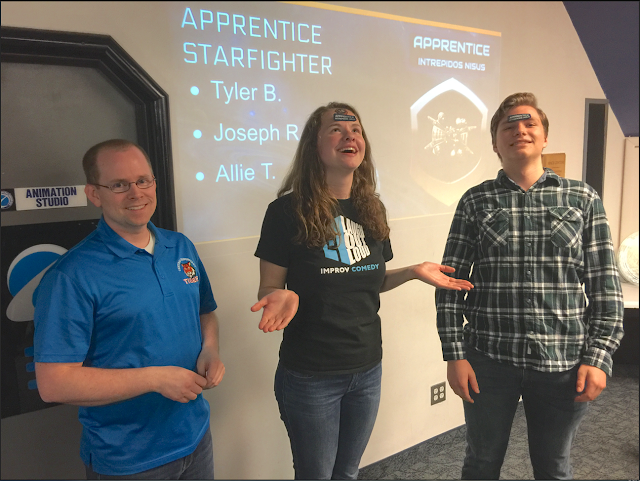 Volunteer for at least 100 hours at the Christa McAuliffe Space Center and you're welcomed into the Apprentice Starfighter Flight Group. Look at these two great young volunteers.  You're looking at the next generation of Supervisors and Flight Directors.  Who knows, there may even be a future Space Center Director in this group. Mr. Porter got his start the same way, as a young volunteer way back when.....  Congratulations Allie and Joseph and thank you for your 100 hours of service. 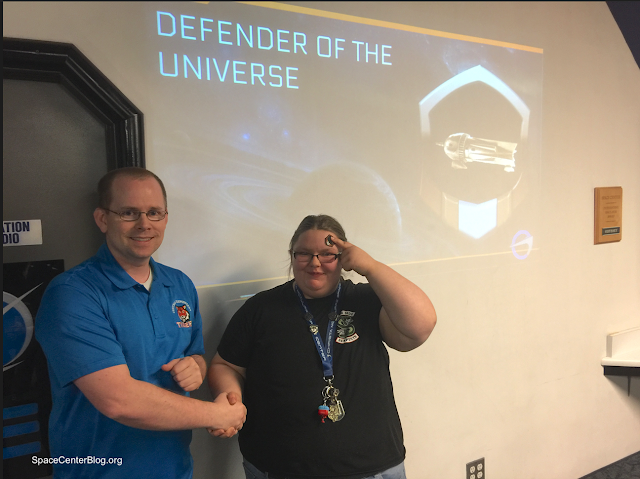 Oh Shelby, you really know how to steal the show.  With her lanyard already aglow with multiple simulator advancement pins, Shelby was once again called forward to be inducted into the Defender of the Universe Guild for her 1000 hours of service.  Mr. Porter started the ceremony by speaking of Shelby's contributions to the Center, especially as a daytime field trip intern.  He spoke of her can do attitude and willingness to get things done.  Shelby was the star of the show for sure. 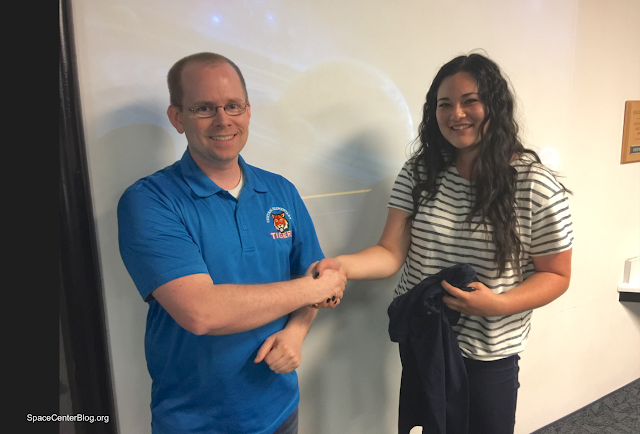 Now here is something you don't see often, a Space Center director awarding another Space Center Director the coveted navy blues.  The CMSC awards the Blue Shirt to supervisors. The Navy Blues are for flight directors only.  Receiving her Navy Blues is Sydney Brown, co-director of Reality's Edge at Canyon Grove Academy.  Sydney is another of those famous bi-center employees. During the school day, when she is not needed at Reality's Edge, she flight directs the CMSC's field trip program. 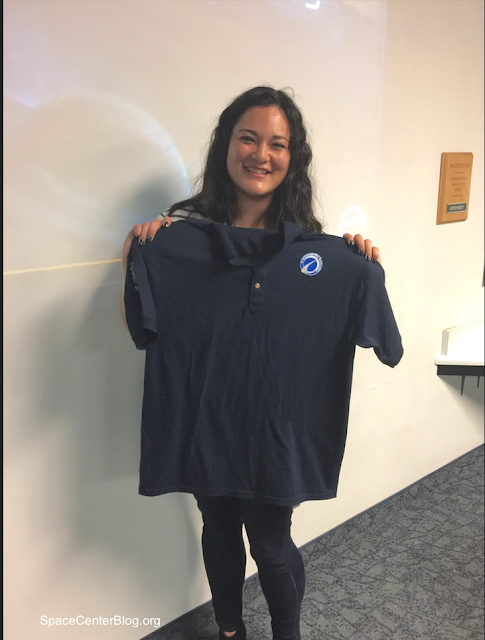 I've known Sydney for a few years now and have visited Reality's Edge many times. Sydney is outstanding at her job.  You feel a peaceful calm when you walk into her center. It is a calm that comes from happy staff, volunteers, and campers.  She is one of the hardest workers I know.  She is committed to Space EdVenturing and is an asset to the program: So Say we All.  Congratulations Sydney. 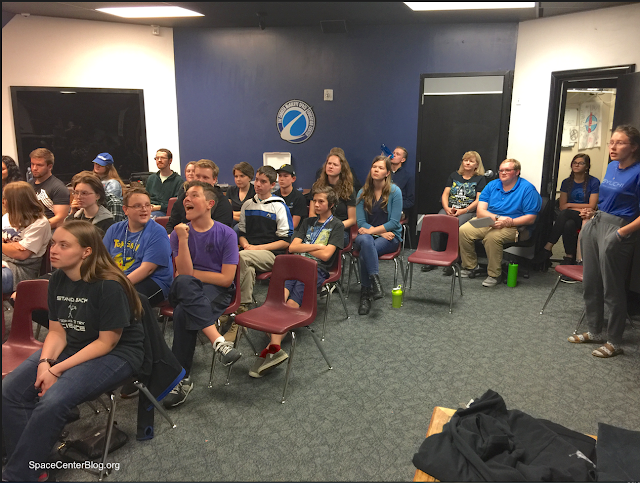 Look at the back row where the aging space center old timers sit.  Do you see Mrs. Houston sitting next to Connor Larsen?  That's right, Lorraine Houston is back after a long illness.  Mrs. Houston is the longest serving CMSC employee and substitute mother to every one of the Center's hundreds of staff and volunteers over the nearly three decades of service she's given the program.
I know I speak for all when I say how happy we are that she has returned.  It may not be full time service yet, but we hope soon.  Welcome Back Mrs. Houston. Your absence has been felt and there are hundreds and even thousands of campers, staff, and volunteers to come who need to experience a Lorraine moment to brighten their day.

Imaginarium Theater
The Best Videoettes of the Week Edited for a Gentler Audience.  On Youtube and Vimeo!

Or watch the theater on Vimeo.