We Have Great Staff and Volunteers at Utah's Five Space EdVenture Centers. What Does it Take to Produce and Stage an Outstanding Summer Camp Season? Construction Update on the New CMSC. Imaginarium Theater

Great staff and volunteers are the heart of each of our programs at Utah's Space EdVenture Centers. We remind ourselves of that fact each time a crew of enthusiastic young astronauts board one of the 13 starships in fleet.  The importance of keeping our head in the game and giving 100 percent is perfectly summed up with this sign that hangs near Mr. Porter's office door at the Christa McAuliffe Space Center. 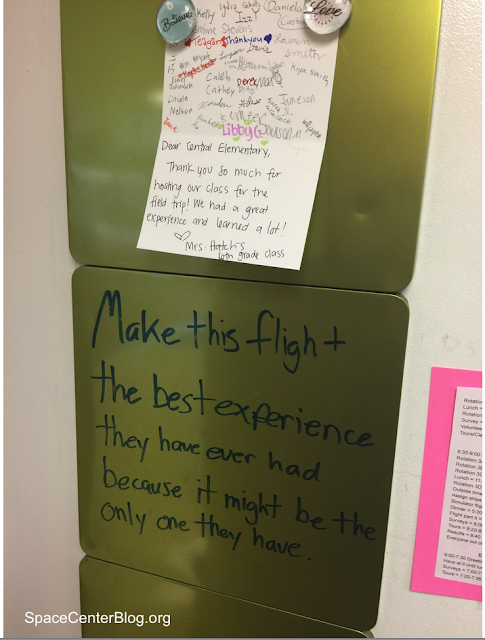 In a recent Facebook post, Mr. Porter wrote about starting every mission with the right frame of mind and to remember to make that flight the best experience the crew has ever had because it might be the only one they have.  Mr. Porter wrote:

"This phrase has been something we have been trying to keep in mind this year. We have been so busy with the new developments and many changes within the Space Center we wanted to make sure we don't lose our focus....
So as a part of that here's a huge thank you to all of the amazing staff and volunteers of the Space Center. This last week they have been feverishly working to get us ready for summer with new stories, touch ups to the ship, repairs to equipment, and every other little aspect that makes our magic that much more potent. All with the goal to make it so every experience is unforgettable...."


If you're a current member of staff or a volunteer at one of the Space EdVenture Centers I want to thank you for your dedication to our great endeavor of creating a spacefaring civilization.
"Why did you create this program?" is a question I've been asked many times since I opened the Christa McAuliffe Space Center nearly 30 years ago.  And usually in the same breath the questioner tries to answer his own question with, "Are you trying to get kids to want to be astronauts?"
The true answer to the question is simple; I created the Space EdVentures program to encourage kids to learn about space in the hopes that mankind will look up and see where destiny intends us to go. I want to create a space faring civilization. The first step toward that goal is to find ways to excite our students to excel in their schoolwork. Space exploration demands excellence in math, science, technology, engineering, and of course the arts and humanities - two subjects which enrich our lives and help us understand what it means to be human. Utah's five Space EdVenture centers, along with our friends at InfiniD and Dream Flight Adventures, are doing just that.
Our collective mission is realized everytime one of our starships ventures into the unknown. Thank you to all who work toward this goal. Have a great summer camp season!

What Does it Take to Produce and Stage an Outstanding Summer Camp Season?  Let's Ask the Staff and Volunteers at the Space Academy

1.  New Missions.  Summer space camps need new missions.  Many campers are mult-center campers, meaning they fly in multiple simulators at any of Utah's five Space EdVenture Centers.  Imagine the pressure our centers are under to produce new missions every summer, something which has been done for the past 29 years.  Space EdVenture missions are not your average sci-fi.  Our missions cannot be character centered like you find in sci-fi books, movies, and TV shows.  They can't be planet centered stories (lots of time out of the ship) because our simulators are built in 21st century neighborhoods.  Hard to get Lehi to look like Vulcan.  Overall we do a pretty good job.  Sure there are the occasional stinkers (Saladin) but we like to forget those and move on.

2.  Special Effects.  Creating cool animations is the next step once a mission has been written.  Not many of our staff know how to create eye popping tactical cards.  Those few who do are beyond busy at the moment.


3.  Loading everything into your mission control computers and testing to see if it displays and runs correctly. 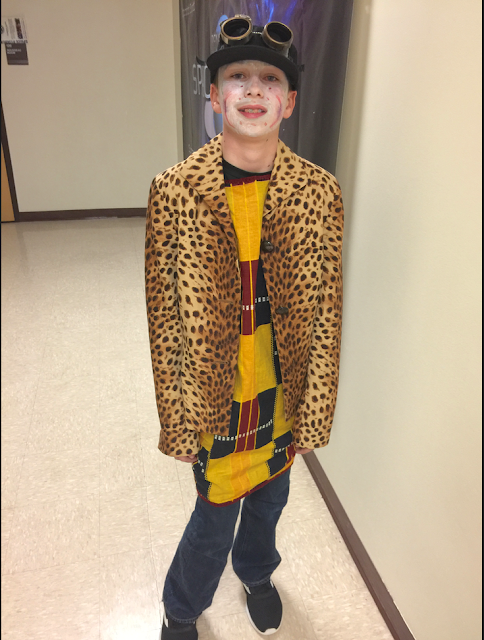 4.  Props and Costuming.  Each mission requires costumes and props.  Kyan, a Space Academy top notch 8th grader, models his take on Piddlewee evening wear.  Piddlewee are Farpoint's Paklids.  They come from the planet Uck.  They're members of our union but constantly find ways of irritating Terran Space Command with their antics. 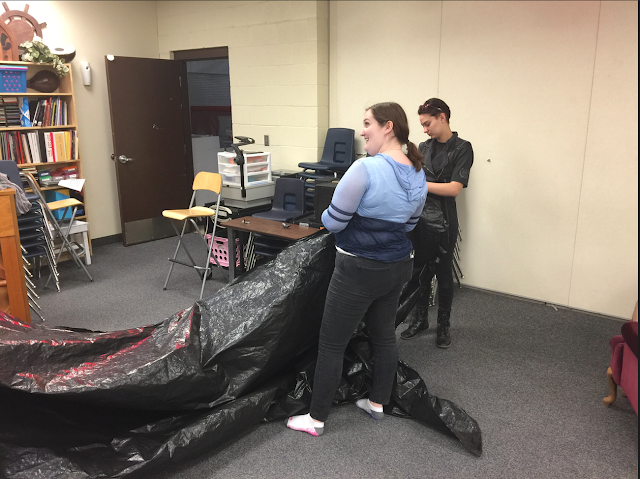 5.  Landing Party Prep.  Every summer camp mission has a landing party or two. We call them "Away Missions".  Years ago we called excursions out of the simulators "Deck 21".  Deck 21 was usually the kindergarten hallway at Central Elementary.
Above you see Megan Warner and Tabitha working to put up a few black plastic barriers in the school's music room. During the summer the music room will be the bridge of a Piddlewee SpaceBug. 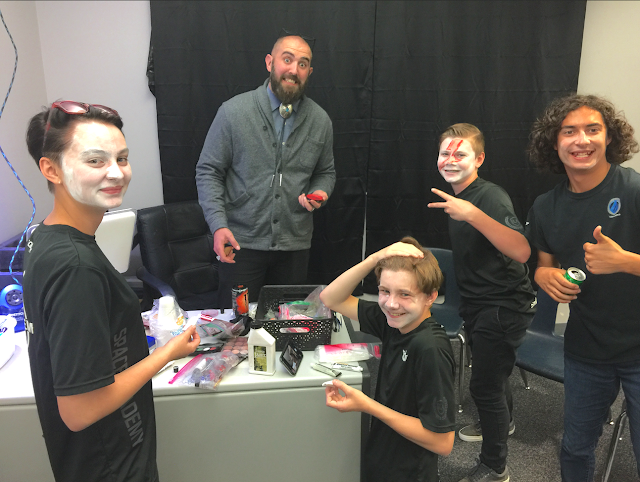 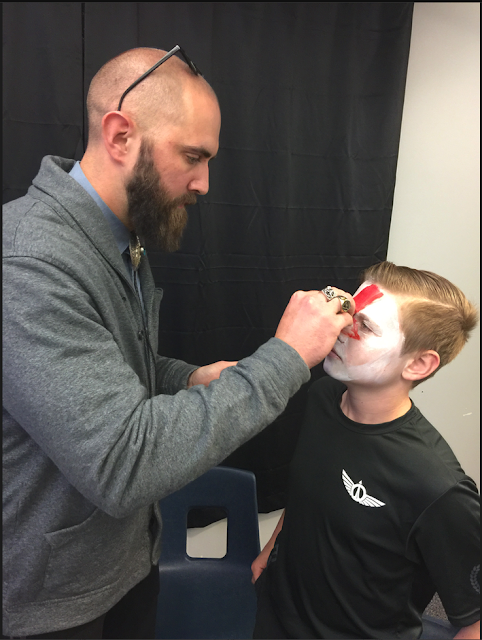 6.  Make-up.  Mr. Robinson is teaching several of the Space Academy volunteers how to apply make up.  Mr. Robinson is the Academy's InfiniD coordinator and teaches the Space Tech classes in addition to his history, speech, and debate classes.  Not only will the volunteers learn make-up, they will also learn how to create and apply darn good looking silicone wound prosthetics. 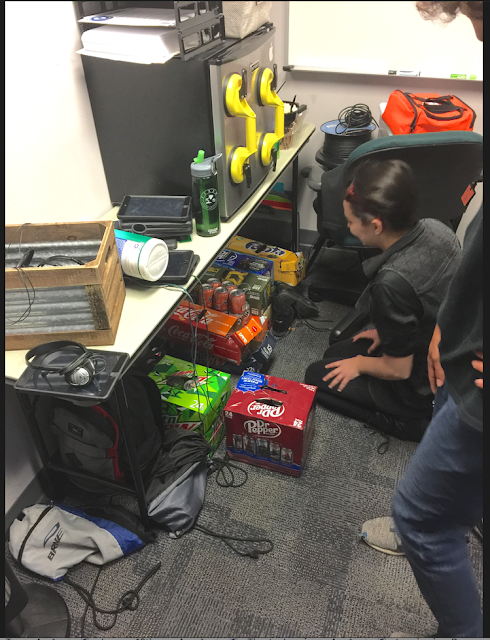 7.  The proper liquid refreshment for a long summer camp season.  The USS Voyager is powered by fusion and jump engines which use helium 3 as fuel.  The Voyager's staff and volunteers require a different type of fuel to keep them going.  We keep the control room fully supplied.  A happy, hydrated staff makes for happy campers. 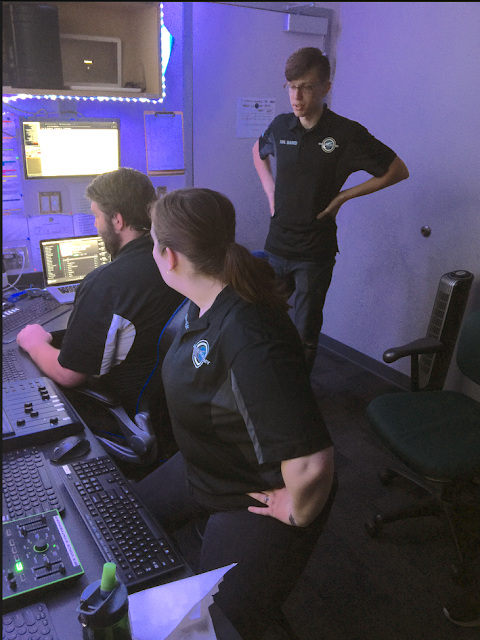 8.  Dress rehearsals.  Every new mission needs at least one dress rehearsal to find bugs in the code and plot holes in the mission and landing parties.  Bracken, Megan, and Spencer discuss a few issues in the Voyager Control Room. 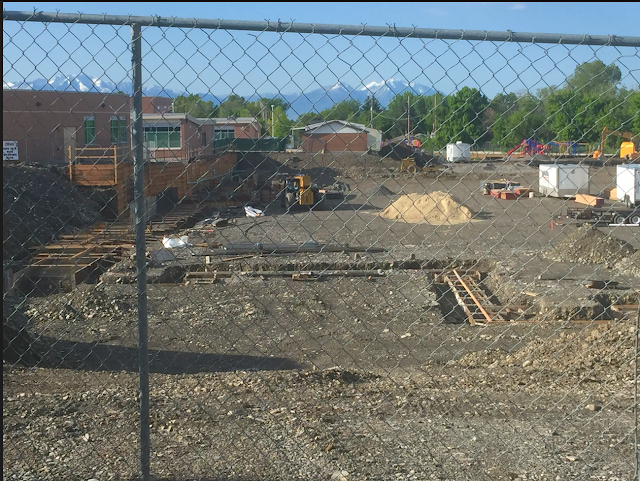 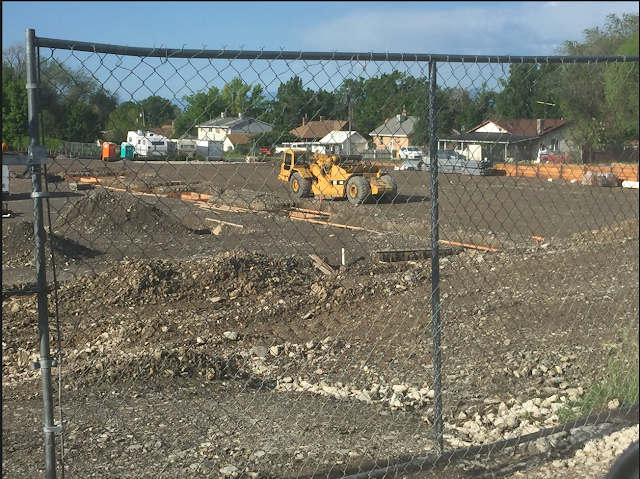 As you can see in the two photos above, construction is moving ahead of schedule on the new Space Center and Central School.  Footings are being poured.