(Note: I wrote this on Friday but forgot to post).

We are winding down the hours to the end of this summer's last Ultimate Camp.  It has been a good camp with great campers.  The hours have been long and saying "I'm tired" would be a lie.  I passed being tired two days ago.  I'm running on fumes, gut determination and a steady supply of Diet Dew.  And don't think I'm the only one.  I have a fantastic staff of employees and volunteers who've been here in the trenches with me mucking away in the mud, wind and pouring rain.

My staff and volunteers have one thing going for them I don't have - youth.  They have lots of drive they can call upon from their youthful cells and fast burning metabolisms.  My body is like a dog that wants to go outside and do his business in the yard. A dog barks, yelps, scratches at the door and generally makes life miserable for his owner until his wish is granted.  Come 9:00 P.M. my body wants to go to bed and fights me for every minute past 9:00 P.M.  I force it to stay awake.  It is a never ending battle I fight every time I'm here for a Space Center overnight camp.  I've been on every Space Center camp over the last 21 years - never missing one - not one.  Last year I did a bit of calculating.  I discovered I've spent over 3 solid years sleeping on my pad in front of my desk if you take every night I've slept here and put them back to back over the Center's life span.

Matt Ricks is spending some of his time going through the Center's desk drawers looking for buried treasure.  He hit the jack pot.  He found several old video tapes of the Voyager's first missions filmed back in the early 1990's.  He converted them to DVD.  I'll post them on this blog in the near future. In addition to the video, Matt found a few discs with old camp pictures.  I'm going to post them over the next few weeks, allowing you to join me in a stroll down Memory Lane.

Tonight I start with a few pictures from our summer camps of 2006. 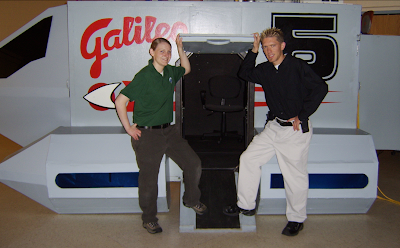 Stacy Carrol with The Great Fish (Kyle Herring) standing in front of the original Galileo.  This Galileo, just like the current Galileo, sat in the school's lunch room.  The old Galileo was smaller, holding 5 people in a small cramped space.  It was built by Kyle Herring when he was a student at Provo High. Its first home was Sunset View Elementary in Provo, Kyle's old elementary school.  The school had a change in administration and enthusiasm for the Galileo project wained.  The Space Center bought it from Kyle and moved it here.

The old Gal had a long career of entertaining thousands of children over the years, but time takes its told and nothing lasts forever.  This Galileo V was made of wood, requiring constant maintenance.  We all came to the realization that she
had to be replaced.  Kyle took on the project, and because of his hard work, we have the Galileo VI today.  Stacy is the Galieo's current Set Director. Stacy and her team work tirelessly on keeping the Galileo running and well maintained. 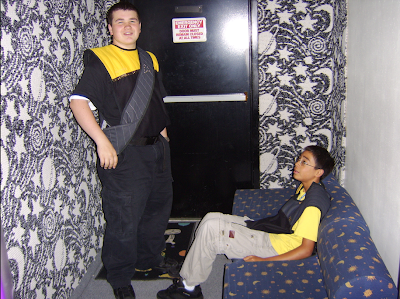 This is the Voyager's brig before the last remodel.  The fold out couch/chairs were comfy.  The volunteers and staff didn't mind getting caught and thrown in the brig in those days.  They'd unfold the chairs and have a snooze well out of camera range of the control area.

I chose the wall carpeting and regret I ever did so.  It was a glow in the dark carpet I thought would look cool in the brig's black lights.  It didn't. 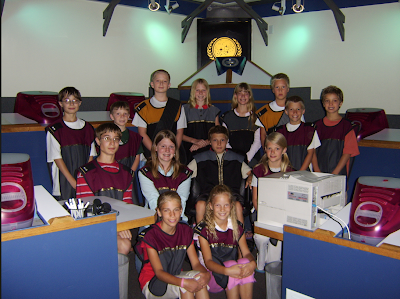 This is the old Magellan before its last remodel.  This is one of the summer crews of 2006.  The Admiral's station was at the very top.  The kids enjoyed the old Magellan just like the campers today enjoy the new Magellan.  The satisfaction scores didn't go up or down after the remodel.  That goes to show that the power of the Space Center experience is the story, not so much the set.