Oh the Phoenix! What the staff and volunteers had to give up for one more ship at the Space Center.

In 2004 I decided to rip the staff bunks out of the Briefing Room and build another simulator at the Christa McAuliffe Space Education Center to replace the Falcon. The Falcon was our set up and takedown every weekend six person cafeteria ship. The planetarium domes were getting too many holes, the equipment too battered. The Falcon had to go!

The Phoenix would be small, six people tops with the smallest control room by far of any of the ships. The staff had mixed emotions: another ship vs. keeping their beloved overnight camp triple bunks built where the original 1956 classroom's student cubbies and coats hung.  In the end, I won out. I was the director and my decision was to build another ship. Another ship for school field trips was a necessity not to mention another ship for private parties. Small ships were very popular, just the right number of kids to squeeze into a minivan.


Marty Wooten was our contractor with assisted by David Kyle Herring. David Kyle and I designed the ship, which wasn't an easy task - trying to squeeze as much ship as we could into such a small space.  We imagineered the layout with six classroom chairs, trying every possible combination until today's Phoenix was decided upon.  David Kyle championed the tiered diamond plated flooring complete with something fairly new for the time - rope or string lighting.


The construction of the Phoenix gave me the excuse I needed to redesign the entrance to the Odyssey. This gave the Odyssey a boarding area. 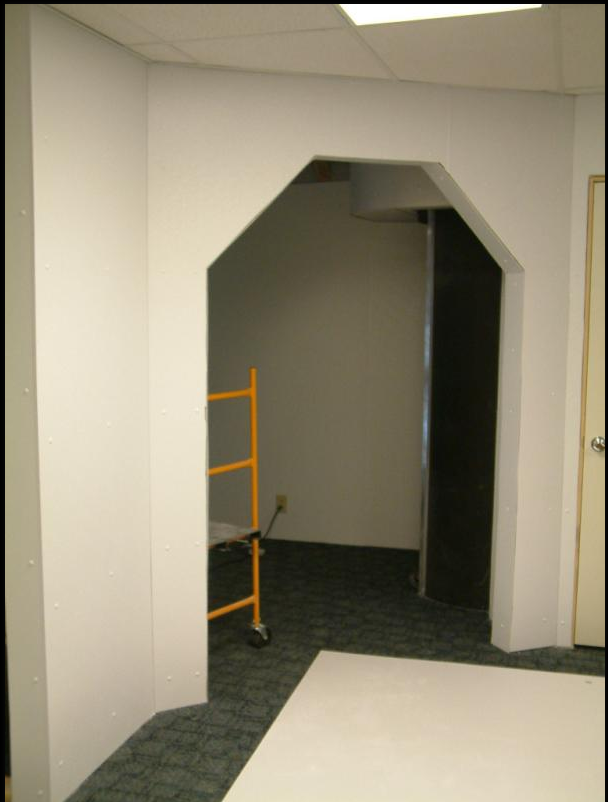 The Odyssey new entrance as seen in the photo above taken from my desk in the Briefing Room. The Odyssey's turning door with the cool curved top opened into a small loading bay. A quick left turn took you into the ship.  The door directly ahead of my desk was necessary for fire code.  A turning door doesn't give rapid egress.  The Phoenix's entrance is where the yellow scaffolding sits. 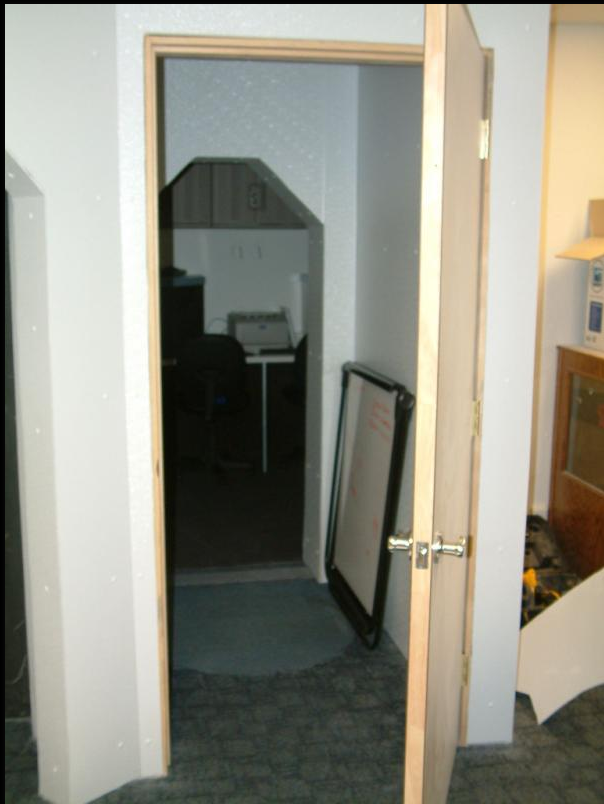 This was the new Odyssey entrance. The two carpets show where the entrance's darkroom turning door once stood. 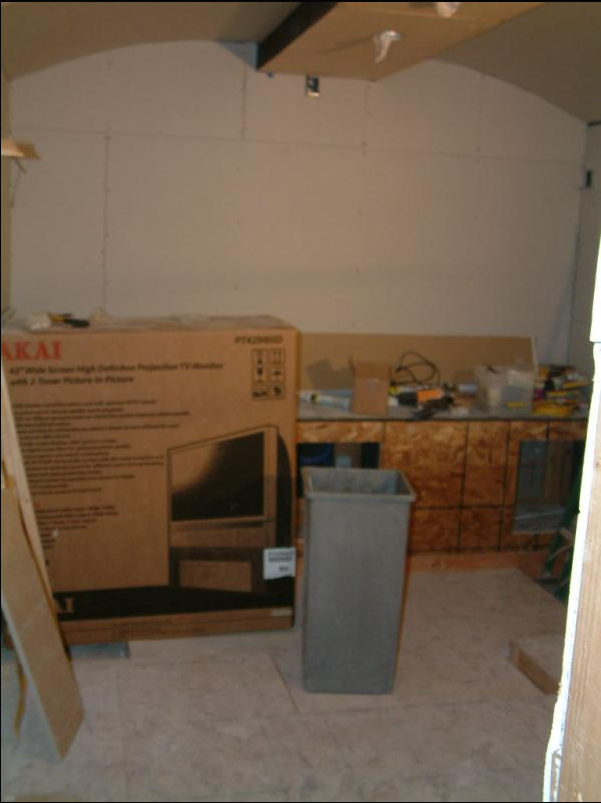 This photo shows the Phoenix Bridge facing forward. The wood flooring is in with the tiers visible. We needed a platform for the 45 inch large screen - HDMI no less!  The platform at the front was used for dial and switch panels and other engineering activities.  It was also just the right size for a volunteer or staff to crawl in and scare the bejeebies out of the unsuspecting crew. Open a hatch and grab a leg was the preferred procedure for ultimate shock value.


Today's Phoenix has a darkroom door of its own but that's not how we opened. The original entrance was the door. The small crew walked through the door into the cramped phone booth sized decontamination chamber; we opened the sliding door, and into the ship they went.

The current darkroom door was added a few years later.  I found it at a neighbor's garage sale one Saturday morning.

Do you have a favorite Phoenix story either as a camper, staff, or volunteer?  Please send it along for a future blog post. My email is spacecamputah@gmail.com.

All the Best!
Mr. Williamson 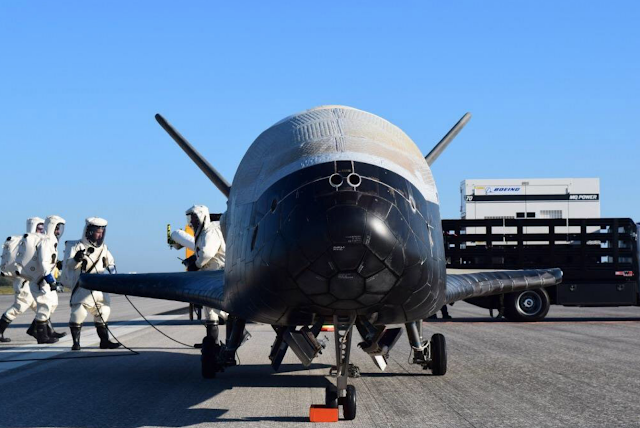 Front view of the X-37B on the shuttle runway at the Kennedy Space Center. Engineers wear protective suits so they will avoid contamination by any volatile chemicals. (US Air Force photo from Spaceflightnow.com)

The fourth X-37B mission has finally come to an end. Currently the US Air Force has two X-37 spacecraft (that we know of), and this was spacecraft number - well, we don't know, because the US Air Force does not officially disclose which of its spacecraft are up there during a mission. We DO know that it lifted off on May 20, 2015, on an Atlas 5 booster from Cape Canaveral LC-41. It spent 718 days in space. 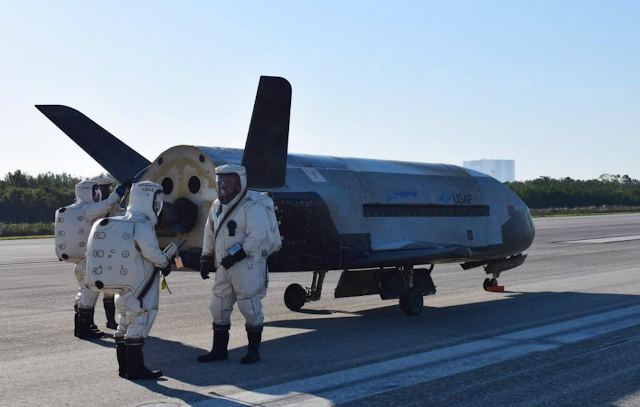 Side view of the X-37B. (US Air Force photo from Spaceflightnow.com)

For more information on this mission, check out SpaceFlightNow.com:
https://spaceflightnow.com/2017/05/07/x-37b-spaceplane-returns-to-earth-and-makes-precision-autopilot-landing/ 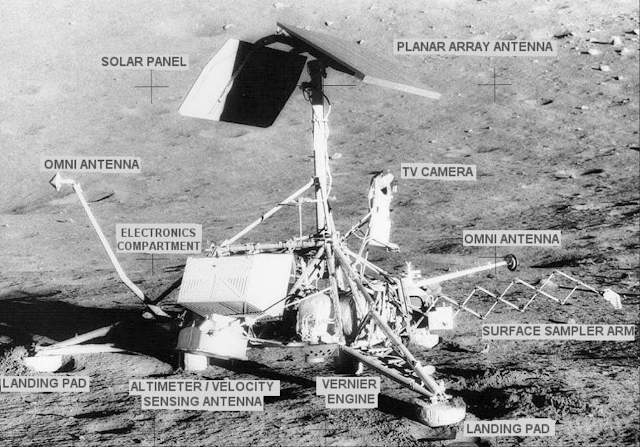 Photo of Surveyor 3 actually on the Moon, as taken by astronauts of Apollo 12 years later.

Fifty years ago, NASA continued its preparations for the Apollo program by landing another probe on the lunar surface. This was the third in the Surveyor series, built by Hughes Aircraft, and principally tasked with getting photos of the surface, and sampling the soil. This was the first space probe to include an extendable scoop to bring lunar dust to a sampling experiment on the lander. Surveyor 3 lifted off from Cape Kennedy from launch complex LC-36B on April 17. 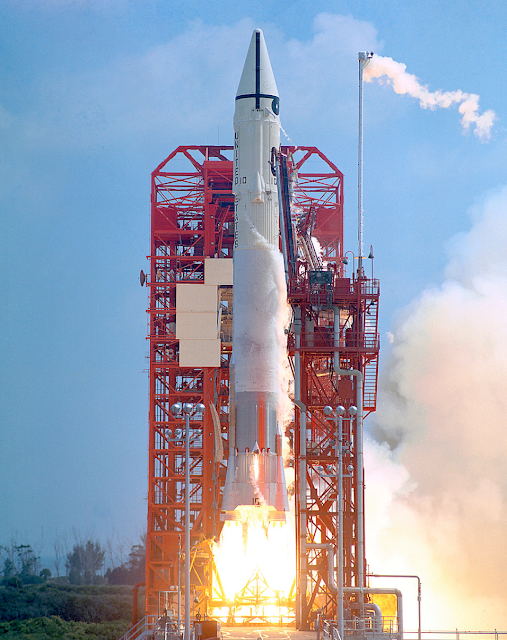 An Atlas-Centaur booster used to place the Surveyor spacecraft on the Moon. This is the one from Surveyor-1.

Surveyor 3 touched down on April 20, 1967, in the Mare Cognitum part of Oceanus Procellarum. It had a hard landing because the descent radar incorrectly calculated the altitude and shut the engine down early. It then bounced several times, as high as 10-meters on one bounce, eventually soft-landing and staying upright. Over the short time of its mission it took over 6,000 images to send to excited scientists on Earth.

One of the panorama-series of images taken by Surveyor 3.
The sampling arm on the space probe made four short trenches in the soil. Each scoop would bring the sample up to a camera that would then take close pictures of the soil appearance and then transmit the images back to Earth.
Surveyor 3 is the most famous of the seven Surveyor missions, because of what happened during the Apollo 12 mission in 1969. Astronauts from Apollo 12 landed very close to the spacecraft (on purpose!) and retrieved several pieces for return to Earth and analysis. 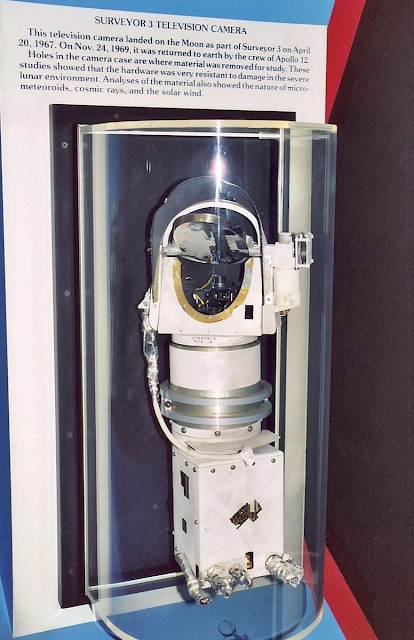 The camera from Surveyor 3, currently on display at the Smithsonian National Air and Space Center in Washington, D.C.
Theater Imaginarium
The Best Gifs of the Week, perfect for classroom use.