News from Renaissance Space Academy. When Will It Open? A Cool Space Mural at the CMSC. From the Archives: See a Video Star Trek Fan Episode Shot on the First USS Voyager and See a Younger Me Give a Tour of the Center. More Awards? Will it Ever Stop? Imaginarium Theater. 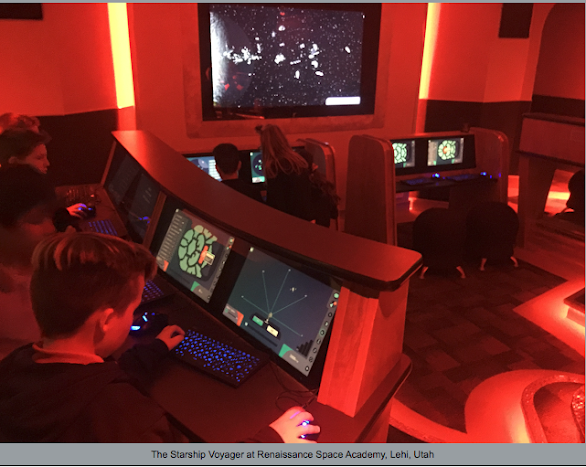 The Space Academy at Renaissance Academy is closed, thank you Covid :(  However, that is not a permanent situation.  Megan Warner has been in on Saturdays working to bring the Voyager back into working order after a long summer of disuse and school construction.  Once the Voyager is back in working order and space worthy, my staff and I will meet with Renaissance administration to outline a "Back to Space" timeline.  We hope to have the Voyager open for private missions sometime this Fall.

The after school Young Astronaut Program at Renaissance may have to wait a bit longer due to the split schedule the school is working under.  More news will be posted here on The Troubadour once it is available. 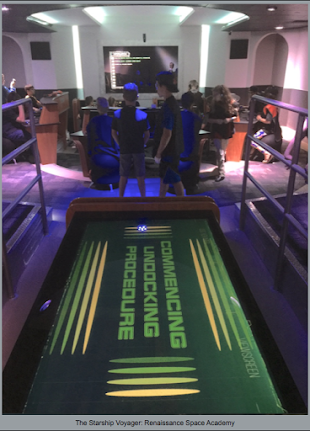 The Space Academy's InfiniD mission program may resume this Fall.  I'm working with Casey and Skyler on bringing the mobile simulator to our classrooms.  The mobile unit consists of a easily portable lighting and speaker system set up in the center of a classroom.  That unit, along with a set of chromebooks, will allow us to fly InfiniD missions for Renaissance Academy's in school daytime students.  Will wonders never cease!

The Christa McAuliffe Space Center Planetarium is Wrapped in Space. 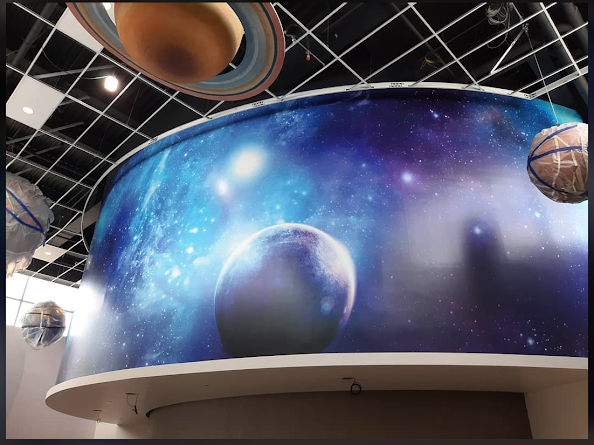 A cool space mural wraps around the outer wall of the planetarium providing a nice backdrop to the planets in the main lobby of the Christa McAuliffe Space Center.

From the Archives.  Ten Years Ago

See a short film shot on the original USS Voyager by a group from Weber University. We sure miss that simulator. It was the best.

Here we have a short film made by J&j Productions and the AAT Team of Weber University. It was a smash hit at the award ceremony. Check it out.

In that same post was this video clip showing me giving a representative from UEN a tour of the Space Center.

What? More Awards? When will it Ever Stop?

OK Troops,
It's time to pause from the drudgery of your day to day routine and pay some attention to a few awesome Space Center volunteers that recently received honors during the After Meeting on the last few Overnight Camps. 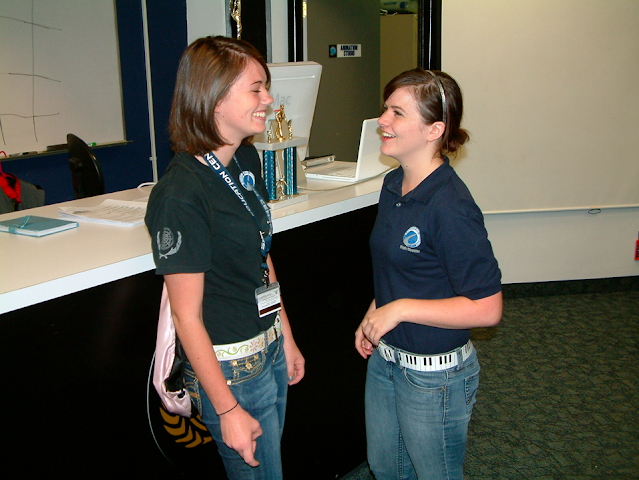 Ahem, we'll get started once we can have everyone's attention. Jacqueline Wallace, Rachel Harken we're waiting on you two. Please find a seat.
Rachel doesn't do Facebook or My Space or any of the other Your Business is My Business social web sites. She believes the best way to find out what her friends are doing is talk to them, face to face.
Jacqueline, on the other hand, prefers to keep things at a distance and doesn't like being forced into a verbal conversation covering a week's worth of news from someone that doesn't post or tweet.  "So much talk talk. It's so medieval," she was overheard saying while rummaging through the fruit on the glass display case after the camp.
Rachel had Jacqueline trapped in conversation.
Jacqueline may look at ease in the photo, but if you look closely at her right hand you'll see she isn't. She's digging her fingernail into her thumb, hoping to draw blood - thus giving her a reason to excuse herself to tend to the unexplained wound. 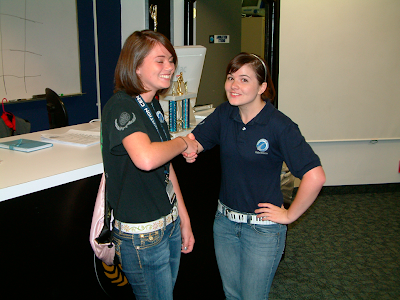 OK, it looks like Rachel is letting Jacqueline out of the conversation with a traditional Harken Back Woods Hand Shake. It's the way all the Arkansas Harkens end their visiting. With the hand shake comes an invitation to "come on over for vittles and sweet cider when the meetin is done."
(Actually, I may have this all wrong. It might be that Jacqueline is getting her Galileo Pin from Rachel. Yep that's what it is. My bad...) 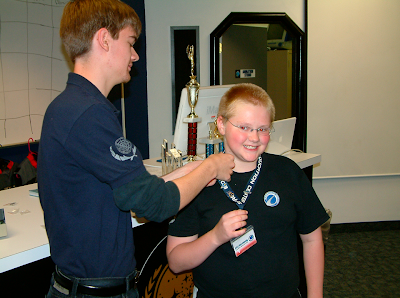 Today we celebrate the fact that Connor Larsen is still a member of the Club of the Living after the near fatal puncture of a Phoenix Pin into his neck by Phoenix Set Director Alex Anderson.
Alex is a member of the "Children should be seen and not heard" group . Actually, Alex takes their motto one step further and believes that children should not be seen OR heard, but considering the business we're in, he's had to adapt - and it hasn't been easy. It's taken a few years but I've gotten Alex to the point where he tolerates our campers and actually does a good job convincing them that he cares. He says he's living a lie every time he smiles at anyone younger than 15 but, in the interest of a pay check, his smile has become believable, although his voice sounds strained when he has to comfort a frightened small human.
You've heard in your science classes that for every action there is an equal but opposite reaction. It is true. Every time Alex forces himself into being agreeable with our customers, someone or something must be the recipient of the 'Reaction'. Today that someone was Connor.
The picture above was taken just before the Phoenix's pin penetrated one of the arteries feeding blood into Connor's brain. Luckily we had several EMT's on our staff that sprang into action and saved his life.
(Actually, I may have this all wrong. It might be that Alex gave Connor his Phoenix pin, shook his hand, walked over to the hand sanitizer, applied two squirts, deloused his hands, and sat down. Yes, I think that's how it went. Sorry.). 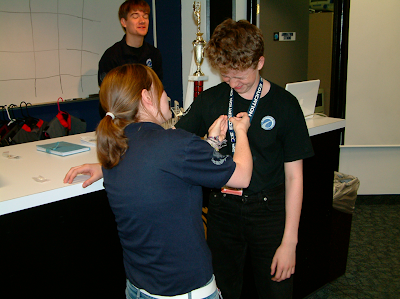 Christine Grosland comforted Eric Babb as she awarded his Odyssey Pin. He was visibly moved by the event and covered Christine's hand with tears and other drippings. Christine was a champ and hid her stomach's retching from the watching staff. Eric pulled himself together by the end of the ceremony and asked to say a few words. Forty minutes later, we moved along to the other business of the day.
Actually I think I have this all wrong as well. My reporting of Space Center news is all messed up. I seem to be exaggerating a few facts (My inability to stay true to the facts is my one true weakness I'm told). Perhaps I should appoint reporters that will get the news right. What do you think?
Thanks Troops for all your Hard Work. Our volunteers are the best in the State and I'll challenge anyone that disagrees.
Enjoy your supper and the rest of the evening. I'm leaving the Space Center now and heading home. Dave Daymont is running a Phoenix mission. Stacy Carrell is doing the same in the Galileo, and Zac Hirschi is in full swing in the Magellan. It's all go at the Space Center at 6:08 P.M. on Thursday, September 23.