The Nearly 30 Year Old Mission Canada Returns to the Space Center this Summer. Livy Charles Retires from the Starship Voyager at The Space Place. Imaginarium Theater 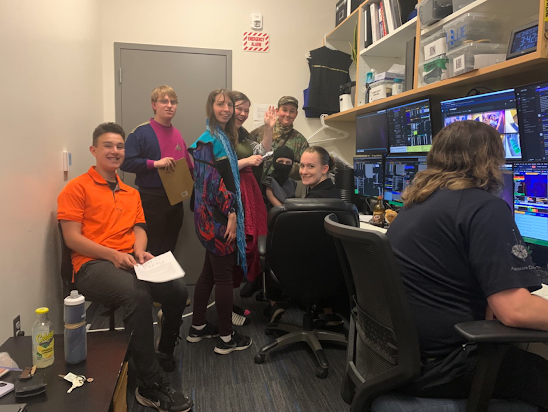 Jon Parker (right) at the FD Station.  Kaleen at IIFX, and a control room
full of volunteers and staff in costume ready to splash on the Cassini's Bridge
bringing a new season of Canada to the Space Center

The USS Canada has returned to the Christa McAuliffe Space Center.  Why is that post worthy you ask? Because the USS Canada was the first overnight mission I wrote specifically for the new Starship Voyager back in 1990-91.  Bill Schuler did the video tape for the mission and played his beloved character Admiral Schuler for the first time. 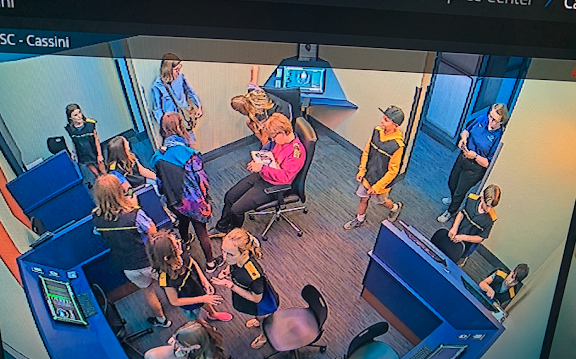 Let the mayhem behind

USS Canada was told on a semi-regular basis from 1991 to 2012 in the Voyager and then retired from the mission library - until now.  Jon Parker, set director for the Starship Cassini at the Christa McAuliffe Space Center, pulled the mission from obscurity and restored its binder to the Cassini's shelf of active missions.  Jon tells the story on this summer's Officer Camps. I'm telling it on the Space Center's Day Camps. 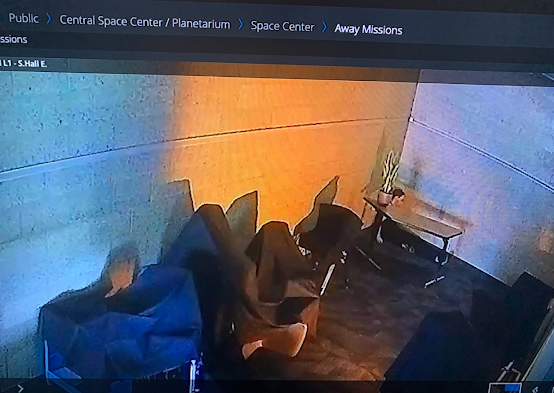 The landing party scene on the Zeewakowski. A survivor is on the floor behind the table. The plant was put there for a reason. When the Cassini crew scanned the Zeewakowski for survivors one appeared on the sensor screen. "One life form on that ship," the sensors officer said.  "It better not be a plant!" the captain responded.  So we added a plant to the scene just for that young captain.

You old Space Center veteran campers, staff, and volunteers will remember the Canada.  It, lost with the exploration ship Zeewakowski, on the other side of the galaxy reachable only through a wormhole near the Klingon border.  Remember the nebula and what happened to the ship when it entered the nebula searching for the missing ships?  Remember the fun you had playing the hallucinations?  Well, you'll be happy to see a new generation of volunteers and staff doing what you did and thrilling a new set of summer campers with a great story told by talented people.  Welcome back Canada! 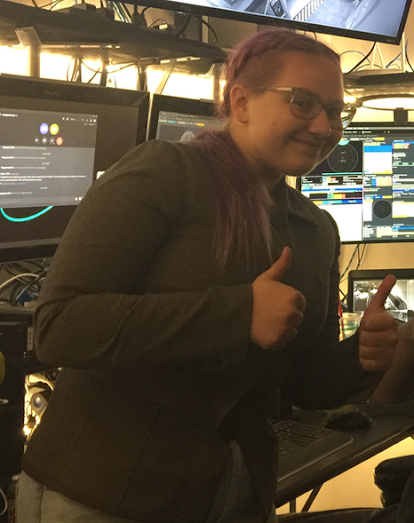 Livy in the Voyager Control Room
The Space Place at Renaissance Academy
All of us at Renaissance Academy's The Space Place are sad to see our good friend and co-worker, Livy Charles, move away to North Carolina.  She was Bracken Funk's co-pilot, working the IIFX station for most of The Space Place's Young Astronaut Club and summer camp missions.  She was training to be a flight director and flew all of the junior camps while Bracken played the roll of Captain on the bridge for the younglings. Besides being a very talented member of staff, Livy will be most remembered for her can do, extremely positive attitude.  I don't recall ever seeing her in a down mood.  Her friends at Evermore will also miss Livy. She was a regular member of their entertainment staff for the last couple years.
Goodbye Livy and good luck in North Carolina.