Our Farpoint Voyager Club met for another of its monthly edventures on February 20 at our home base - Renaissance Academy in Lehi. The Farpoint Voyager Club is sponsored by Renaissance Academy and The Space Education Center Foundation. Its sixty-five members range in age from ten to seventeen years old and attend several district and charter schools in both Utah and Salt Lake counties.  Our space exploration focused S.T.E.A.M. club meets the third Saturday of every month from 8:00 A.M. to 10:30 A.M. with a several healthy rounds of dodgeball afterwards.  The Voyager cadets also meet once every six weeks for their Long Duration Mission on the Christa McAuliffe Space Education Center's Magellan starship simulator in Pleasant Grove.
The monthly club edventures begin with three, thirty minute class periods. This year our edventures are in space history (Sputnik and the Mercury, Gemini space programs), engineering, and space center studies which include current space goals and objectives, our vision of the future of space exploration and how it can be achieved within the next one hundred years, and the technology and theory of experiential education through space simulations.  I know it sounds deep, but we enjoy ourselves.
Science fiction is a major component of the Voyager Club. Renaissance Academy is the home to the soon to open Voyager II, the finest of Utah's eleven starship simulators. The Voyager Club has the responsibility to care and maintain the new USS Voyager. Additionally, the Voyager cadets will help write missions, create instruments, program simulator controls and tactical displays, flight direct missions, and volunteer in the Voyager II.
That brings us to the second part of every monthly gathering. Voyager cadets break into their Voyager departments after the three, thirty minute classes.  Cadets can choose between the Acting / Directing Department, the Engineering / Instrumentation Department, and the Tactical / Programming Department. 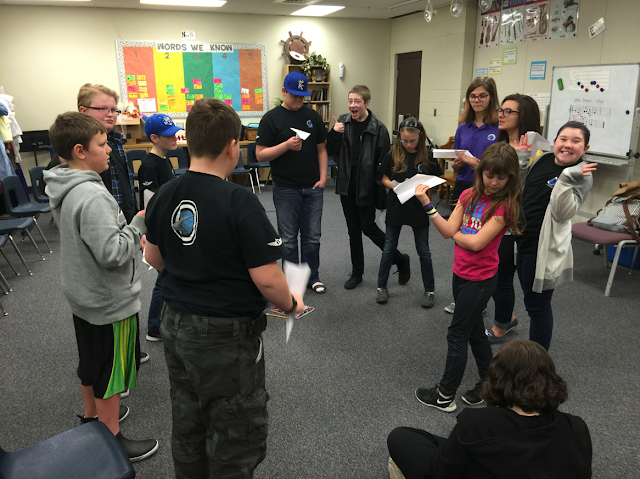 The Acting / Directing Department is coached by Lissa and Lindsey, two outstanding members of our staff.  The cadets learn both the theory of drama and its application in simulator based experiential education. The cadets you see above will be busy playing the role of multiple characters (both human and alien) in upcoming Voyager missions. 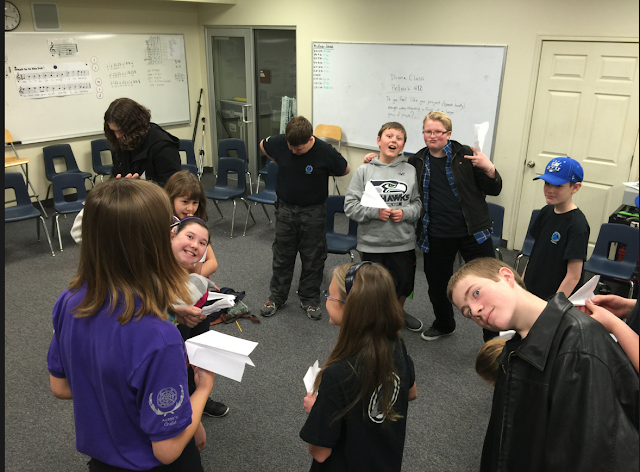 Lissa and Lindsey also direct the CMSEC's Acting Guild.  They are talented and busy. We appreciate their time as valuable Farpoint staff volunteers. 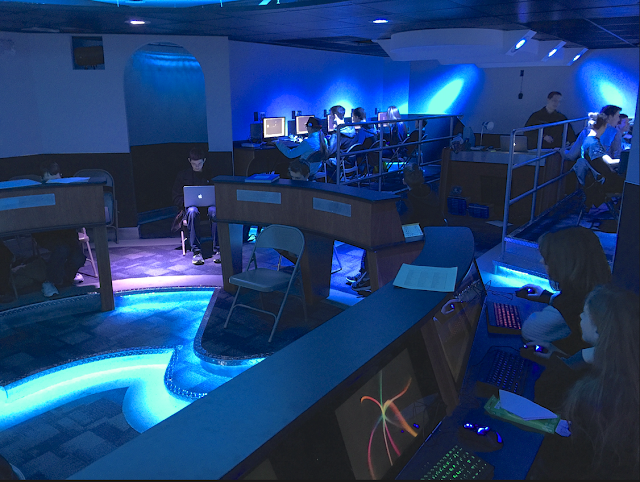 Farpoint Voyager's Tactical / Programming Department meets on the USS Voyager's bridge.  Isaac heads this department.  He is a gifted young programmer who attends Lone Peak High School in Highland. We're lucky to have him on our staff and appreciate his dedication to our club's goals and objectives. Great volunteers are hard to come by and we have the best. 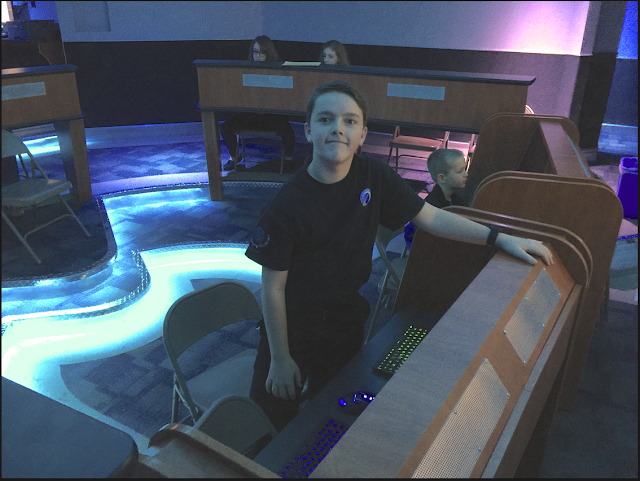 Sam is the newest member of our Voyager Club. He attends Provo High School. He has found his niche in the Tactical and Programming Department. 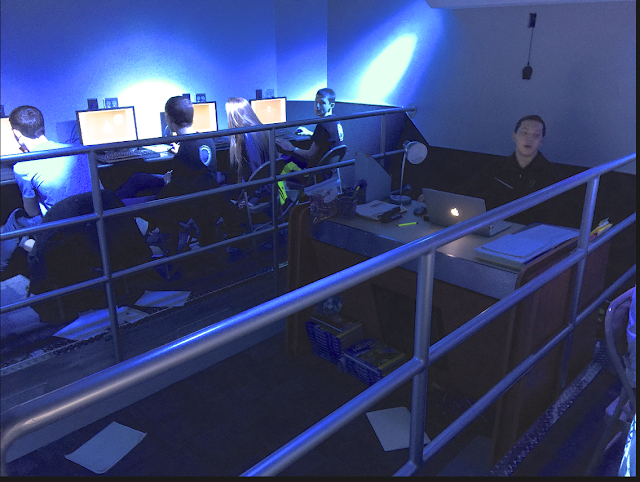 Blender was the topic for Saturday's class. Isaac's cadets will be expected to create multiple tactical cards for upcoming Voyager missions. These cadets will get to see their work used on every Voyager mission. What an awesome bragging point for their future resumes. 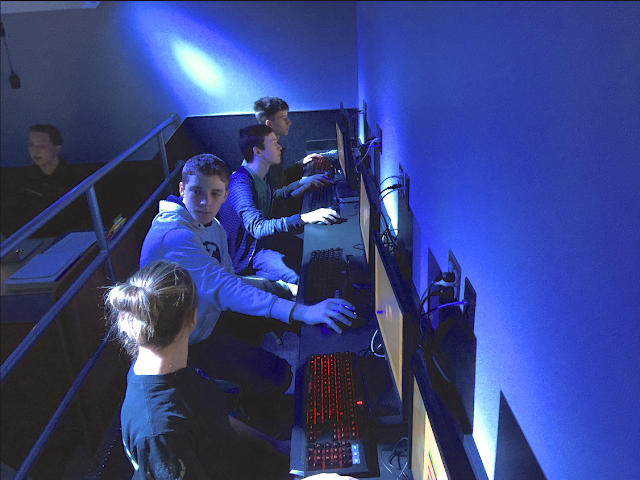 Four members of the Scorpio Squadron are seen in the photo above.  The Scorpio squadron is one of the Voyager Club's six squads competing in this year's Long Duration Mission program. 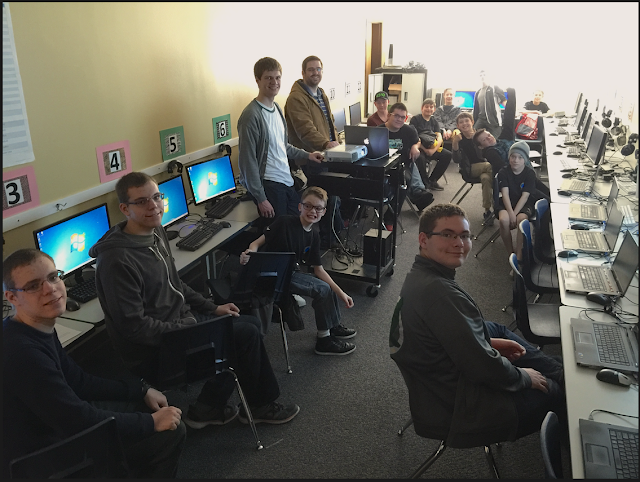 Farpoint Voyager's Engineering and Instrumentation Department met in one of the school's three computer labs. McKay, Matt, and Ben are the department's three coaches.  Voyager Engineers will be busy designing and building a new series of sci-fi phasers, programming and installing a face recognition system in the new Voyager, and designing and building several dial and switch panels for the ship.
Information about joining the Farpoint Voyager Club is found at projectvoyager.org.  We're always looking for Utah's best and brightest. Come join us. 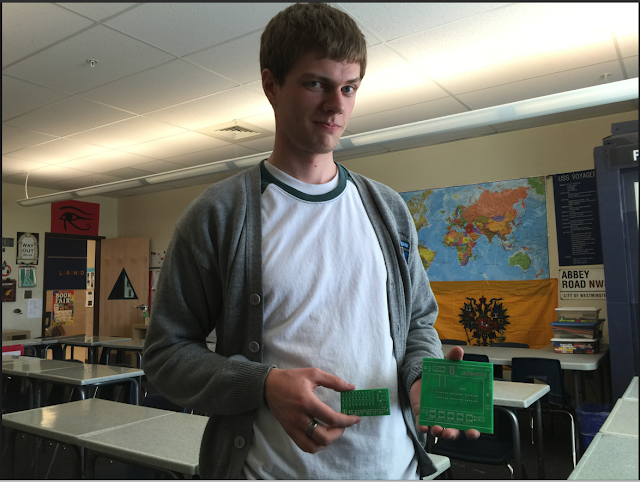 Matt Ricks is one of the Voyager Club's three Engineering and Instrumentation coaches. He attends BYU, works, and still finds time to be a Voyager staff volunteer. His cadets will assist him in the design, programming, and construction of several dial and switch panels for the Voyager II at Renaissance Academy in Lehi. 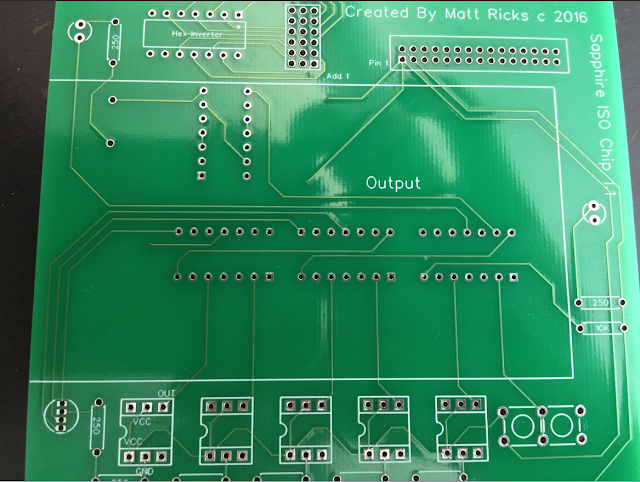 All eleven of Utah's starship simulators either have or need futuristic dial and switch boards to enhance their mission simulations.  These panels cannot be purchased commercially. Each must be custom made.  That is where Matt and his cadets come into play. Matt designs the circuit boards and sends the designs to China where the boards are made. His first designs came back last week. They are something to behold. Several more shipments will be ordered for panels to be installed and or repaired in the Voyager and the CMSEC's Magellan, Odyssey, and Galileo simulators.  The Voyager Club gives its cadet members real hands on experiences with direct applications to the educational world. Contact us for more information: projectvoyager.org