A Few Thoughts on School Reform. 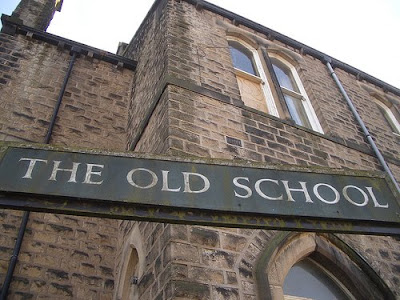 Today, a Few Thoughts from Those of Us Still Regarded as "Old School"
Hello Troops,
A few thoughts education to start this Thursday. Did you know the US already spends more on education per person than any of the the 34 wealthiest countries in the world save Switzerland?
Think of all the money being poured into our schools:

Neal McCluskey accurately described the real impact of the $4 billion Race to the Top paperwork theater: “States must say how they would improve lots of things, but they actually have to do very little. It is decades of public schooling — from the Great Society to No Child Left Behind — in a nutshell.” You need a chainsaw to cut through the bureaucratese of the winning state applications, but the bottom line is that the “race” is “won” only when school reformers get buy-in from the teachers unions.

Despite massive multibillion-dollar “investments” in teacher training, America’s educators are horrifyingly incompetent at even elementary math. Explaining why American grade-school students can’t master simple fractions, one math professor confessed: “Part of the reason the kids don’t know it is because the teachers aren’t transmitting that.” Instead, they’ve ditched “drill and kill” — otherwise known as the basics — for costly educational fads ranging from “Mayan Math” to “Everyday Math” that substitute art, self-esteem and multiculturalism for the fundamentals of computation.

And what about all the money spent on technology in schools? Nationwide, in both urban and rural school districts, large and small, technology infusions have turned out to be gesture-driven boondoggles and political payoffs that squander precious educational resources — with little, if any, measurable academic benefits. Mark Lawson, school board president of one of New York state’s first districts to put technology directly in students’ hands, told The New York Times in 2007: “After seven years, there was literally no evidence it had any impact on student achievement — none. The teachers were telling us when there’s a one-to-one relationship between the student and the laptop, the box gets in the way. It’s a distraction to the educational process.”

When will they get it?

OK, now a few of my thoughts on school reform in the few minutes I have before getting ready to teach school:
1. Hire competent teachers and pay them well. You'll attract people that can actually teach.
2. Reduce class sizes so the teacher can work with individual students. Warehousing kids must stop.
3. Give teachers a teachable curriculum with proper textbooks, workbooks and supplies. Teachers spend too much of their day preparing lessons. Let that time be spent working with students.
4. Let there be consequences for failing to learn, consequences with teeth. Parents must be brought on board. It's either educate Bobby now or society will pay the bill later with Bobby either in prison or living on welfare. Of course the one variable we can't control in this reform is what happens in the home. We can't legislate good and proper parenting and without that, Bobby's chances of success are compromised. But, if there are serious consequences for failing to advance at grade level (not taking into account learning disabilities) then the consequences must be directed at parents as well. I know it sounds harsh but this is a national emergency. Our nation's future is a stake.
5. Put children in uniforms. Level the field in school. Take as much social pressure off the child as possible.
6. Reward success. We all work for rewards (paychecks). Children need meaningful rewards. Perhaps taking some of the billions of dollars spent on useless educational programs and diverting that into college scholarships earned "as you go" would motivate students to succeed. For instance, if a child achieves at grade level and perhaps goes above and beyond then reward that child with a state or federal grant set aside for his use in college (the money would be forfeited if he didn't go to college or some form of post high school education. Bobby would think twice about dropping out of high school knowing he'd loose several thousand dollars in grants if he just sticks it out). Parents would be delighted and Bobby would have something tangible in hand for his work. These grants would be awarded at the end of every school year in a mandatory school assembly with parents on hand. Wow, imagine the peer pressure on children and parents to succeed.

OK, enough. I've got to go to work. I have a math class to teach and field trips to run. I'm in the classroom now 28 years and I don't like the direction things are going.

Take what I say or leave it. It is your choice. It just does me good to shout out my frustrations from time to time and hope someone that can do something about it will listen.