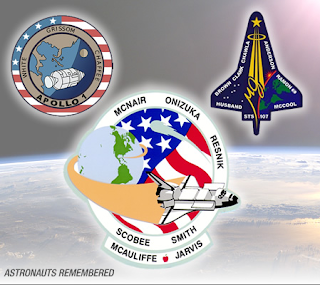 Today has been set apart as a Day of Remembrance for the lives lost during the great exploration of Space. Although we specifically honor American lives lost, we also remember the lives lost by the Russian explorers in tragic accidents of the past.
As symbolized in the space patches shown above, we specifically remember the loss of Apollo 1 on the test pad in 1966, the crew of the shuttle Challenger in 1986, and the loss of the crew of the shuttle Columbia in 2003. All these brave men and women were lost due to mechanical errors, and each was different from each other. That means we learn from our mistakes and press on, overcoming the obstacles to achieving the goal of making risky space exploration as safe as we can.
Every year when we commemorate our fallen space explorers, we are told that the explorers felt the risk was worth it. History proves that this is generally true. Closer to Earth, think about the many losses in the past of exploration history. How many voyagers lost their lives to unexpected storms crossing the oceans to discover opportunity in the New World? How many lives have been lost in the attempt to conquer air travel? And don't forget that lives have been lost by explorers who have sought adventure discovering underground passages and treasures.
But today we remember men and women like Ed White (first American to walk in space) who perished in the fire of Apollo 1, Christa McAuliffe (chosen to be America's first teacher in space) who was killed in the Challenger explosion, and Ilan Ramon (first Israeli to fly in space) who died in the breakup of Columbia during re-entry.
While Senators, Representatives, and Presidents argue over how much money to cut from NASA and cannot find a consistent path for our American space program, let's remember the true cost of space exploration and remind ourselves that we cannot let those sacrifices be made in vain. In a year that will see the end of a major space program, let's hope that we may also see the birth of a compelling and exciting new space exploration program.
For more information, go to NASA's website commemorating the losses of our explorers: http://www.nasa.gov/externalflash/dor11/
Posted by Space Camp Utah at 8:01 AM