Tuesday. January 11. A Rant for the Day. Excuse me while I get up on my Soapbox.

Hello Troops,
International standardized test results are in. As predicted, American students did poorly in all subjects and measurements except one when compared to their counterparts in the industrialized world. Can you guess which area American students excelled? 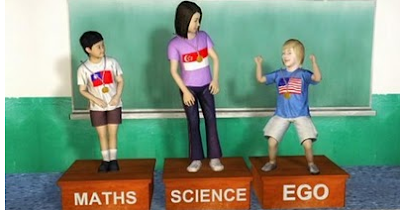 Yes, its Self Esteem. Why is that you wonder? Because our American culture is overly focused on creating schools that make students feel good about themselves, even if their scores, behaviors and attitudes don't warrent such praise. Praise is given where it is not deserved. Rewards are presented when they are not earned. It is all in the effort to 'make the child feel good about himself'.

May I used a term to describe my feelings on the subject? Hogwash.

If we continue on this misguided course we'll have lines of unemployed people who feel good about themselves but have no marketable skills and can't provide for themselves or their families. The focus of the world's economy would have shifted eastward across the Pacific. These people will complain that "no one cares" and wonder why "someone doesn't do something for them". They will remind each other how special they are as they stomp their feet in the cold and grumble that life isn't fair. Wow, a reality lost on an entire generation.

I've traveled the world. I've been to 28 countries. I've visited their schools. If we don't wake up and begin demanding excellence from our students, teachers and schools (and of course parents, because if parents don't enforce excellence at home then everything schools do becomes pointless) then we will find the sun setting on this country's future and shining brightly on Asia. 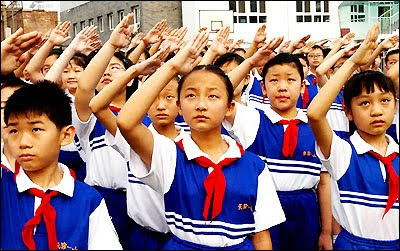 Meet your future employers and creditors.
Sobering isn't it? And it may be too late to turn the tide.
Go on, Ask them how they feel about themselves? Laughable isn't it?
Amdrew Lam in New America Media wrote:

That Asian-Americans dominate higher education in the last few decades in America is also worth noting. Less than 5 percent of the country’s population, Asian-Americans typically make up 10 to 30 percent of the best colleges. In California, Asians form the majority of the University of California system. And at University of California, Berkeley, Asian freshmen have reached the 46 percent mark this year. Also worth noting is that of the Asian population in the United States, two out of three are immigrants, born in a continent where self-esteem is largely earned through achievements, and self-congratulatory behaviors discouraged, and more importantly, humility is still something of a virtue.

In the East, the self is best defined in its relation to others – person among persons – and most valued and best expressed only through familial and communal and moral deference. That is far from the self-love concept of the West – where one is encouraged to look out for oneself, and truth seems to always originate in a minority of one.

In much of modernizing Asia, of course, individualism is making inroads. The Confucian culture that once emphasized harmony and unity at the expense of individual liberty is now in retreat.

But if there’s a place in Asia that still vigilantly keeps the ego in check, if not suppressed, it’s the classroom. In Asia, corporal punishment is still largely practiced. Self-esteem is barely a concept, let alone encouraged. Though not known to foster creativity, an Asian education with its emphasis of hard work and cooperation, critics argue, still largely provides the antidote to the culture of permissiveness and disrespect of authority of the West.

In the West, the word kung fu is known largely as martial arts. It has a larger meaning in the East: spiritual discipline and the cultivation of the self. A well-kept bonsai is good kung fu, so is a learned mind and so, for that matter, is the willingness to perfect one’s guitar playing. East and West may be commingling and merging in the age of globalization, but beware - that ubiquitous baseball cap that Funtwo is wearing on YouTube can mislead - it houses very different mentalities in Asia - for when it comes to the perception of self, East and West remain far apart.

Has the emphasis for self-confidence gone too far in America? Take the French tune "Frere Jacques" in preschool, for example. French children may still sing it as “Brother Jack! You’re sleeping! Ring the bells!” But in America the once innocuous song has been converted to: "I am special! I am special! Look at me! " No surprise that the little train that could is exhausted: it’s been laden with super-sized American egos.

In a classic 1992 study, psychologists Harold Stevenson and James Stigler compared academic skills of elementary school students in Taiwan, China, Japan and the United States. It showed a yawning gap in self-perception between East and West. Asian students outperformed their American counterparts, but when they were asked to evaluate their performances, American students evaluated themselves significantly higher than those from Asia. “In other words, they combined a lousy performance with a high sense of self-esteem,” noted Nina H. Shokraii, author of “School Choice 2000: What’s Happening in the States”, in an essay called “The Self Esteem Fraud.”

Troops, don't misread this by saying that self esteem has no place in our schools because it does. What I'm saying today, as I've said in the past, is too much of anything is bad. Schools should be institutions of encouragement and "the skies the limit" not an overemphasis on 'how everyone feels today'.

It is time to roll up our sleeves, put away the electronics and study. It is time to take the hard classes. It is time to demand teachers that hold your feet to the fire and not pat you on the head and send you on your way with a sucker and good helping of self esteem. Don't accept praise unless it is really earned. Give back the silly 'participation' ribbon when given and shock them to their core by saying: "I didn't win. In fact, I sucked. Why are you giving this to me?" It's time to refocus attention on schoolwork. We have the American Dream to protect and it all begins in the classroom and at home.

P.S.
How about a smile to end the day. You deserve it for reading my ranting. This is a bit of sci-fi crossed with a children's classic. 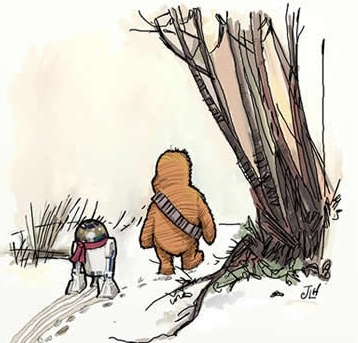 Wookie the Chew
Posted by Space Camp Utah at 7:03 AM

Amen! Let it be known that there is no extra credit, test retakes, or grade bending because you make sad faces in Mr. Porter's class. I hate the end of the term not because of how busy it is, but the endless excuses after the fact. I've been reminding you daily to study for the test and do well the first time. Your parents have had constant access to your grade with the internet so their surprise at a D on your report 4 days before the end of the term will not change your grade. Hopefully with all of this you might change your habits and priorities. Yes, C is average and the effort you put in was average. There are only a few A's in my class and they deserve it.

Don't take it the wrong way, I do have students with varying circumstances and I do my best to help them. They need the self esteem because they have been passed between foster care parents or other terrible upbringings. That is not who I am talking about above. Stay strong fellow teachers, hold them to what they did. GIVE HOMEWORK!

AMEN!!! * Though my font size option doesn't get big enough to really express my concurring feelings with your "rant". AMEN!!